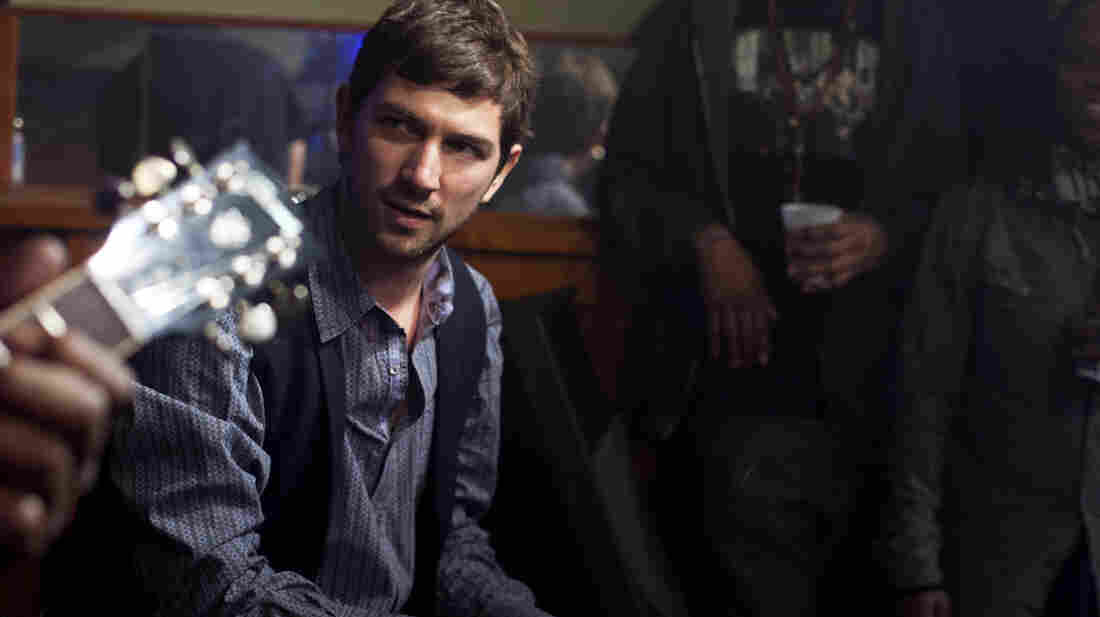 The actor Michiel Huisman has actually moved to New Orleans from Amsterdam, much like his character Sonny. Paul Schiraldi/HBO hide caption 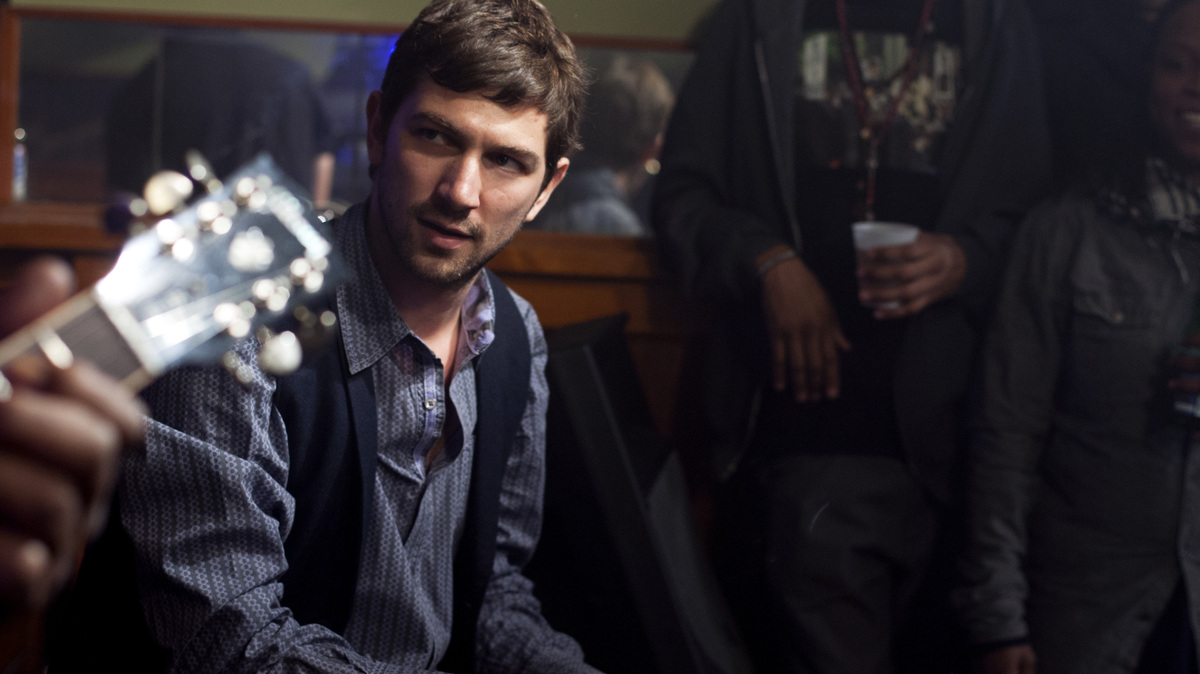 The actor Michiel Huisman has actually moved to New Orleans from Amsterdam, much like his character Sonny.

We've reached episode three of Treme's third season and things are starting to get interesting. Through the Everett, Lt. Colson, Toni Bernette and Nelson storylines, we begin to see how deep police and government corruption runs in New Orleans. Davis is funding his next scheme; Janette is funding her next restaurant; Annie is funding her next musical adventure. The possible endgame for Chief Lambreaux (and by extension, his son) draws near. And a lot of dudes get laid.

The soundtrack to this week features a number of old-school Louisiana legends. Filling in the gaps, as always, is Josh Jackson of WBGO. Here's our email conversation.

Patrick Jarenwattananon: We begin this episode with a certain power-tripping cop — but even before that, we see Delmond taking a blues gig. Who's the performer here? I don't recall seeing him before in the show.

Josh Jackson: That's Ernie Vincent, one of a few old-school blues and funk bandleaders left in the city. He and his band, the Top Notes, have been active locally for decades. They're playing "Dap Walk," a song Vincent cut in the early 1970s for Fordom Records, a local imprint from the Hollygrove section of New Orleans.

Mind you, this happened before some of the Dap-Kings were born. Dap is a type of salutation that has existed long before E.D. Hill of Fox News suggested interpreting it as a "terrorist fist jab." Lord knows that wouldn't make a very cool tune.

PJ: Now, I have previously seen the fellow at Davis' house, the one singing and playing the piano. A shame that the music business appears to have screwed another (black) living legend out of his royalties, although I can't say I'm surprised anymore.

JJ: That's Al "Carnival Time" Johnson. We've mentioned before that Al was shafted by the unseemlier aspects of publishing and royalties licensing that were rampant during the heyday of R&B hitmaking.

In this scene, Johnson plays "Mathilda," a popular local song by the progenitors of the swamp-pop sound, Cookie and the Cupcakes. They were a band from Lake Charles, La., west of New Orleans. They recorded "Mathilda" for Lyric Records, run by producer George Khoury. He took credit for the song, like he did with another popular song most people know, "Sea of Love." As these songs gained distribution beyond Louisiana, often from major labels or their subsidiaries, the sales proceeds were not often distributed equitably to the people who actually wrote them.

PJ: The next music scene features some real legends — so special we see them performing twice. That's Tab Benoit on the left, the scraggly Anders Osborne on the right, and Big Chief Monk Boudreaux, in full garb, in the middle. As Antoine explains later to his lady, it's a charity project for the eroding swamplands of the Mississippi River Delta. You were telling me about this Voice of the Wetlands thing once.

JJ: Yeah, I'm not much of an activist, but I do care deeply about this effort, as the majority of my family lives in Lafourche and Terrebonne parishes. Coastal erosion is a very serious issue, and it has come largely as a result of commercial petroleum and the massive 20th-century engineering projects that rerouted the natural order of the Mississippi River. It's complicated, but the outcome is that a significant portion of south Louisiana is washing into the Gulf of Mexico, and people are witnessing the erasure of "home" in only a few generations. Voice of the Wetlands is bringing awareness to it. More needs to be done.

The band plays "We Make a Good Gumbo" and "Me Donkey Want Water." That second tune comes from a very famous calypso, "Hold 'Em Joe," popularized by Harry Belafonte. (Sonny Rollins loves this tune also, and his own "St. Thomas" follows this scene.) An earlier version of the song by the calypsonian Macbeth the Great includes the line "Me donkey want water / Better hold your daughter" — dig the innuendo?

"Me Donkey Want Water" lends its name of this episode. Consider that Antoine, Nelson, Sonny and LaDonna's husband, Larry, are all getting their donkey some water this episode. Therein hangs a tale.

PJ: Annie is on the road now with the Cajun band. We hear a song with the line, "He always said Louisiana was where he felt at home." (And we get a tease that we may see Wilco on the show in the future.)

JJ: Annie and the band sing "Lake Charles," a Lucinda Williams tune from Car Wheels on a Gravel Road. As for Wilco, the band's bassist, John Stirratt, is a native of New Orleans. (He's also one of the two remaining original members of the band — i.e. he played on the debut album A.M., which was referenced in the show.) Wilco has played benefits for the New Orleans Musicians Relief Fund and the Preservation Resource Center of New Orleans. There's a very strong connection here.

PJ: Sonny continues to gig with the blues band. Although his lady's father doesn't seem to think the world of Guitar Lightnin' Lee.

JJ: Well, he doesn't seem to be a fan of the message in "Good Lover." Better hold your daughter.

PJ: Finally, we haven't talked much about the background music this season. Anything catch your ear?

JJ: Yes, we heard some banda music in this episode — a different type of brass and vocal music than what you're accustomed to hearing in New Orleans. Construction work after Katrina increased the number of Mexican laborers in the city. So we hear music from the Sinaloa region of Mexico, an area regrettably known more for its drug cartel these days. Los Buitres De Culiacán Sinaloa's "Llámame, Escríbeme" plays during the scene while Albert Lambreaux finishes his plastering work, and El Chapo de Sinaloa's "Si Te Agarran Las Ganas" blasts from a vehicle while Sonny is waiting for his girl.

I heard a Willie Tee (Wilson Turbinton) song, "Teasin' You," playing on the radio when LaDonna picks up her boys for school. Tom McDermott's version of "Lil Liza Jane" emanates from a car stereo. There were some instrumental background moments from Nicholas Payton, Irvin Mayfield and Dr. Michael White during Annie and the agent's dinner at the restaurant Stella. Drummer Shannon Powell's "SP" plays at the coffee shop when Colson talks to Sofia. I loved hearing Allen Toussaint's "Victims of the Darkness" while LaDonna lays down the rules for Delmond.