Accessibility links
The 'Class Presidents' Of Art Blakey's Jazz Messengers : A Blog Supreme From the mid-'50s to 1990, the drummer's band served as a finishing school for elite jazz musicians. Here are five of the distinguished alumni of Blakey's university of the streets, including Horace Silver, Terence Blanchard and Wayne Shorter. 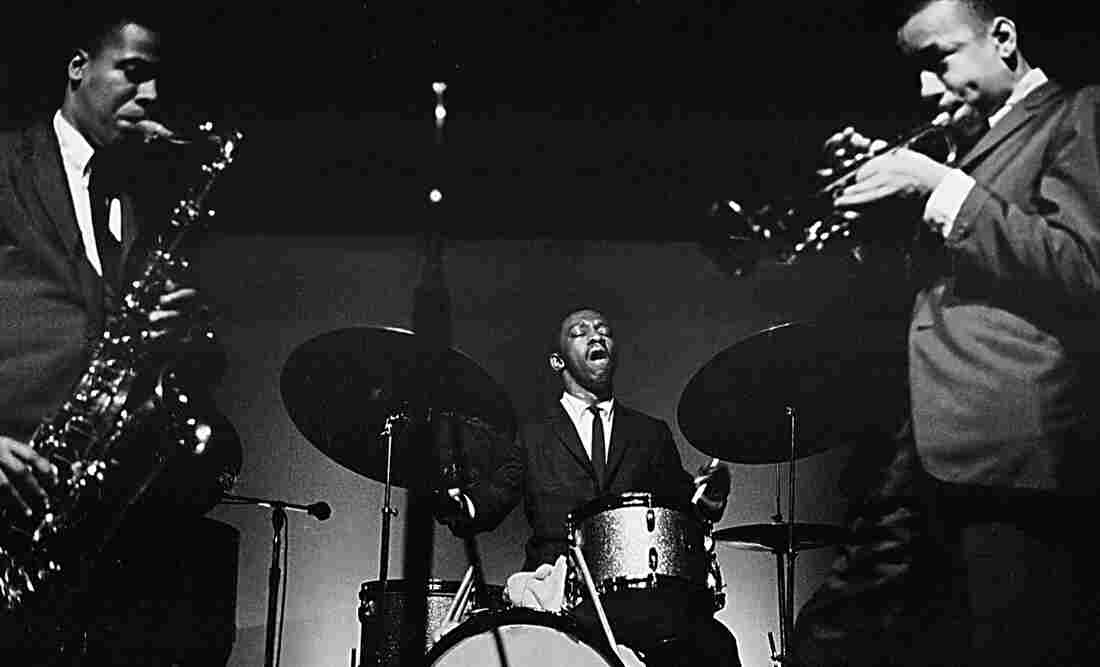 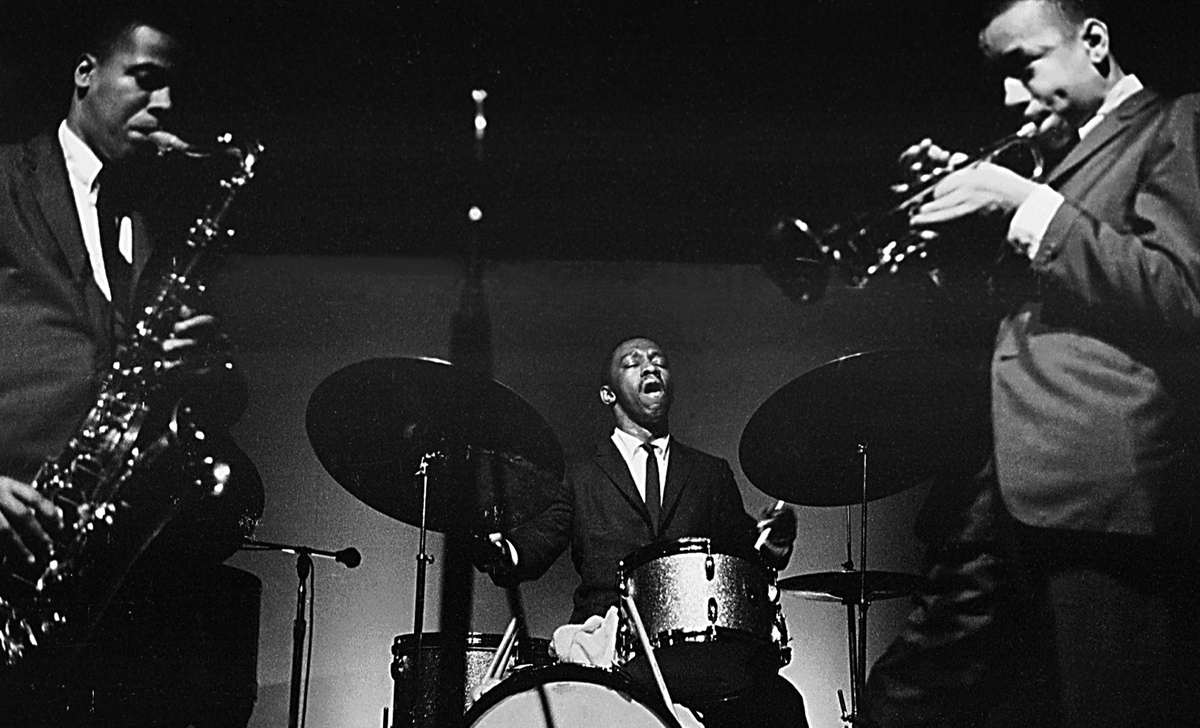 My fellow Americans, jazz fans, and NPR Music browsers around the globe:

There is a U.S. presidential election contest going on, as I'm sure you've noticed. But I come to you today on the birthday anniversary of the great drummer and bandleader Art Blakey (born Oct. 11, 1919) to speak of another kind of president: the "class presidents" from Blakey's long-running Jazz Messengers. The hard-bop ensemble Blakey ran functioned as a veritable school of jazz musicianship from 1954 to 1990.

Many other musicians have cultivated younger talent in their ensembles, but nobody nurtured it to the extent that Blakey did. (Blakey eventually pushed his fledglings out into a post-Messengers world, both for their own good and to make way for new players, saying, "This isn't the post office, you know." ) After Blakey died in 1990, saxophonist and former Messenger Jackie McLean said, "The school is closed." Its lessons have endured, as have many of its pupils.

Here are five Messenger "class presidents" who helped shape or sustain the sound of the Jazz Messengers over the course of the group's 36-year history. Happy birthday, Bu! 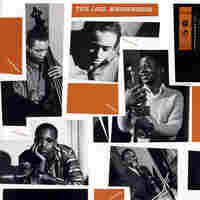 Pianist Horace Silver was the Jazz Messengers' original leader and, along with Blakey, the group's co-founding father. His punchy, percussive, hard-swinging, funk- and Latin-fueled compositions and rhythms played a key role in establishing the band's musical identity. "Nica's Dream," an early Silver entry in the jazz canon (a tribute to patron Baroness Nica de Koenigswarter), puts one of the first superlative editions of the Messengers on display, with trumpeter Donald Byrd and saxophonist Hank Mobley manning the horns, while bassist Doug Watkins helps Blakey and Silver propel the rhythm section.

Saxophonist Benny Golson's stay with the Messengers was relatively brief but significant. He galvanized the late-1950s group through his compositions and the musicians he brought into the band, stocking it with fellow Philadelphians such as trumpeter Lee Morgan, pianist Bobby Timmons and bassist Jymie Merritt. That musical foundation would carry Blakey into the early 1960s and produce an immediate hard-bop classic in the form of the LP Moanin'. "Whisper Not" – here, performed live in 1958 — is one of several jazz standards that Golson wrote in the fecund years around and during his Messengers tenure, including "Along Came Betty" and "Blues March." (Note: This performance is not from the listed album, but is available on a Jazz Icons DVD.) 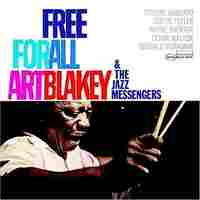 Wayne Shorter was an amazingly prolific composer in the 1960s, composing numerous tunes for Blakey, his subsequent boss Miles Davis and his own outstanding Blue Note record dates as a leader. He was also one of the longest-serving Messengers, working with the band from 1959 to 1964 — glory years that included the arrival of trumpeter Freddie Hubbard and trombonist Curtis Fuller. The 1964 album Free for All is the thundering culmination of the Shorter-Hubbard era, and the title track (written by Shorter) kicks off with a keenly passionate solo from the saxophonist who sets the table, cooks the food and raises the roof for musical authority in the house. 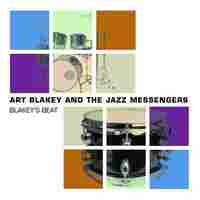 The mid-1960s through the mid-1970s were a sometimes-challenging stretch for the Jazz Messengers, as Blakey's brand of hard-bop fell out of stylistic favor. Keith Jarrett and Chuck Mangione did brief stints with the band (documented on the album Buttercorn Lady), as did Woody Shaw, and there are plenty of interesting moments on record throughout those years, but no particularly notable editions of the band managed to cohere. That changed with the arrival of pianist James Williams and alto saxophonist Bobby Watson in 1977. Steeped in the Messengers albums of the early 1960s, as an arranger and composer Watson was able to invoke the classic elements of the band's sound and extend it into what Messenger chronicler Alan Goldsher calls "the post-bop of the 1980s" — an ability shared by Williams, who infused the piano chair with harmonic vigor. This live 1981 performance of Watson's composition "E.T.A." also gives us a chance to hear another key Messenger, the young Wynton Marsalis, while he was still just a staggeringly talented and exciting trumpeter in his teens. 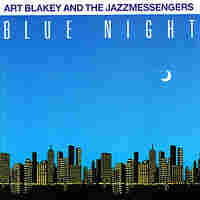 Two of a Kind

Like Shorter, Watson and Williams, Terence Blanchard did a lengthy tour of duty with the Messengers; also like them, he provided musical direction for the band. The immediate successor to rising star Wynton Marsalis in the trumpet chair, Blanchard eventually stepped out from the shadow of his fellow New Orleans native and forged his own stylistic way through the neo-classical world of 1980s jazz. This 1985 recorded performance of Blanchard's heraldic-bop composition "Two of a Kind" comes from a recording which features several late-period Messenger heavyweights, including saxophonists Donald Harrison and Jean Toussaint, pianist Mulgrew Miller and bassist Lonnie Plaxico.