Accessibility links
For The Love Of James Moody: Five Tributes : A Blog Supreme Reedman Paquito D'Rivera called him "the most beloved jazz musician in the world." Naturally, a lot of fellow musicians are lining up to pay tribute to the man during a jazz festival named in Moody's honor. Here's a chance to explore their connections to the great saxophonist. 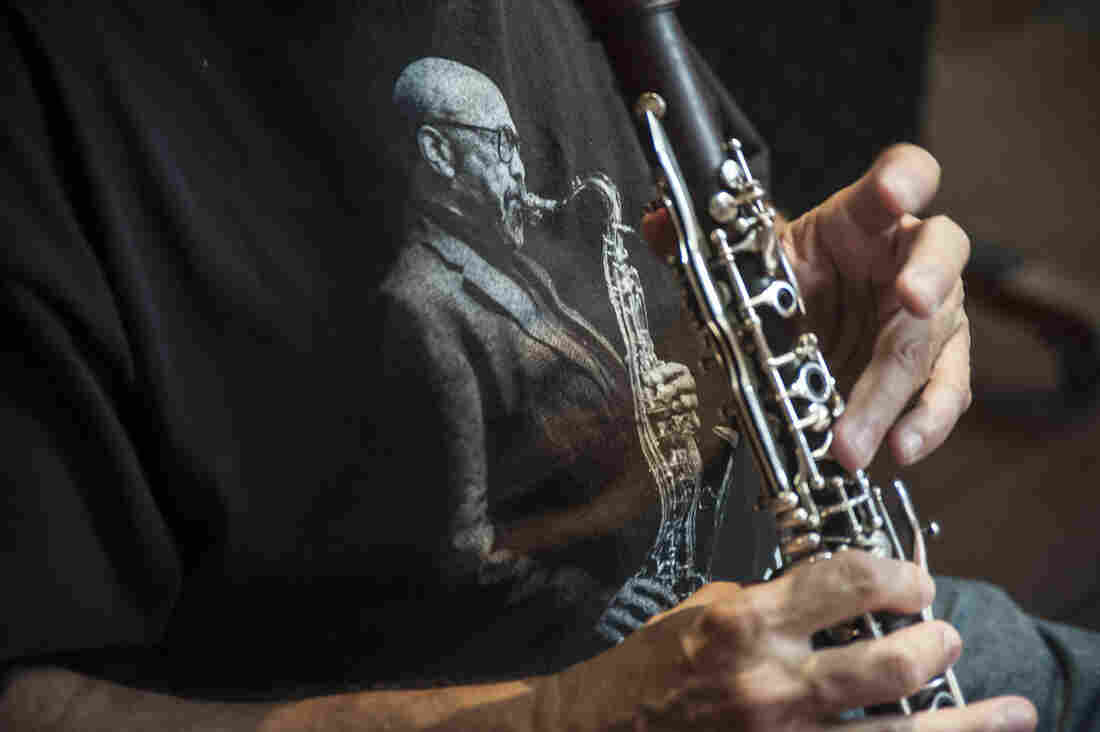 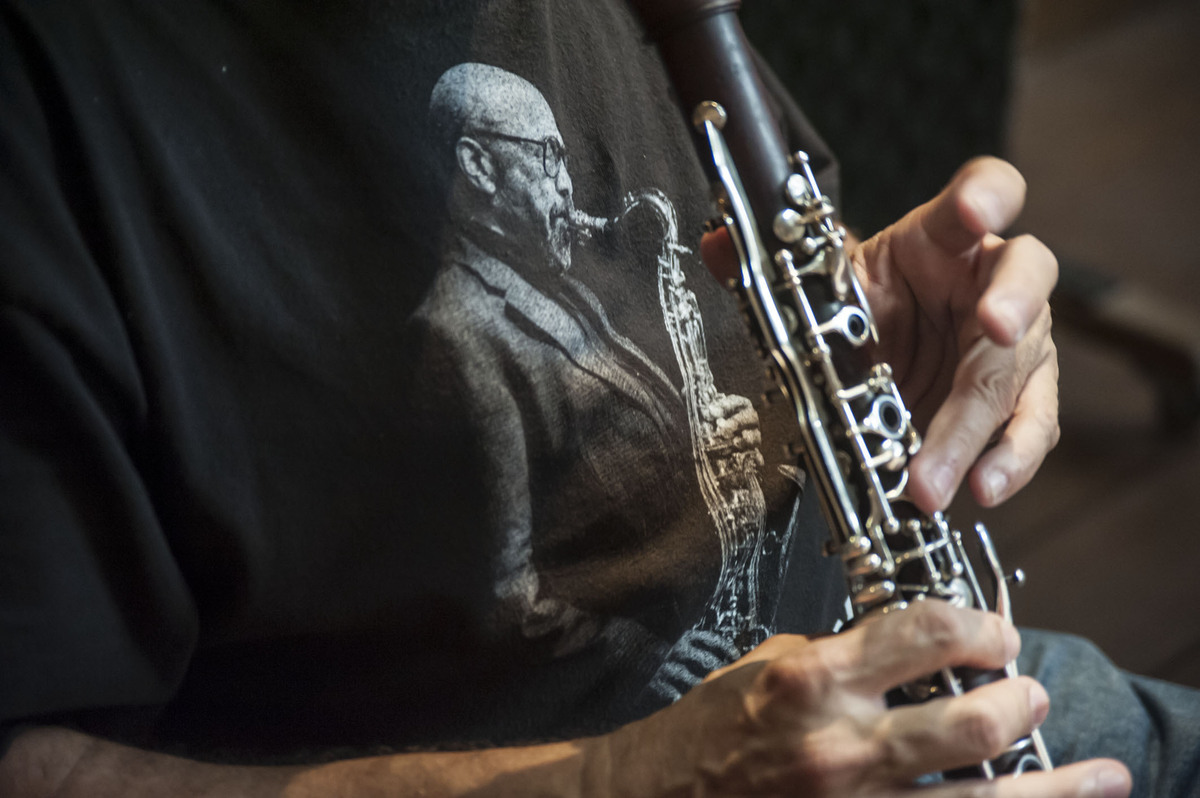 Jorge Rosenberg/Courtesy of the artist

"James Moody is the most beloved jazz musician in the world," reedman Paquito D'Rivera says.

These may be strong words, but D'Rivera is far from alone in his appreciation of the tenor saxophonist, who died in 2010. On the bandstand, Moody was universally admired for his musicality, his generosity — he gave away mouthpieces, saxophones and, once, even the coat off his back — and his ability to illuminate any room with his personal warmth.

"He always had this big smile on his face," pianist Kenny Barron says. "Whenever he saw you, you got a big hug and a kiss on the cheek. He was just always that way."

Barron and Moody played together over the course of 40 years, and it was Moody who persuaded Dizzy Gillespie to hire Barron for his first big gig in 1962, when he was only 19.

"Moody was so humble — he always felt like he needed to learn more," Barron says. "He'd say, 'Hey, can you play these chord changes for me? I'm not really getting it.' Of course, when you did, he'd eat 'em up!"

D'Rivera and Barron are just two of the dozens of Moody's famous friends, including Jimmy Heath, George Benson and the Manhattan Transfer, who perform Friday night in the "For Love of Moody" concert at the New Jersey Performing Arts Center. The event raises money for a scholarship fund bearing Moody's name, and is the keystone of the inaugural James Moody Democracy of Jazz Festival — a weeklong celebration of the saxophonist's legacy in his hometown of Newark — which runs through Sunday.

"He was one of the most giving human beings," Heath says. "Everybody who knew Moody knew he was a beautiful person."

The musicians will perform round-robin style in a "living room" created on the stage of NJPAC's Prudential Hall. Jokes will be told and stories shared. Moody, who often played practical jokes to break the tension in any room he found too stuffy, would have liked this informality, Barron says.

"Moody just had that enthusiasm and lust for life, you know?" he said.

Here's a list of five recordings by artists playing Friday's concert. They all capture moments when the musicians shared the stage with Moody, or were inspired by him. For more coverage of the James Moody Democracy In Jazz Festival, visit the WBGO blog.

"Moody's Mood for Love" has been recorded many times over: first in 1949, when Moody recorded an improvisation in Sweden to the pop song "I'm in the Mood for Love," and then again when Eddie Jefferson wrote and sang lyrics to Moody's bebop melody. The singer King Pleasure even scored a hit with the tune, after he heard Jefferson's version at a club in 1952 and rushed to a studio to record it himself. Guitarist George Benson made it a hit once again in 1980, when he sang and played this version on his Quincy Jones-produced album Give Me the Night. The track features a vocal interlude by Quincy Jones' goddaughter, singer Patti Austin.

Moody and Kenny Barron played together for four years in Dizzy Gillespie's mid-'60s band, but they were close musical collaborators and friends for four decades. The remarkable musical synergy and intimacy they developed can be heard on a 1973 version of "Autumn Leaves" (opens Spotify), which captures the pair without Gillespie, but with Larry Ridley on bass and Freddie Waits on drums. Check it out on the Moody album Feelin' It Together.

Moody's last recording session was captured just a few months before his death, when he made a guest appearance on vocalist Cheryl Bentyne's album of Cole Porter songs, Let's Misbehave. Bentyne is also the soprano in the vocal quartet Manhattan Transfer, and Moody made a Grammy-winning guest solo on the group's 1985 album Vocalese. When they recorded their version of "What Is This Thing Called Love" (opens Spotify), both Bentyne and Moody had been diagnosed with cancer; Bentyne has since recovered, and will perform with Manhattan Transfer on Friday night. The song opens and closes with confident, swinging solos by Moody, which brim with ingenuity and undimmed optimism.

Moody and tenor saxophonist Jimmy Heath called each other "section," because both occupied seats in the saxophone section of bands led by Dizzy Gillespie, occasionally together. In honor of his section-mate, Heath wrote "Moody's Groove" on the occasion of Moody's 80th birthday in 2005. The tune is often played by the Dizzy Gillespie All-Star Band, a group of veterans of Gillespie's ensembles, and one which reunited Heath and Moody as section buddies once again. Courtesy of JazzSet, you can hear the All-Star Orchestra play it on the occasion of Moody's 80th birthday party at the Kennedy Center, with an introduction from Heath.

Paquito D'Rivera And The United Nation

As the two floated in a pool at the Hotel Nacional in Havana, Dizzy Gillespie asked the Cuban saxophonist Paquito D'Rivera: "Do you know James Moody?" It was May 1977; Gillespie was in Cuba as part of an informal goodwill mission after President Jimmy Carter briefly decided to relax Cold War travel restrictions to the island. When D'Rivera came to the U.S. in the 1980s, he and Moody would play together in Gillespie's United Nation Orchestra, an international band that gathered many of the talented young musicians Gillespie had met in his travels across Latin America (including three Cubans, three Brazilians, a Panamanian, a Puerto Rican and a Dominican). They recorded this version of "Tin Tin Deo" at London's Royal Festival Hall in 1989, with solos by both Moody and D'Rivera. Of course, Moody also recorded the original version of this song in 1947, along with its composer, Cuban percussionist Chano Pozo.