Accessibility links
A Brief History Of Jazz Education, Pt. 1 : A Blog Supreme Today, institutions of higher learning — high schools, summer camps and university-level programs — are an industry unto themselves, dominating formal jazz pedagogy. But before they arrived, many creative individuals had plenty of reasons to seek them out. 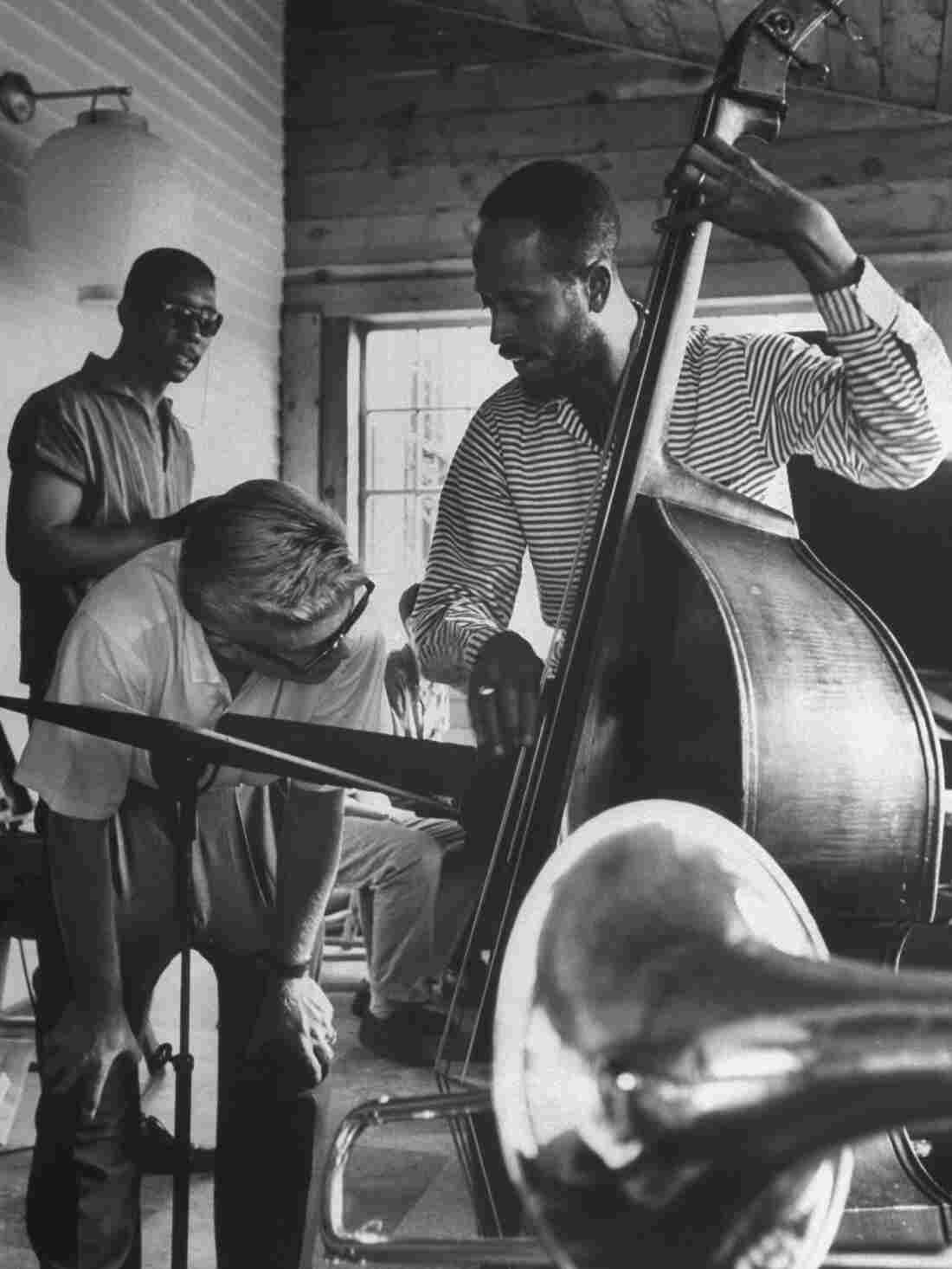 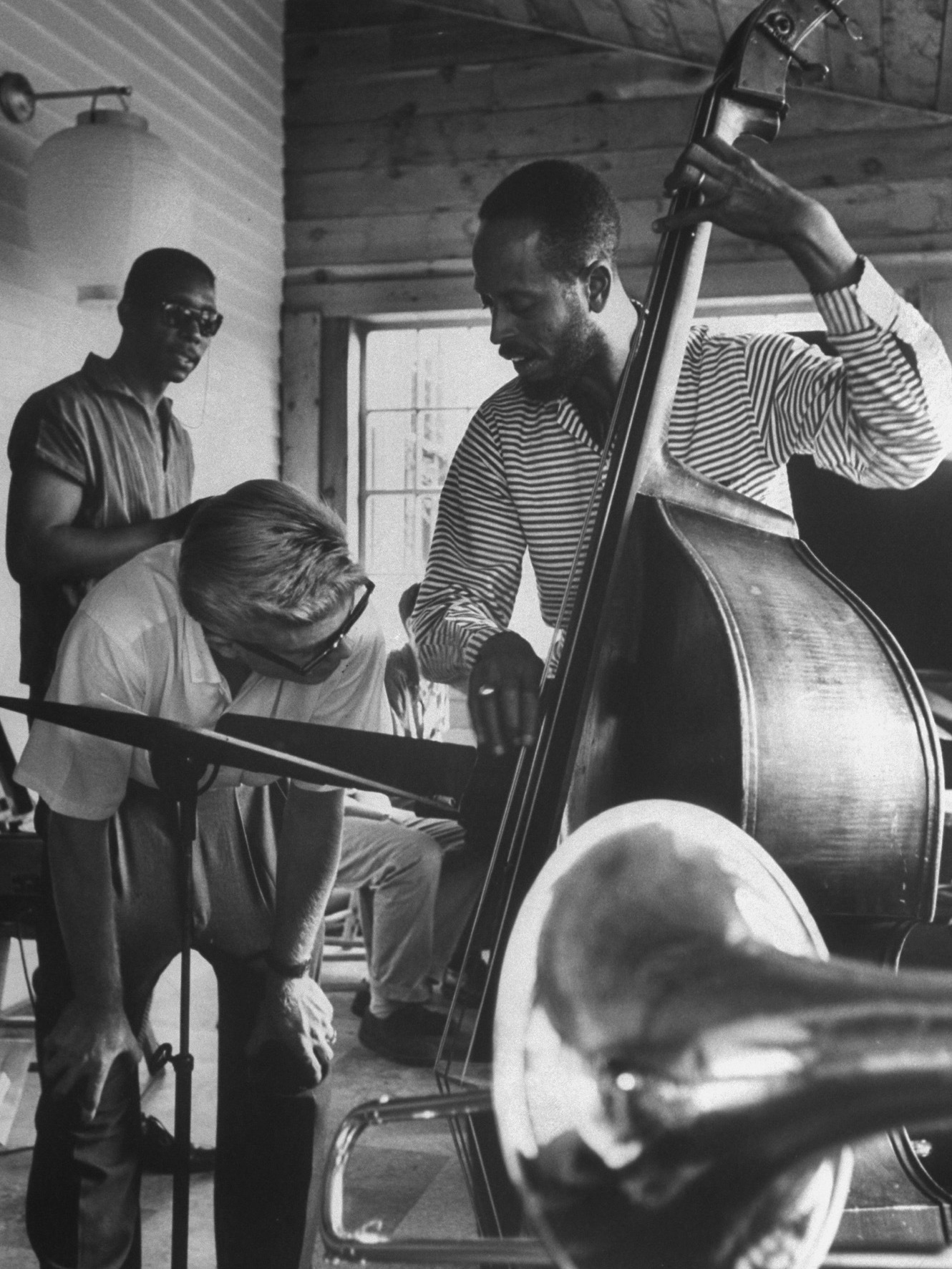 Bassist Percy Heath demonstrates a technique to a student at the summer jazz workshop in Lenox, Mass. in 1959.

One year ago, when I began graduate study in ethnomusicology at UCLA, I found myself undergoing what has become a familiar ritual. As I played my trombone in a near-empty classroom accompanied by a play-a-long recording, it occurred to me that I was in the midst of my sixth college big band audition. A professor — in this special case, guitar legend Kenny Burrell — led the proceedings. When he engulfed my hand in his massive grip, I learned that I was in.

Having grown up in the age of the "jazz-education industrial complex," as Nate Chinen and others have called it, educational institutions such as high schools, summer camps and universities have provided the setting for much of my jazz experience. As I continue down the rabbit hole of jazz academia, I have come to appreciate some of the quirks and contradictions of these strange organizations. They've allowed me to wear many hats besides "big band trombonist": history student, theory teacher, radio DJ, journalist, blogger, advocate, critic and diehard music fan.

But even before these institutions became the primary means of exposure and training for aspiring jazz students, successful musicians had navigated between academic, commercial and social institutions in order to study their music — and to shared that study with others. "The overlap between professional musicians and people who teach and people who study is larger than people think," says David Ake, director of the School of the Arts at the University of Nevada, Reno, and author of the recent book Jazz Matters. "Individuals belong to multiple groups. They interact, much more than history books like to recognize."

The story of "jazz ed" isn't just one of institutional complexes, but of dedicated improvisers finding their ways to them. "The history of jazz and the history of jazz education are the same thing," says Ken Prouty, author of the recent book Knowing Jazz. "'Jazz Education' has been around as long as one jazz musician taught something to another one." Ake and Prouty, music scholars originally trained as jazz musicians, are dedicating much of their research to historicizing jazz education, yet another sign of the phenomenon's complex past.

Louis Armstrong wouldn't be a household name were it not for the brass band at the New Orleans Colored Waifs Home for Boys, where director Peter Davis lent him his first cornet and appointed him student leader. Since then, many storied school band programs have inspired hundreds of jazz musicians. For example, Detroit's Cass Technical High School counts my professor Kenny Burrell as well as pianist Geri Allen, bassist Ron Carter, trombonist Frank Rosolino, rock star Jack White and many others as notable musical alumni.

Of course, the most ambitious jazz musicians have always been dedicated lifelong students, taking their education outside of their school band programs. Louis Armstrong, for example, was known as an ardent follower of not only his mentor Joe "King" Oliver, but also of John Philip Sousa's star cornet soloist Herbert L. Clarke and Italian opera virtuoso Enrico Caruso. Oral history interviews with early jazz musicians suggest that clarinet pedagogue Lorenzo Tio, Sr. was an important mentor to many of them, as Chicago-based trombonist Jaroslav "Jerry" Chimera, another Sousa alumnus, was for many jazz trombonists in the 1920s.

As the improvised language of jazz developed, musicians learned from one another, too. Coleman Hawkins described late-night hangs at his Harlem apartment where trombonists Jack Teagarden and Jimmy Harrison would be up "all night ... both jivin' each other, one of them trying to figure out what he lacked that he could get from the other, and the other one doing the same thing." Of course, this is still true today: Whether in school or not, young jazz musicians still learn much of what they know from playing music with their peers and mentors.

But by the 1930s, some of these musicians began sharing their knowledge with a paying public. Pianist Teddy Wilson pioneered correspondence courses to instruct eager students in developing improvisational skills; the Teddy Wilson School for Pianists came complete with instructional manuals and recordings available for a fee. Although Wilson's course was short-lived, he was not the only New York pianist to establish himself as an influential pedagogue. When Mary Lou Williams moved to New York in the mid-1940s, she quickly established herself as a teacher and mentor to another generation of budding jazz stars.

Ukrainian immigrant composer Joseph Schillinger set up another influential correspondence program around the same time, which included George Gershwin, Glenn Miller, Tommy Dorsey and Henry Cowell among its students. Schillinger's method later inspired one of his pupils, Lawrence Berk, to found Schillinger House in 1945, which changed its name to the Berklee School of Music nine years later.

Berklee, of course, has become one of the institutional powerhouses behind the rapid growth of jazz education in recent decades, training thousands of musicians in various musical styles (including my high school trombone teacher, Ben Medler). Around that same time, in 1946, Texas State University (now the University of North Texas), started the country's first degree program in Dance Band Arranging and founded the now-famous One O'Clock Lab Band. Fueled by interest among G.I. Bill-funded World War II veterans, these programs quickly gained steam, laying the groundwork for lasting institutions as well as training a generation of talented players.

The Lenox School of Jazz

Too often, the story of jazz education starts here, rather than pointing it out as a waypoint along a much longer continuum of jazz musicians sharing knowledge with one another. Take, for example, the historian Marshall Stearns.

Stearns is an excellent example of someone who took on many roles in the name of jazz. In his "day gig" as a professor of English, he began teaching some of the first jazz history courses at New York University, Hunter College and the New School for Social Research in the 1950s. A fervent record collector, Stearns used his massive assemblage of jazz memorabilia to found the largest archive of jazz-related material in the world, the Institute of Jazz Studies, now housed at Rutgers University-Newark. He also served as a musical consultant for the U.S. State Department jazz tours during the 1950s, and wrote The Story of Jazz, setting the foundation for a jazz history narrative that has remained largely unchanged ever since.

Perhaps his most important achievement, though, was the establishment of the Lenox School of Jazz. During the summers of 1957-1960, Stearns established not so much a school as an annual summertime meeting of the minds in the Berkshire Mountains of Western Massachusettes. There, top-flight musicians such as Jimmy Giuffre (a North Texas alumnus), J.J. Johnson, John Lewis, Bill Russo and George Russell gave lectures and mentored aspiring young students. The student group was nothing to sneeze at, either: Ornette Coleman, David Baker, and Jamey Aebersold (pioneer of the "play-a-long" recordings for students) were some of the young upstarts who went on to make names for themselves in the jazz world. As Lewis told Metronome magazine in 1957, "No one is attending the school to be tested. Even if they couldn't play at all, they could gain something from the imaginative men who are doing the teaching. ... We are trying to stimulate their imaginations."

Although it only lasted for three summers, the Lenox School made an important mark on jazz pedagogy. This was where Stearns's history lectures found an audience for The Story of Jazz, and George Russell first began teaching his Lydian Chromatic Concept of Tonal Organization, often hailed as the first work of jazz theory. "It's remarkable to me that you have these two guys — George Russell and Marshall Stearns — who have laid out how jazz would be taught," Prouty says. "And neither were affiliated with an academic institution [at that time]."

Even though universities largely had yet to welcome jazz within their walls, these individual men and women had their own reasons for pursuing the stability of formal education. Whether seeking validation, prestige, collaborators or additional financial support for their work, all of them had to look for creative solutions. When their efforts finally began to pique the interest of American academics, a whole new set of strategies would be required.

In part two of this history, I will trace how academic institutions' embrace of jazz has affected how it is played and heard today. But even though today's reality is strongly mediated by those institutions, its history flows from past generations' passionate improvisations off the bandstand. "The knowledge that we share isn't just for the nascent musicians — it's for the whole university, the whole community," Ake says. "You don't know what the ends are going to be, but you throw it out there and see what gets picked up." The early educators who passed on their knowledge may not have known what would be picked up, but their devotion to sharing what they heard made the idea of institutional jazz education possible.