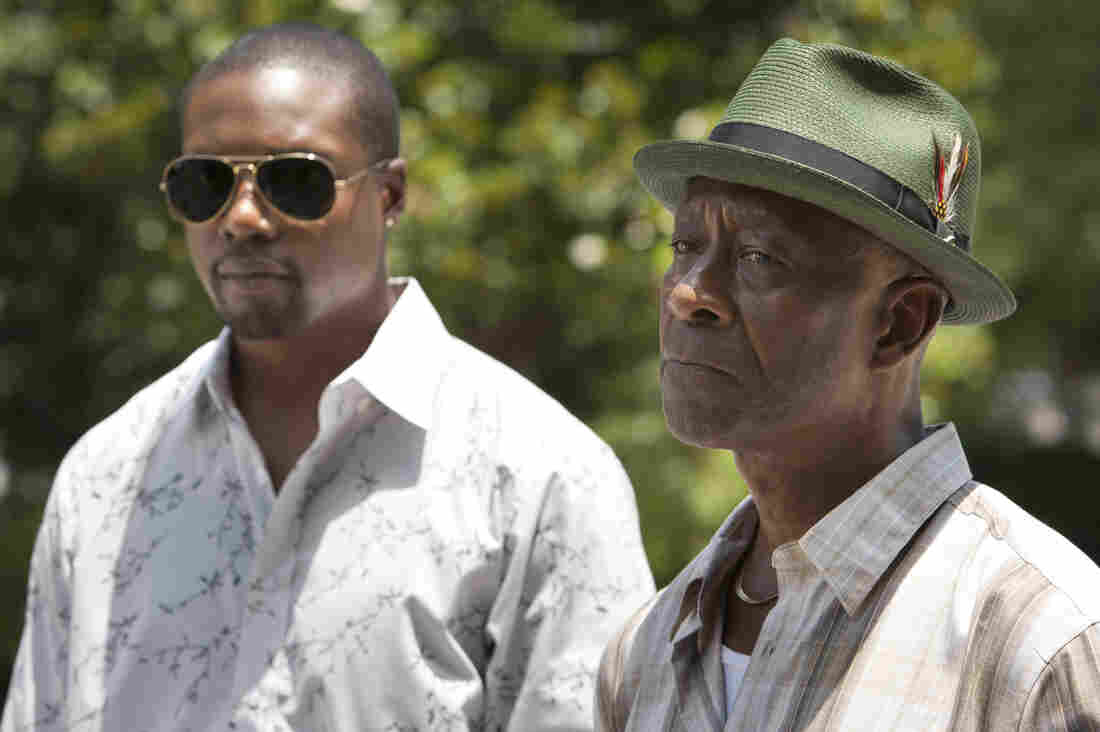 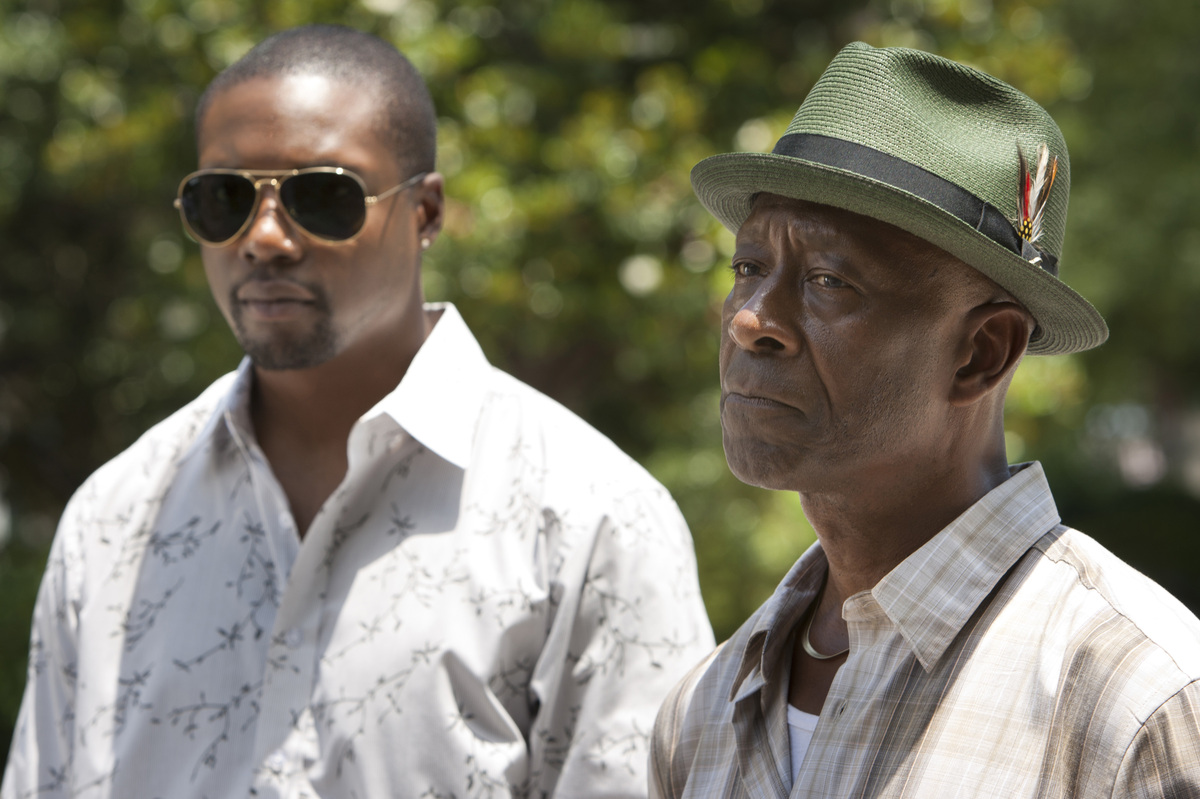 At the end of Treme's season three, with only an abbreviated season four to come, we find many characters walking away from opportunities. Spoiler alert for what follows.

Lt. Colson leaves his job with an emphatic physical statement. The Lambreaux family walks away from the national jazz center project in Congo Square. Janette tries to leave her own restaurant. Antoine seems to be accepting that his calling is more in teaching than performing. Davis calls it quits on his music career. Annie is on the verge of quitting on Davis. Everett leaves town, his story done but with lasting change unresolved. Even LaDonna, among the most willfully determined characters in the show, isn't prepared to file a civil suit to follow up on the mistrial of her rapist.

To help recap the soundtrack of the action, here once again is WBGO's Josh Jackson.

Patrick Jarenwattananon: Davis "retires" from the music business — he'll be back, I'm sure — with his song "I Quit," courtesy of some "full ghetto" exhortations from a special guest (and some viral video assistance). Who is that?

Josh Jackson: That's Cheeky Blakk from the Lower 9th Ward. She's one of the major players in the bounce movement in New Orleans, along with folks like Big Freedia, Sissy Nobby and Katey Red. Cheeky has been delivering for decades, making her one of the legends of the scene. She has collaborated with Rebirth Brass Band and Galactic. Cheeky is renowned for her purple rhymes in songs about twerking and other carnal activities. She recently described herself as a "baby Millie Jackson." If you like your lyrics raw, that's how she serves it.

PJ: Kermit Ruffins gives Davis a gig, as we learn, to help cheer him up. Of course, it ends up being at a Bar Mitzvah in the suburb of Metairie — and the guest of honor winds up outclassing Davis as a pianist in the New Orleans standard "Tipitina." What else did we hear at that party?

Kermit Ruffins (playing himself) performs at a Bar Mitzvah.

JJ: We heard Kermit and the band (Derrick Freeman on drums and Kevin Morris on bass) put an island spin on "Holy Cow," a classic Allen Toussaint composition for the singer Lee Dorsey. Then Kermit revisits Chris Kenner's "Sick and Tired," a song that Kenner recorded for Imperial Records. Fats Domino later brought it to a wider audience.

PJ: Before that scene, we saw Antoine show up to a gig at the Spotted Cat. I recognized the trumpeter as Shamarr Allen — there sure are a lot of singing trumpeters in New Orleans.

JJ: Louis Armstrong is still the standard for greatness, and Shamarr invokes that lineage as a starting point. "Meet Me on Frenchmen Street" is one of Allen's more traditional songs. He's a very versatile musician who puts his talent wherever he can stylistically. That includes entertainment, production and playing some serious trumpet as the situation warrants. Also, props to a guy who puts his digits on blast. His recent recording, a rock-oriented effort, is 504-799-8147.

PJ: We later learned Antoine was recruiting Shamarr for the Gigi's/LaDonna benefit concert at the Blue Nile. Let's run down what we saw there, with at least one Neville, Trombone Shorty and Big Sam, Jill Sobule, Tom McDermott, John Boutte, a Little Freddie King cameo, the reunion of Antoine Batiste's Soul Apostles and lots of trombone players.

JJ: The show at the Blue Nile starts with "What You Want From Me," featuring the core funk unit of drummer Johnny Vidacovich, bassist George Porter, guitarist June Yamagishi and Ivan Neville on keys. Later, we see the trombone-driven band Bonerama playing "And I Know," from the Bringing It Home record. Then we get an extra dosage of trombone with Trombone Shorty and Big Sam Williams joining the proceedings, as Jill Sobule sings one of her early singles, "When My Ship Comes In."

Antoine and the Soul Apostles reprise their lowdown take on "Can I Change My Mind" from an earlier season. LaDonna chats it up with bluesman Little Freddie King while he's hanging at the bar. Tom McDermott gets into the action with "Lizinha," a Brazilian number he recorded on his Choro do Norte album. And with McDermott behind him, John Boutte takes Little Willie John's "Let Them Talk" for a spin.

PJ: Annie's saga finds her moving on up to another league, with an album release and a New York show. But we also see her return to Jazz Fest for a gig. By now, that band has come up with a repertoire that regular viewers will recognize.

JJ: The Bayou Cadillacs play the Red Stick Ramblers' "Katrina" on the Fais Do Do stage at the New Orleans Jazz and Heritage Festival. They are doing the hard work of building their audience one gig at a time.

PJ: Finally, what was playing in this episode that you heard? Other than the closing montage set to "Tipitina," of course.

JJ: While Davis McAlary visits the best record store in town, Louisiana Music Factory, there are a number of tunes — notably singer Clint Maedgen and the New Orleans Bingo Show's "Looking for That Lucky 5." Saxophonist Lance Ellis gets his smooth tone into "Voodoo Love," and Holley Bendtsen, founder of the Pfister Sisters, purrs in "Laissez Faire" with pianist Amasa Miller.

David Torkanowsky's "Blues for Charlie B" plays briefly in Lambreaux's earbuds before the montage. That's a song in honor of Charlie Bering, a wonderful jazz impresario who ran a club called Lu and Charlie's and booked great modern jazz around New Orleans for decades, including Jazz Fest. There have been some attempts to augment the presence of modern jazz since his death in 1998, but I'm not sure anyone has been able to fill the void left after his departure.