Accessibility links
When Your Grandfather Is The Greatest Living Jazz Drummer : A Blog Supreme The prodigious drummer Marcus Gilmore, 25, has been playing with the biggest names in jazz since he was a teenager. He's coming off a career year that saw him named the top rising star among jazz critics. It helps that his grandfather is Roy Haynes, one of the great pioneers of the drum kit.

When Your Grandfather Is The Greatest Living Jazz Drummer

When Your Grandfather Is The Greatest Living Jazz Drummer 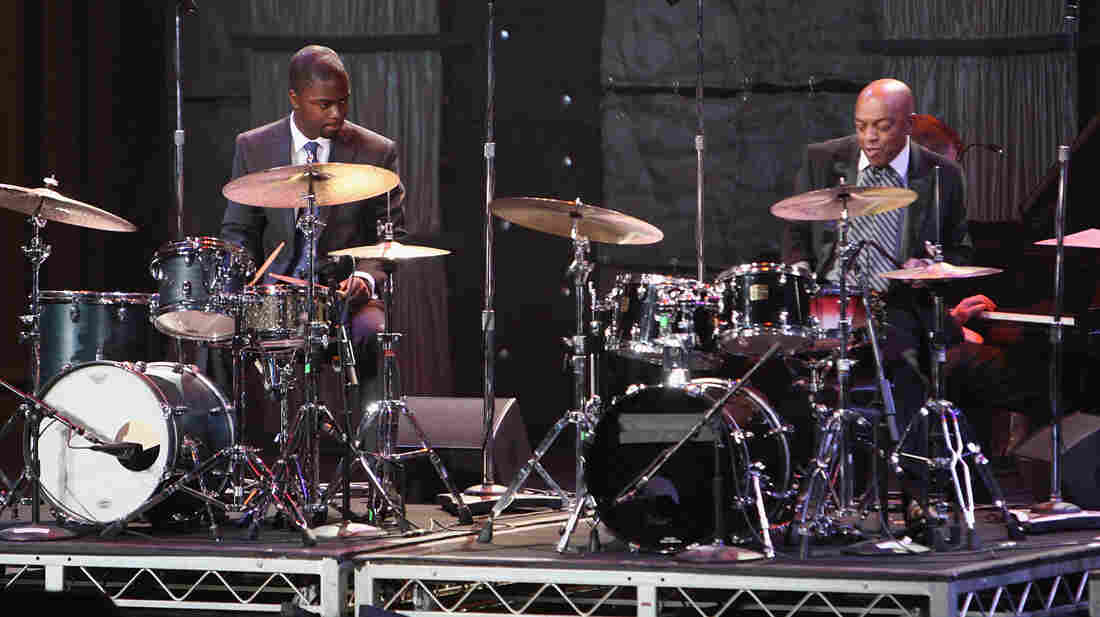 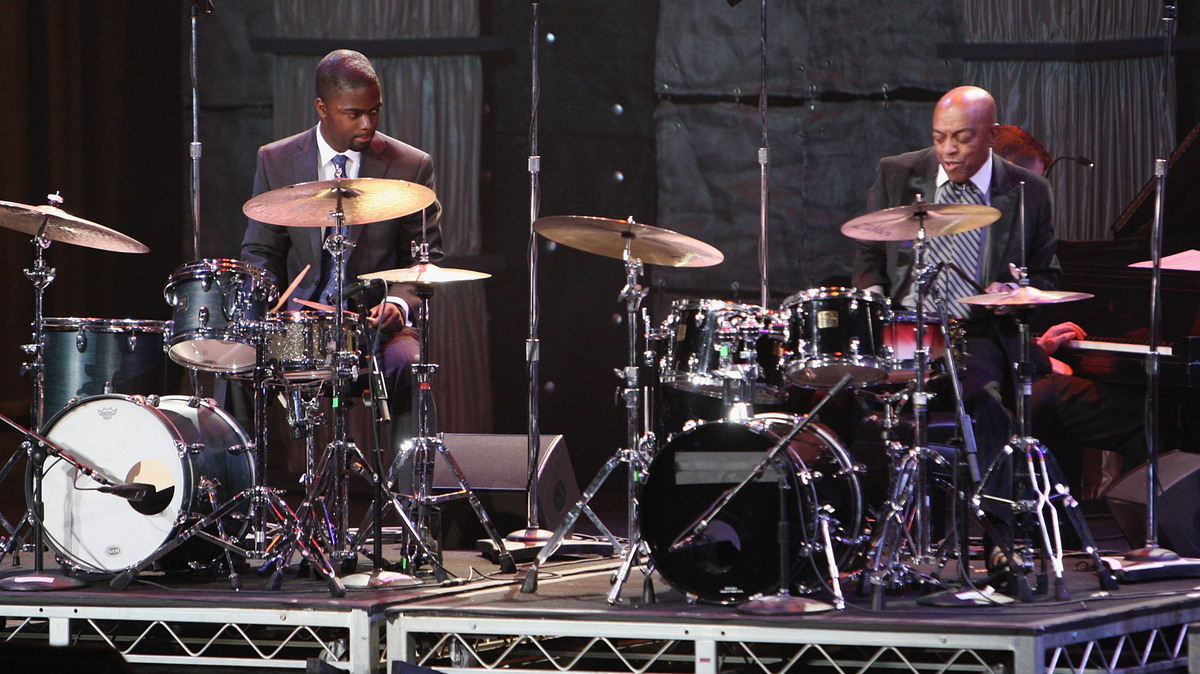 The drummer Marcus Gilmore is coming off a major year in his career. In 2012, DownBeat magazine named him its top Rising Star Drummer in its long-running Critics Poll; pianist Vijay Iyer's trio, of which Gilmore is a member, also took the Jazz Album and Jazz Group of the Year categories. Over the last decade, he's worked with an esteemed roll call of performers including Cassandra Wilson, Nicholas Payton, Kenny Garrett and the legendary pianist Chick Corea, with whom he just recorded a new album. He's currently in the studio working on a solo project.

It's no secret that he's also the grandson of iconic drummer Roy Haynes, but it's not something Gilmore wears on his sleeve — at least not in a typical sense. While he says he doesn't feel any pressure to follow in such enormous footsteps, he does intently advocate for his grandfather's rightful legacy.

"What people don't realize, when they talk about people like Roy Haynes as one of the great jazz drummers, is that really he is one of the original drummers creating the language for everybody," Gilmore told me in a backstage interview, in between sets with Iyer at the Jazz Standard in New York. "But people don't think about it like that; they think of him as a jazz great. But the thing is really the drum — the trap set — is pretty new, maybe like 100 years. If you're playing that much drums in 1945, that means you're one of the pioneers of the instrument."

In addition to hundreds of recording and performance credits — including those with Charlie Parker, Bud Powell, Sarah Vaughan, Thelonious Monk and John Coltrane — Roy Haynes is also one of the foremost architects of contemporary jazz practice. Arguably, he is the preeminent living jazz musician.

Gilmore's relationship with this 87-year-old legend, his grandfather, is a story of close family ties, an acute sense of history and profound musical irony.

Gilmore was raised in Hollis, Queens, a New York City neighborhood renowned as a settling place of jazz musicians for decades. His musical pedigree runs deep on both sides of his family. His father, a saxophonist, and his mother, a singer, had a gospel group in the '70s. His uncle Craig Haynes, Roy Haynes' son and also a drummer, lived upstairs. Another uncle Graham Haynes, also son to Roy, is a cornetist, composer and one of the founding members of the M-Base Collective.

Music was inescapable, but Gilmore came to the drums on his own terms. In fact, he had to convince his grandfather that percussion was his passion. "I knew I wanted to be a drummer as a profession at 7 years old," he says. "I knew at that point, but I don't know if everybody else knew I was as serious as I was." It would be three more years until Gilmore received his first drum set. On his 10th birthday, his grandfather gave him the one he'd been using.

Both Haynes and Gilmore started their professional careers as teenagers. But while Gilmore attended LaGuardia High School (New York City's arts magnet), The Juilliard School's Music Advancement Program and The Manhattan School of Music, Haynes is primarily self-taught. "He would say, 'Back in my day it's what you call [being] a natural,'" Gilmore says. "I remember it was so simple, the way he would explain things. 'Just start here, and then take it wherever you want to take it ... that sounds about right,' and that was that.

"It was really good for my development," Gilmore adds. "It wasn't that his views were so definitive. He allowed me to find my voice, the way he gave me the information. He was never dictating how things should turn out. He was giving me so much information without saying much at all. Older, wiser people usually do."

While Haynes wasn't giving his grandson formal lessons, he was grooming him for the inevitable. Gilmore was sitting in with his grandfather while still a junior in high school. In 2002, Haynes' Fountain of Youth band was closing out a jam-packed week at the club Birdland, which would become part of a live album. After the set, Haynes introduced the audience to Gilmore, and summoned him on stage to take a solo.

Around the same time, Haynes started watering the seeds of another pivotal relationship between Gilmore and one of Haynes' longtime friends and colleagues: Chick Corea. The pianist and Haynes have been playing together since the 1960s. "I actually got to play with [Corea] during a Blue Note run [celebrating his birthday]," Gilmore says. "You know, I would always tell Gail, his wife, that we would always play 'Windows' in high school, and she was really happy to hear that. She said, 'Maybe you all can perform for Chick?' and I said that sounded great.

"Then she said, 'Or maybe you can play it with Chick,' and I said, 'Um... that would be great. Yeah, let's go with that one!' And so he let me sit in and I got to play with him and I got to play with [Christian] McBride and Joshua [Redman], and it was amazing. I was really nervous. I do remember after we played it, my grandfather was like, 'You didn't give him a solo!' Then we played 'Straight No Chaser,' and Chick let me solo the whole song." 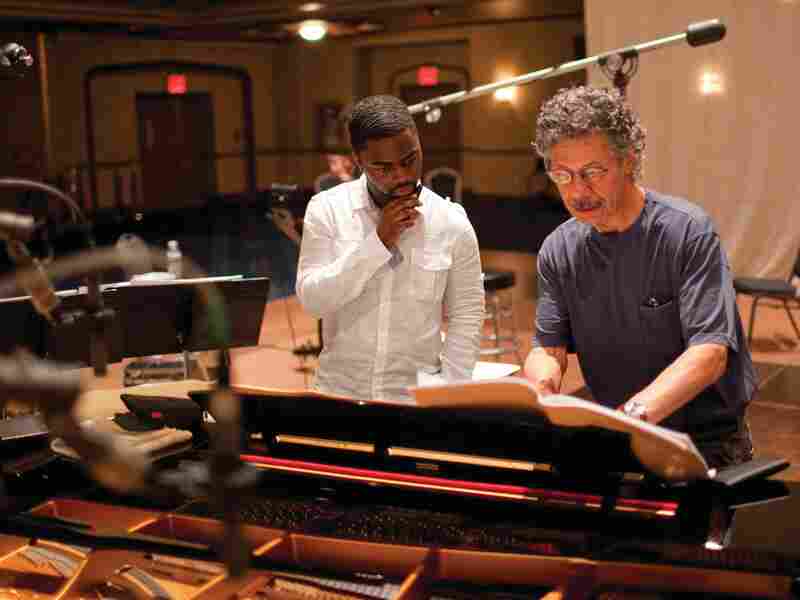 Chick Corea discusses a passage with Marcus Gilmore during the recording sessions for the two-disc set The Continents. Corea recently recorded another album featuring Gilmore. John Rogers/Courtesy of the artist hide caption 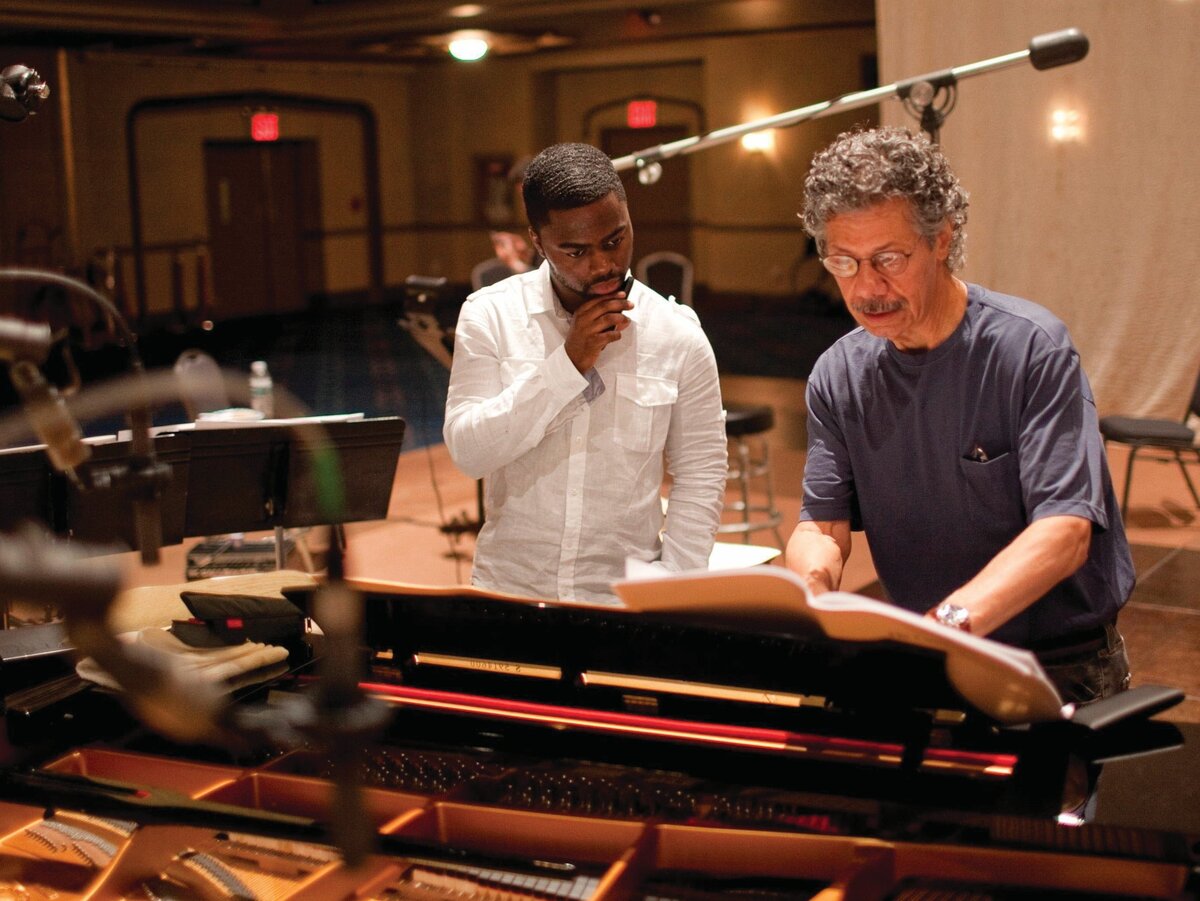 Chick Corea discusses a passage with Marcus Gilmore during the recording sessions for the two-disc set The Continents. Corea recently recorded another album featuring Gilmore.

This relationship would blossom over the next few years. Gilmore was quickly becoming an in-demand drummer, playing with stars like Ravi Coltrane, Clark Terry and Nicholas Payton. Corea eventually asked Gilmore to go on tour with him. "There's no pressure," Gilmore says. "Definitely no pressure from my grandfather, not from myself and not from my family or Chick. Maybe some people in the audience, but I don't really tap into that too much, so it's cool. But there is some irony there. I think it's beautiful, and I know Chick does, too, and I know my grandfather does for sure; he always talks about that."

In 1968, Corea, Haynes and bassist Miroslav Vitous recorded the album Now He Sings, Now He Sobs. Now seen as a landmark record in modern jazz, Now He Sings was one of the first recordings to feature a flat ride cymbal — which Haynes played, of course. Created by the Paiste cymbal company in the 1960s, the flat ride has no bell, giving it a tighter, brighter sound.

Gilmore recently recorded with Corea using that very same ride cymbal. "I mean, of course, for other reasons that record was groundbreaking, but that was one of the things; it was like, 'What's this cymbal [Haynes is] using?'" Gilmore says. "Of course, it's the way he's playing — obviously that's what it comes down to — but the cymbal was pretty different [for that era], so throughout the years, Chick would borrow it from time to time, because there weren't that many at the time. So eventually, in the late '90s, my grandfather gave it to him. Chick broke it out on the first tour I did with him, so I played it on that tour — and on this last record, I played it, as well."

Haynes has been a part of several seminal trio recordings, and led his own dynamic trio in the early 2000s, featuring Danilo Perez and John Patitucci. Similarly, Gilmore is making his mark as more than a capable sideman: His musical identity can be integral to the distinctiveness of a band.

Such is the case of the Vijay Iyer Trio, one of the most creative ensembles of the last decade. Gilmore and Iyer have been playing together for just that long, meeting through mutual mentor Steve Coleman. (Gilmore's uncle Graham Haynes, who helped establish M-Base philosophies with Coleman, was responsible for that connection.) Coleman's tutelage proved influential for both musicians, especially in cultivating their interests in non-Western musical traditions. "Most people tend to think of rhythm as secondary to melody or harmony," Gilmore says. "I feel that our work with Steve has furthered our understanding that they are all at the very least paramount in developing one's musical ability. However, it's safe to say that the most recent innovations in music have their foundation in rhythm." 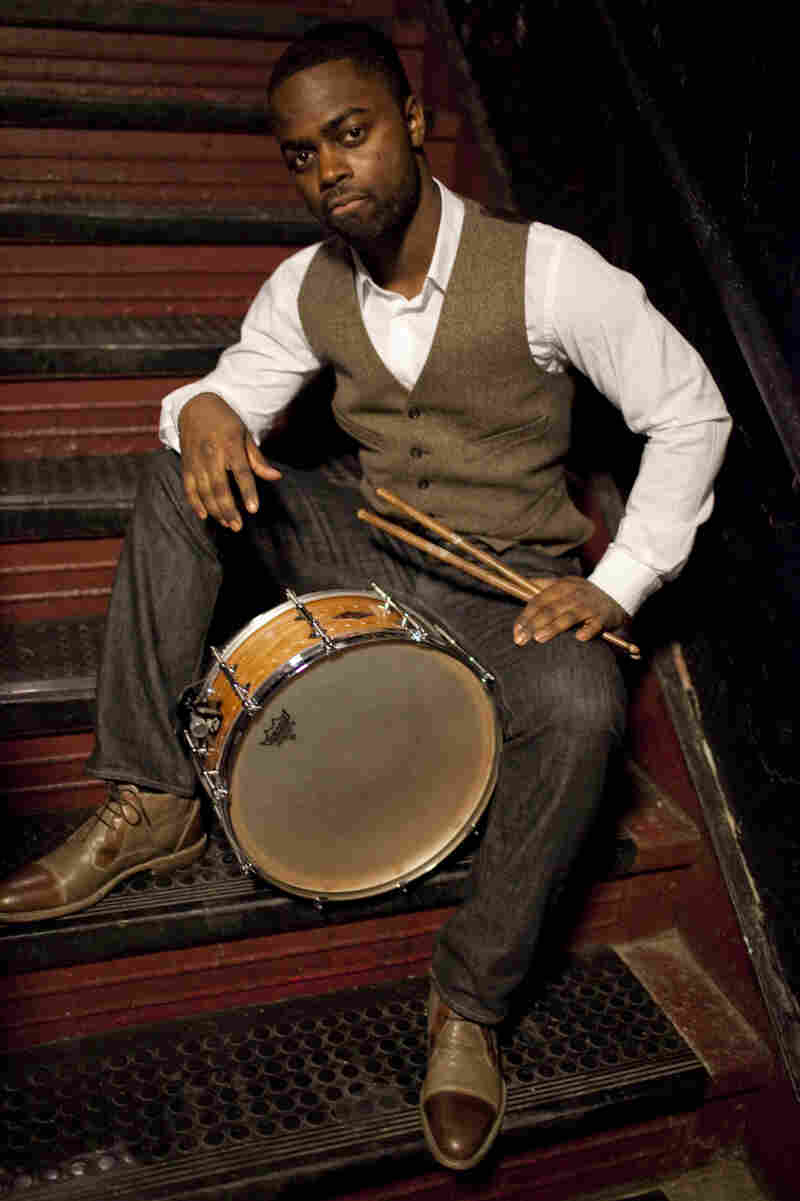 Marcus Gilmore at the Village Vanguard. John Rogers/Courtesy of the artist hide caption

The emergence of hip-hop helps to illustrate Gilmore's point. There's a strong hip-hop influence in Iyer's trio, and between the pianist and his drummer, the two have collaborated with artists like Das Racist, Dead Prez and Flying Lotus. Yet this, too, is just part of a myriad of influences that Gilmore readily admits is ever-evolving and expanding. "One thing I can say is that I listen to a lot of music," Gilmore says. "I spend a lot of time listening. I always try to approach things with an open mind, and I actually thrive on being involved in contrasting situations. It actually helps everything when I'm involved in expressing different parts of myself. I always try to take so much in, and I also have so much in me that I have to express. So I just feel like, for me, it's the most natural thing to be playing with so many different projects, because I have so much to say, but I think that's a result of taking in so much information."

This may be the most profound parallel yet between Haynes and his grandson. Haynes' 60-year career not only encompasses many eras of jazz, but his dexterity in both rhythm and style has taken him across the musical map and beyond genre classification.

"His open-mindedness is definitely one of the reasons he's remained so fresh," Gilmore says. "Another reason is that it was just something he was born with, because in some ways, his playing hasn't changed that much. It's evolved, but in some ways he was playing all that same bad s-- in the '40s. I don't know where he got it from. To have him is a treasure. A treasure to the family, but also as a national treasure, too, actually.

"It's really just a huge blessing," he adds. "I mean, you know, it's all I've ever known, but at the same time it's still amazing."

As Gilmore and I wrapped up our conversation, he paused before preparing for the next set. "My mother was going to try to bring [Haynes] down to the club at some point, but I know he has to go on a cruise this weekend. So he probably won't make it out, especially with the bad weather. But my mom called me and said, 'Grandpa said he might not make it, but he said, "If Marcus is there, I'm there."'"