Accessibility links
An Improviser Learns The Art Of Patience : A Blog Supreme For saxophonist Dayna Stephens, serenity has been a key to dealing with a rare kidney disease. It's filtered into his playing and composing, which is on the upswing despite health challenges that drain hours from his days and thousands of dollars a week from his limited budget.

Facing Illness, An Improviser Learns The Art Of Patience

Facing Illness, An Improviser Learns The Art Of Patience 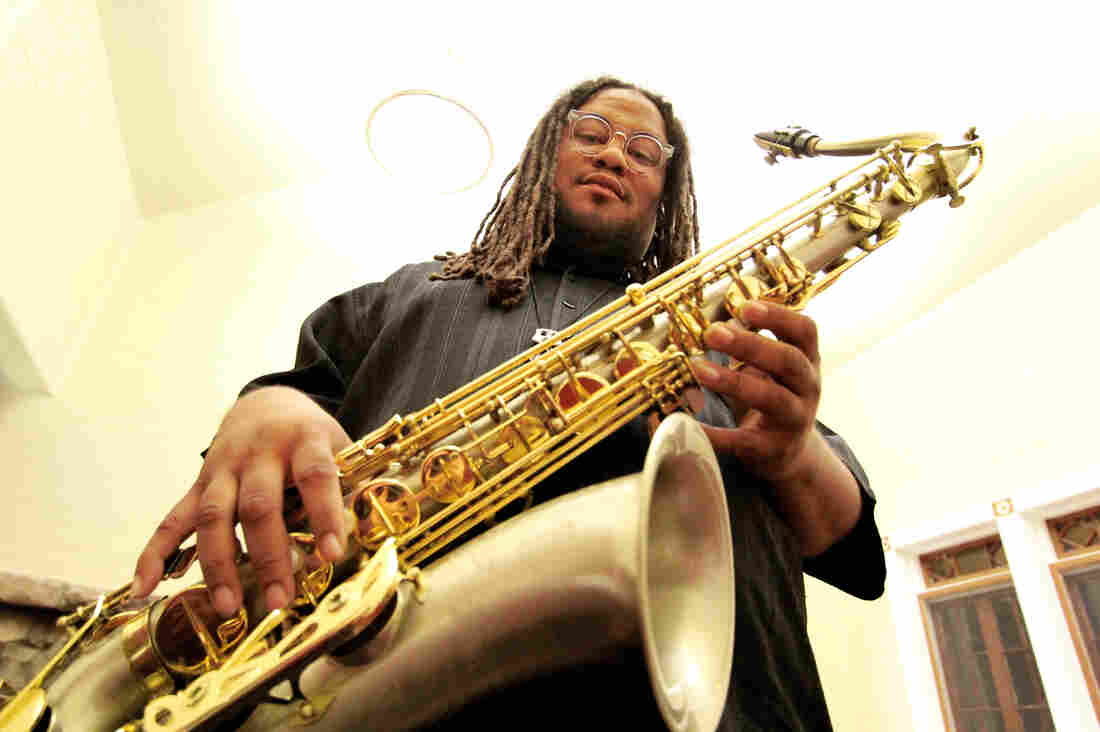 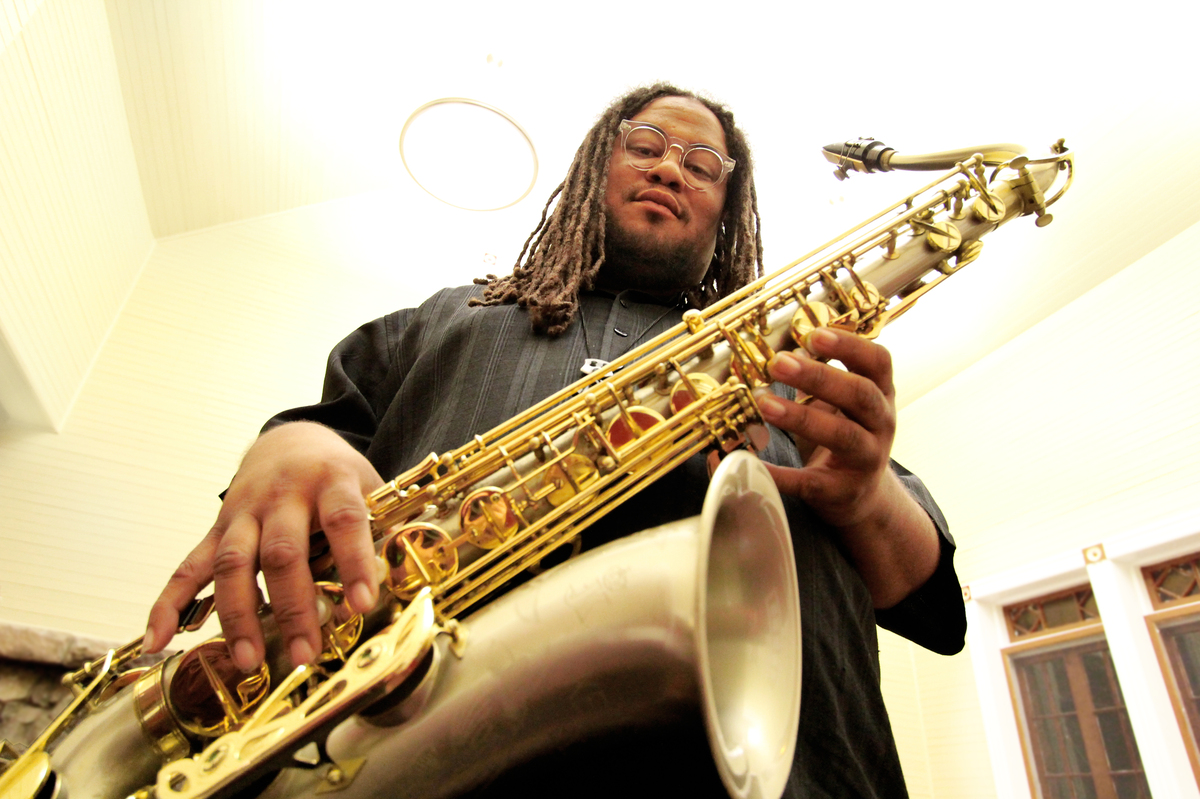 Such is the case with "Full Circle," an evocative mid-tempo song from his new album, That Nepenthetic Place. He first envelops a luxurious melody within haunting three-horn harmonies; then, when Stephens' solo emerges atop a pneumatic rubato rhythm, it unfurls with elegant poise. 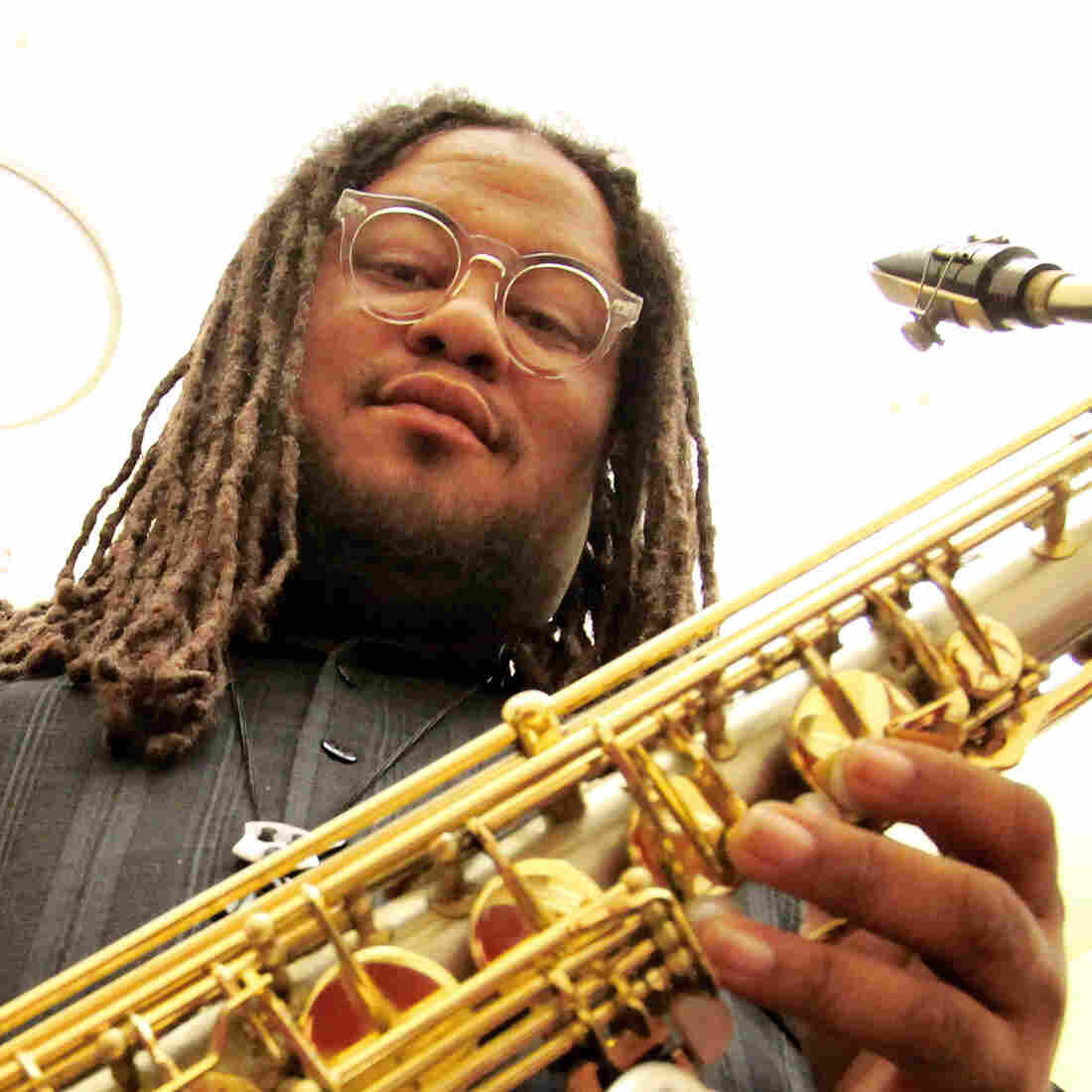 "When I'm playing, I'm really trying to make something new happen. It often happens by playing unintentional notes," Stephens says via Skype from his Paterson, N.J., home on a late May afternoon, hours before he joins pianist Taylor Eigsti at New York's Smalls jazz club for a gig. "I always try to come up with something singable." He says he loves jazz musicians like Miles Davis and pianist Brad Mehldau, who often play in a more languid, pensive manner. "That could be interpreted as being more mature and more patient-sounding," he says.

But Stephens isn't just patient on the bandstand. He's had to amend his approach to playing due to focal segmental glomerulosclerosis, a rare kidney disease; Stephens has been on dialysis since October 2009.

Apart from going to a clinic three times a week for dialysis, as well as receiving other medication, his health challenges affect all aspects of his career, including his physical stamina. A week prior, Stephens performed a trio gig at Smalls with bassist Doug Weiss and drummer Marvin "Boogaloo" Smith.

"In the middle of the second set, I just hit a wall," Stephens says. "The music was still there, but my chops were just gone. Right away, I had to leave a lot more space. That's a distraction, but I still can make music with that limitation. I just go with it."

In conversation, Dayna Stephens maintains a serene demeanor. He's as forthcoming discussing his health challenges as he is describing his music. Right now, he's setting up dates to support both The Nepenthetic Place and another disc, tentatively titled A Journey Adrift, which comes out this fall. In late May, he played the Healdsburg Jazz Festival in northern California; the next day, he performed at Oakland, Calif.'s Paramount Theatre at a "Celebration of the Music of Dave Brubeck" concert for which he'd arranged Brubeck's composition "The Duke" for the Oakland East Bay Symphony. Later this year, he'll embark on two small tours with dates in Montana, Denver, San Francisco, Los Angeles and Edmonton, Alberta.

For self-managed musicians like Stephens, logistics such as travel, lodging and paying band members can be hectic under normal circumstances. With his health concerns, there's another level of careful planning involved that requires, yes, patience. He has to schedule time for out-of-state and overseas clinic appointments for dialysis.

"This time, we're finally today just getting it set up for next week," he says. "Usually, it's done a few weeks ahead of time. But it was very difficult to find clinics that have openings for the times that I need to go. Luckily, there are social workers at the dialysis clinic that help me."

For two and half years, Stephens self-administered dialysis with a portable bag, which filters fluids through the abdomen. That allowed him to do it at home, as well as on the road. But there was a major drawback.

"The bags were saturated with a lot more dextrose than I realized," he says. "I was gaining so much weight that I was kicked off the kidney transplant list." Since December 2012, Stephen has switched back to the method which requires him to go to a clinic, a process that sometimes takes more than five hours per visit.

At first, Stephens would either watch television or talk on the phone during his clinic visits. Now, he takes his computer and keyboard — a move that's been beneficial to his productivity. "[Dialysis] makes talent and time much more on the front burner," Stephens says. "In the beginning, it was more of a depressing thing. But as I've gotten used to it, it's made me happier than I was before I started it. In a way, I'm getting a lot more done now than before, when I actually had a lot more time."

"The dialysis schedule is really hard to manage, but he makes it work," says pianist Taylor Eigsti, who also appears on Stephens' new album. "I think he's one of those rare people in life that can use their own misfortune to create even more perspective and depth in the music, and he doesn't let anything get in the way of his musical growth and journey."

Though he was born in Brooklyn, Stephens grew up in California's San Francisco Bay Area. He cites his grandfather Elbert Bullock, a one-time professional saxophonist in the 1950s, as one of his first musical lodestars. It was his grandfather's own sax that Stephens once tried to mimic. "When I first started playing saxophone, I encouraged [Bullock] to take out his horn for the first time in a while," Stephens says. "The first thing I heard was this big, warm vibrato. That warmth is something that I've been chasing ever since. I can't get the same sound. But you have to surrender to what you can do after a certain point."

Stephens began his formal music studies in the Bay Area as a teenager, when he made his way to Boston's Berklee College of Music on a full scholarship. Then he attended the master's degree program at the Thelonious Monk Institute of Jazz, where he studied with such titans as Terence Blanchard, Wayne Shorter, Herbie Hancock and Kenny Barron, some of whom he's joined on the road.

Since releasing his 2007 debut, The Timeless Now, Stephens has also been establishing himself as a composer. That disc featured all originals. His compositions, or those by contemporaries, take the lion's share of his other records. He even wrote music for singer Gretchen Parlato's acclaimed 2011 album The Lost and Found.

I can't get the same sound. But you have to surrender to what you can do after a certain point.

Eigsti says he prizes Stephens as one of his favorite composers. "Dayna has a way of using harmonic subtleties to create unpredictable emotions throughout his compositions and arrangements," Eigsti says. "The way he composes is genuine, and he puts his personality into all of his tunes. His beautiful energy as a human being comes through his compositions very vividly and honestly."

Jaleel Shaw, the alto saxophonist on That Nepenthetic Place, describes Stephens' compositional voice as "wide open." "He doesn't commit to one style or any format," Shaw says. "He composes from the heart, and it's always a very fresh experience. He has very crisp rhythmic and harmonic concepts that present a challenge to the musicians. But at the same time, they are songs the listener can go home singing after one listen."

Stephens says he experienced a writing lull when he briefly moved back with his family in California. But in the past few months, he's been composing vigorously. "I have like a year's worth of deadlines," he says. Some of the forthcoming works include writing 12 big-band charts for the Berklee College of Music and some collaborative orchestral works with Eigsti.

With A Little Help

In addition to juggling a burgeoning music career with health challenges, Stephens must contend with the financial burdens of health care. Dialysis alone can reach more than $3,000 a week. Then there's the anti-rejection medication, which costs more than $4,000 a month.

He supplements his income with teaching engagements for the New School of Jazz and Contemporary Music and Stanford University; he also tutors students around the greater New York area. But a career in jazz seldom yields solid financial security. "I'm lucky in one sense, because kidney failure is one of the only things that Medicare covers if you're under 65 or whatever it is," he says. "There's no possible way that I could pay for this myself."

That luck is bittersweet, though. After finishing at Berklee College of Music, he got kicked off his parents' insurance at age 25. He tried to keep up the monthly $500 payments with COBRA — an often-costly program that offers temporary continuing health coverage at group rates — for about a year and half, while living with his grandmother. Once he got kicked off COBRA with his preexisting medical condition, no insurance company would take him. In order to receive health insurance, he had to literally wait until his kidneys failed.

"When it started happening, the doctors were saying, 'If you don't have health insurance, we can force you to have dialysis and literally keep you in the hospital until you figure out how to pay for it,'" Stephens says. "It felt pretty insensitive of the government to even have that as a policy."

In 2009, Stephens got on a waiting list for a kidney transplant, with hopes of receiving one by 2014. A series of benefit concerts arranged by his colleagues has helped with medical costs; in July 2011, a performance at Yoshi's Jazz Club in San Francisco — featuring percussionist John Santos and bassist Marcus Shelby, among others — raised more than $7,000. The Jazz Foundation of America has also set up helpdaynastephens.org for people to donate money.

Stephens says his friends have raised almost $30,000, which he's saving to pay for anti-rejection medications after he receives his kidney transplant. "Just knowing that folks have my back through this inspires me to keep pushing through, and to continue with my music," he says. "It's easy to feel overwhelmed with worry about your mortality, your future and your quality of life when hit with something like this."

When faced with such generosity from his peers, Stephens is often lost for words. "This will sound trite, but saying 'Thank you' is such an understatement," he says. "The amount of gratitude I have for them is overwhelming. I didn't ask for help. But they saw that there was a need and they went for it. I'm forever grateful."

Even though Stephens acknowledges the power of inspiration when sharing his story, he says he fears that his health challenges will draw more attention than his music. "I don't want to get recognition for my music because of it," he says. "'Cheapens' isn't the right word, but they do give my music more attention than maybe it would have had I not had them."

But Stephens acknowledges that it's an integral part of his personal and artistic narrative. "It's hard for it to be separate anymore," he says. "It's who I am, and it's obviously affected my music and how I play. It gives my music more patience."