Accessibility links
The Jazz Documentarian Who Won The Lottery : A Blog Supreme When Brandon Bain started singing in New York jazz clubs, he knew he wanted to capture the scene on video. Against 10,000-to-1 odds, he found the means to do it. His web series Capsulocity now features impromptu performances of top young talent generating a bit of unscripted fun.

The Jazz Documentarian Who Won The Lottery

The Jazz Documentarian Who Won The Lottery 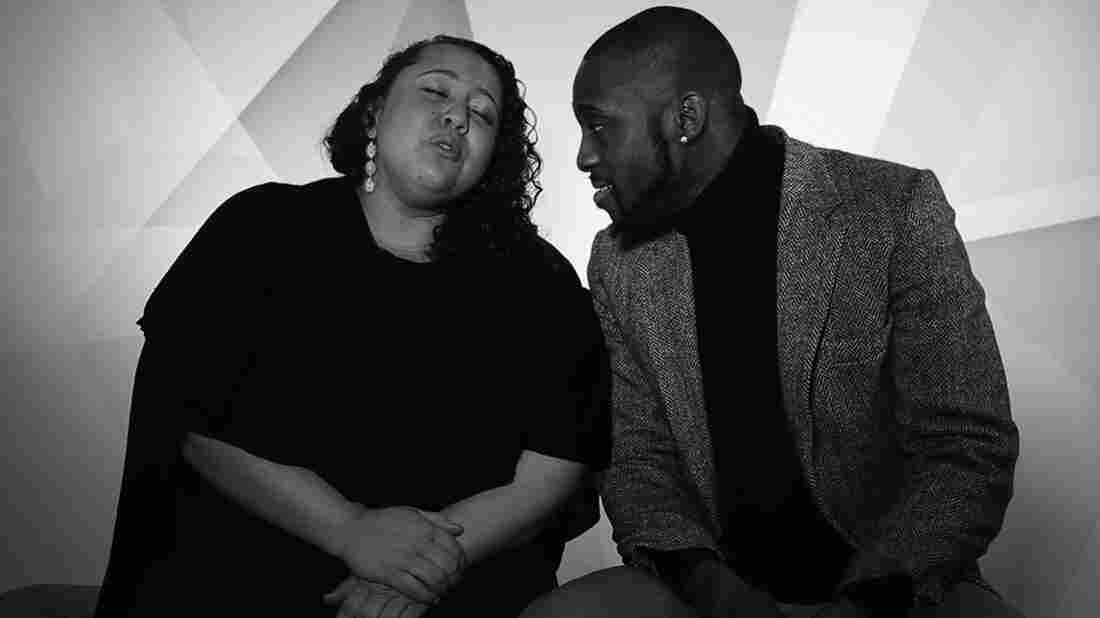 Vocalist Brianna Thomas and Michael Mwenso sang a duet of "Don't Blame Me" for the web series Capsulocity. Courtesy of Capsulocity hide caption 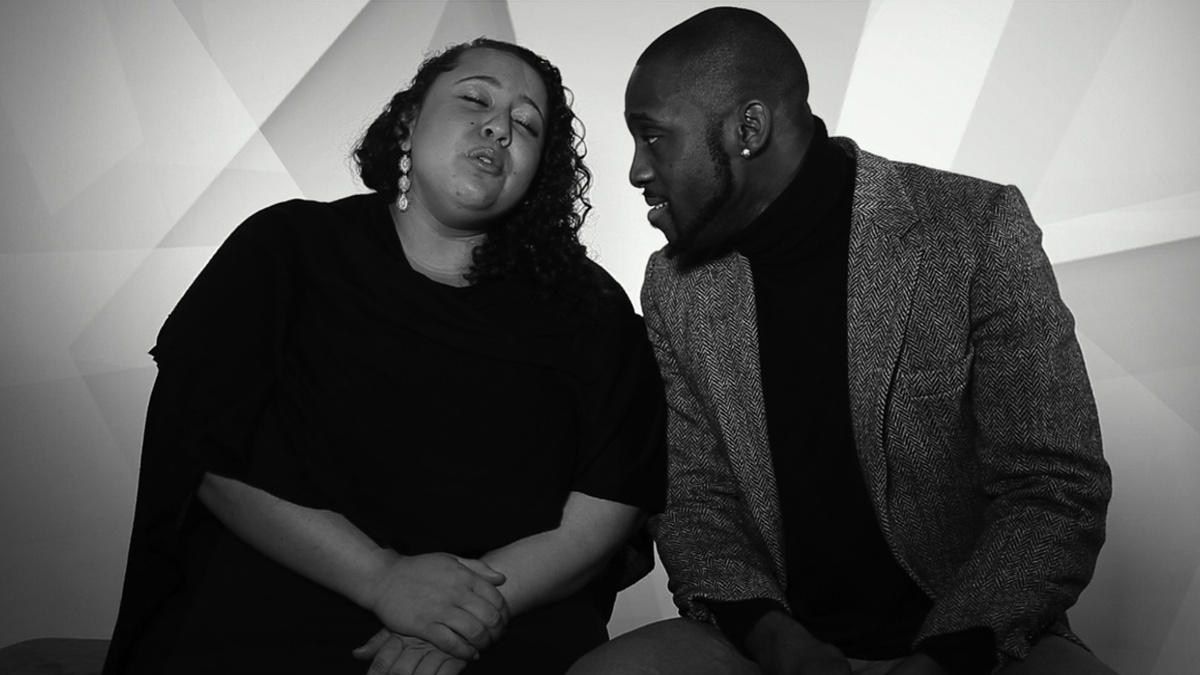 Vocalist Brianna Thomas and Michael Mwenso sang a duet of "Don't Blame Me" for the web series Capsulocity.

Around 2009, Brooklyn native Brandon Bain started shopping for a new video camera. He'd sung in choruses growing up, but had recently started going to open mics and jam sessions to try his hand on stage. To his surprise, he discovered that the city he grew up in housed a ton of young, undersung jazz talent — and he grew anxious to document it.

Bain talked to a film-director friend who recommended a specific model. That choice was seconded by another friend later that week. Of course, Bain didn't quite have the $2,600 to purchase such a camera. Then, suddenly, he did. 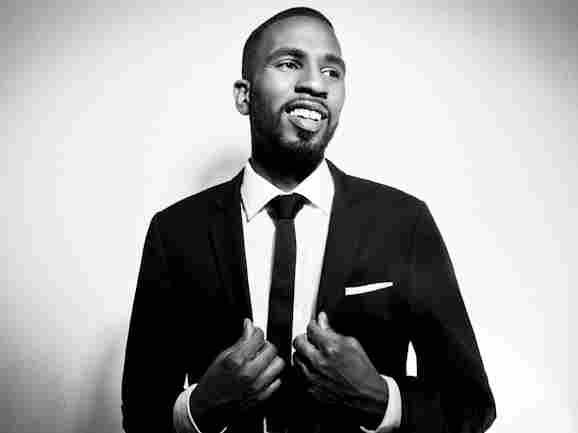 Brandon Bain had little in the way of formal vocal studies or video-editing training when he started his web series. Courtesy of Capsulocity hide caption 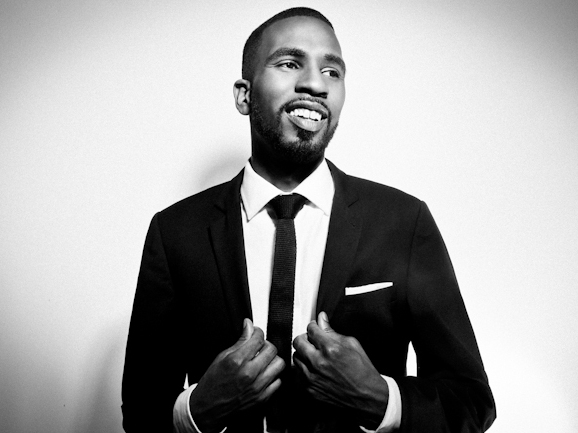 Brandon Bain had little in the way of formal vocal studies or video-editing training when he started his web series.

"That same guy who recommended it to me, the second guy, I asked him for four numbers between 0 and 9," Bain says. "And within a few weeks, that number came. I can't even make that up, but that's what happened: I won exactly $2,600."

The New York Lottery has a game called Win4 where you pick four numbers and hope they're the same as those drawn. There are different ways to multiply your bet, but the bottom line is that if you aim to win $2,500 or more, your odds are 10,000 to 1.

With those odds in his favor, Bain, now 31, launched Capsulocity — at Capsulocity.com, or via a YouTube channel — a series of video "capsule" portraits of young jazz musicians in New York City. He didn't have much of a journalism or multimedia production background (apart from a few college courses), but he managed to sell a few musicians he knew on the idea of an interview and performance vignette.

Pianist Christian Sands was the first artist Bain approached, and the subject of Capsulocity's pilot episode in 2012. Amid an industry-wide debate about young musicians, I stumbled upon that clip and posted it to A Blog Supreme. I put it out of my head until I met Bain this summer on a trip to New York City. When I finally checked in on Capsulocity, it had grown quite a bit. In addition to 17 solo performances — including "name" artists like Jonathan Batiste, ELEW and recent Monk Competition winner Melissa Aldana — there were now a few duo performances. In one, Christian Sands teams up with fellow pianist Kris Bowers to create an unusual prepared-piano take on "Ain't Misbehavin'":

I was particularly taken by these impromptu duets, which Bain has branded "That's Killin'." There's the way bassists Ben Williams and Yasushi Nakamura coax coherent improvisation out of a double-bass duo; the melody and counter-melody trading of trumpeters Jean Caze and Etienne Charles; the chemistry vocalists Charenee Wade and Charles Turner III generate flirting through "Honeysuckle Rose." They all have a certain unscripted magic about them. So I tracked down Bain and gave him a call.

"I modeled that show kind of after those old-school variety shows," Bain says. "It was always cool to see a Dean Martin and some other big female star sing a song or something like that. Ella Fitzgerald and Frank Sinatra. So I thought, just by hanging out, sometimes there'd be one piano player playing, and then there'd be five other really good piano players around, and there's good vibes between them ... and then they would jump in. I thought that was such a great thing to see, because you never knew what would happen.

"Kris Bowers and Christian Sands — they played that song 'Ain't Misbehavin'," and that really happened on the spot," Bain says. "I was even surprised watching it, honestly. That was cool — I like that feeling."

True to Bain's background in singing, he also started a Capsulocity series of jazz divas, featuring female singers in stripped-down contexts. You might see Andromeda Turré with her mother, cellist Akua Dixon, or Sarah Elizabeth Charles accompanied only by drummer John Davis. Bain is also hoping to capture live concerts and expand the roster to include older generations of musicians.

"A lot of times you're just having fun, you're just playing music, and you're not thinking about taking a picture or taking a video," Bain says. "But I think the great thing about this generation is that we have the ability to do it ourselves. I'm just somebody — a vocalist with a camera. And Capsulocity came out of that."