Accessibility links
A Saxophonist From Santiago Cracks The Stateside Scene : A Blog Supreme Growing up in Chile, Melissa Aldana insisted on playing in clubs and transcribed solos like mad — as her father did before her. Her youthful dedication is beginning to pay off.

A Saxophonist From Santiago Cracks The Stateside Scene

A Saxophonist From Santiago Cracks The Stateside Scene 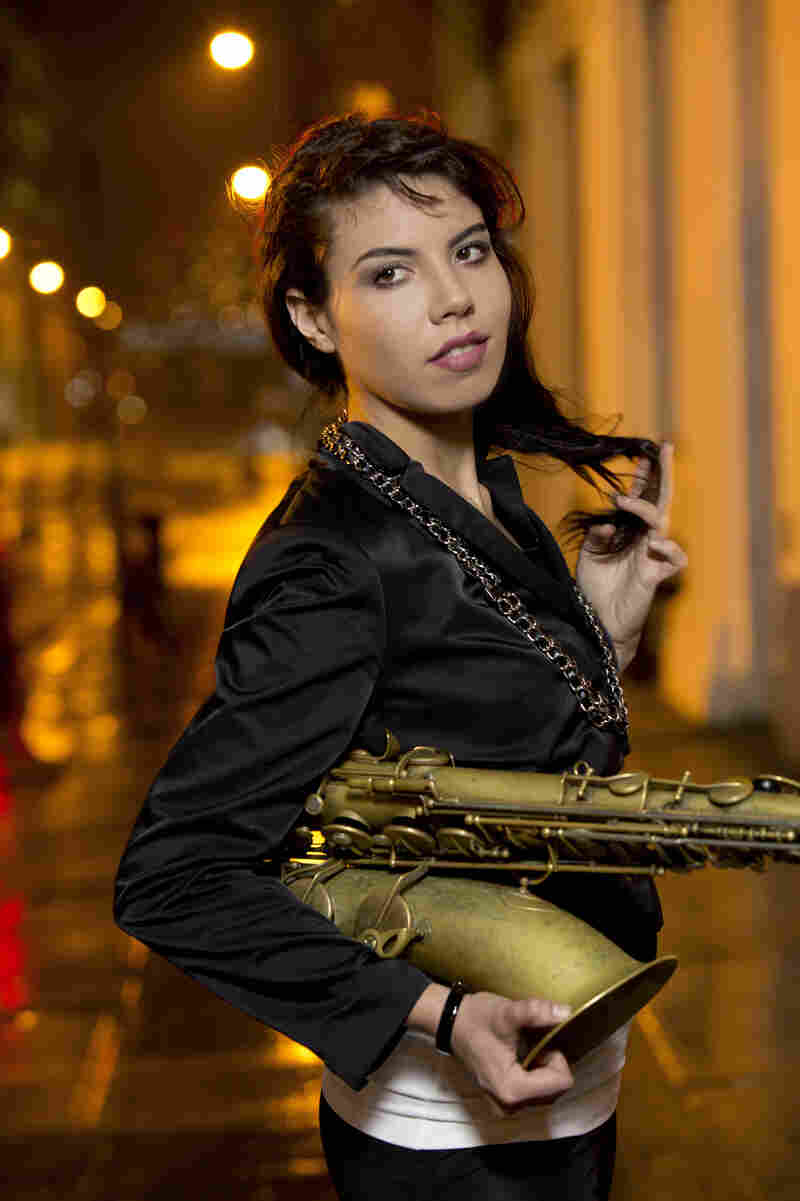 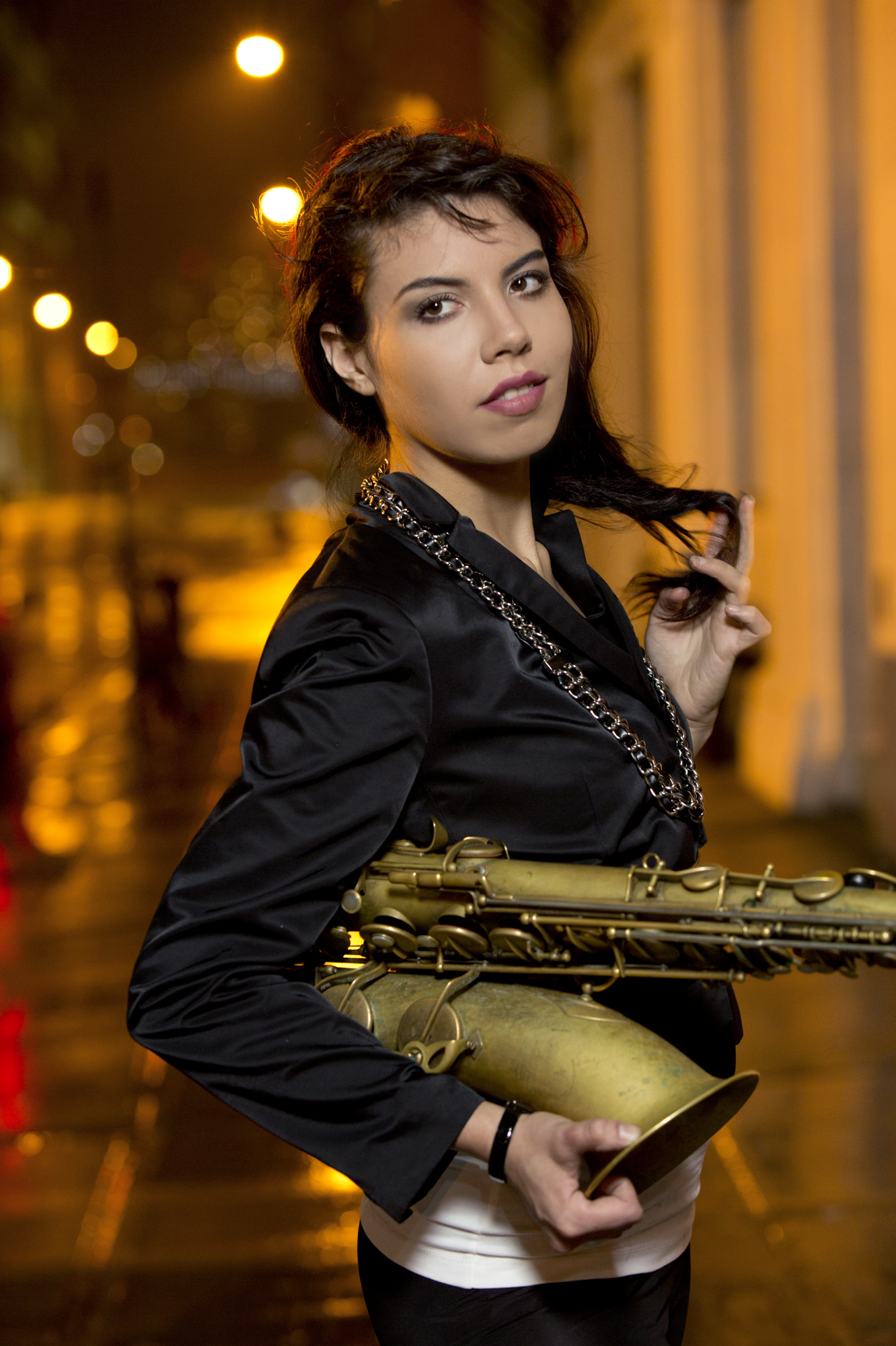 Melissa Aldana, 24, took after her father in pursuing jazz saxophone.

In the summer of 2003, a handful of jazz fans and musicians gathered to celebrate the opening of Thelonious, Lugar de Jazz, an important addition to the small but bustling jazz scene in Santiago, Chile. Among them was a 14-year-old saxophonist, probably the youngest person in the new club. She was attending under the watchful eye of her father — himself one of Chile's most renowned jazzmen — but Melissa Aldana had insisted on being there.

"I was there the first night," she explained to me in a recent interview. "I was trying to play because it was supposed to be an open jam session, and then only a few people showed up."

Two years later, at 16, she was already headlining sets at the Club de Jazz de Santiago, the main hub of the Chilean jazz community until it was destroyed in a 2010 earthquake. I was studying abroad in Chile back in 2005, and went to see one of those shows. She was already playing with striking virtuosity, reminiscent of Michael Brecker. I later found out that whenever she wasn't tracking down jam sessions, she was studying solos.

"What really made the difference is that my dad made me transcribe a lot when I was young," she says. "Even to this day I still do — but [I don't] write it down or anything, to really memorize something."

Aldana's dedication to listening, as well as showing up to play as much as she could, has been key to her recent success. Last month, Aldana, now 24, won the Thelonious Monk International Jazz Saxophone Competition — a fitting honor, given that Monk's legacy inspired the club where she dug into the music 5,000 miles to the south. Among the prizes was a recording contract with Concord Music Group, which she plans to use to document a band featuring two fellow Latin American jazz musicians. You can hear her leading The Crash Trio on a WBGO and NPR Music broadcast Wednesday, Oct. 9.

Like many young jazz musicians with high aspirations, Melissa Aldana is now based in New York City. Unlike most of her peers, however, her journey began in the southern hemisphere at a time when jazz musicians from the north rarely visited.

When I first heard Aldana play, her virtuosity was impressive, but what really blew me away was the maturity of her sound. It manifests through clean, nuanced phrasing reminiscent of her other early idol, Sonny Rollins.

In Chile, people will send me pictures of them having a drink because I won. Everyone is really happy. I feel really lucky that Chile has given me so much support.

"When I turned 13, I heard Sonny Rollins play, and I just freaked out," Aldana says. "I couldn't believe that somebody could play saxophone like that — I was just so amazed." When her father, saxophonist Marcos Aldana, gave her an alto sax for her birthday that year, she admitted to being disappointed. "A few months later: 'Dad, I need a tenor.'"

From that point forward, she would voraciously swap MP3s on Napster, wear out her dad's old cassettes and do anything else to get her ears around the sounds of her adopted instrument. Aldana also knew that, eventually, she would have to continue her path abroad.

That chance came in 2005, when she met pianist Danilo Pérez during a tour of South America with the Wayne Shorter quartet. Aldana described meeting Pérez as the most important moment of her jazz life in Chile: He invited her to perform at the Panama Jazz Festival, where she met representatives of Berklee College of Music and New England Conservatory to arrange auditions. She ended up being accepted at both schools, and chose to attend Berklee.

"It was one of the most wonderful things that happened to me in Santiago, meeting Danilo," she says. "He was definitely my connection." The relationship doesn't end there, either: Pérez's wife is one of her father's former saxophone students.

Auspicious coincidences may have brought Aldana to the U.S., but when she arrived, she quickly realized that she had much more work ahead of her.

"When I went to Berklee, most of the people around me went to musical high schools," Aldana says. "I didn't have a chance to experience a lot of things that I would have had I been living in the States." She cites an example. "Now, everyone gets [musical] information, but when I grew up it was Michael [Brecker] and Branford [Marsalis], those were the guys. I never heard about Mark Turner until I moved to the States." 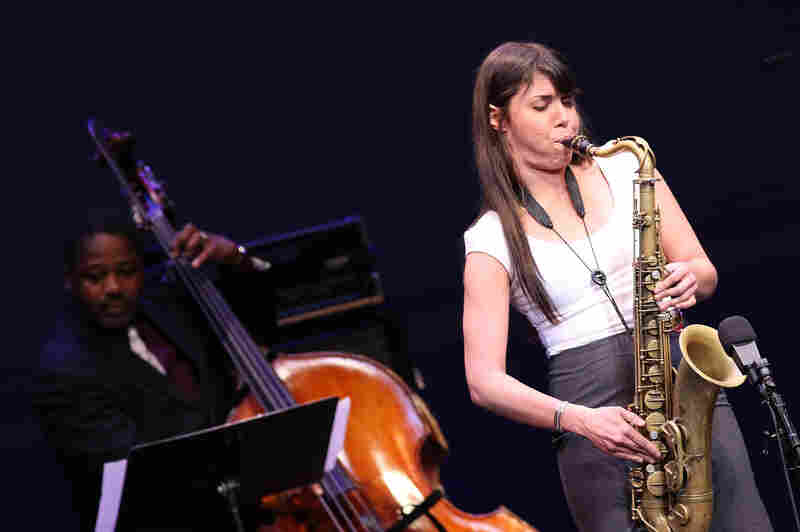 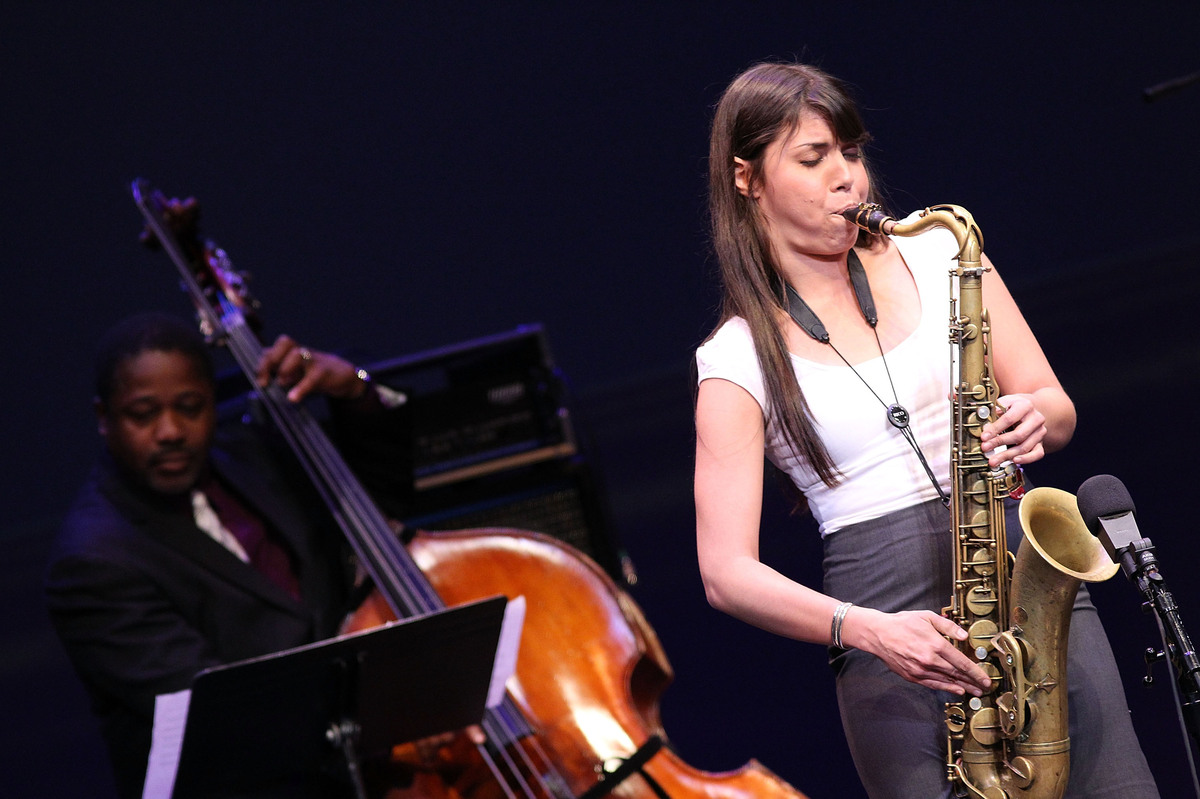 Backed by bassist Rodney Whitaker, Melissa Aldana gives the winning performance in the final round of the 2013 Thelonious Monk International Jazz Saxophone Competition.

Ultimately, her dedication to the woodshed overcame these cultural challenges. In addition to transcribing vigorously, she forged strong connections with some of Berklee's renowned teachers — trombonist Hal Crook and saxophonist George Garzone in particular.

The Boston school is also where she met Cuban drummer Francisco Mela, who later became one-third of her current outfit, The Crash Trio. (Bassist Pablo Menares, a fellow Chilean emigre, rounds out the group.) Once Aldana had moved to New York, Mela also gave the impetus for creating the ensemble. It has rehearsed together steadily for nearly a year.

"It all comes from the idea of having a stable band, where I can really work out ideas, really grow up and make as many mistakes as I can — try to look for new directions in my playing," she says. "I can really feel how my mind is learning every time that I play with them."

Though it's a vehicle for Aldana's compositions and experiments, The Crash Trio also builds from the shared experience of the three friends, each of whom has traveled thousands of miles to New York. "That's one of the things that makes me feel so blessed: I've always had people who really trust me and really believe in me," Aldana says. "To this day, they are like my family."

Even though she left Chile in 2006, Aldana continues to connect with other young Chilean jazz musicians. She last flew down this summer for a record-release party with four of Chile's most ambitious improvisers: Menares, guitarist Nicolas Vera, trumpeter Sebastian Jordán and drummer Felix Lecaros. Vera and Jordán live in Santiago; the others live in New York. Together known as La Resistencia, they are planning a New York reunion sometime next year.

I wrote about some of these musicians last year — Vera and Jordán in particular, who co-founded the record label Discos Pendiente along with producer Roberto Barahona. La Resistencia is an outgrowth of the label's recent success; Aldana says she hopes it will pave the way for more Chilean musicians to connect with jazz currents in the U.S.

A trailer for the self-titled album from Chilean collective La Resistencia, featuring Melissa Aldana on saxophone.

"What I feel like my part in this project is trying to create [is] a bridge between New York and Chile — to introduce them to people in New York, play concerts in Chile, to join forces," she says. "Nico and Sebastian came up with the idea for La Resistencia, which is an excuse for us to play together. That's the whole reason of the band — to play together and hang out together.

"The young people like Nicolas and Sebastian have a lot of initiative to start doing things," Aldana adds. "With that, they are helping the new generation to get new opportunities."

Aldana's success abroad — the Monk Competition follows two solo albums out already — has also made her a bona fide star in her home country. She was featured recently on the cover of Chile's pop-culture magazine Ya.

"In Chile, people will send me pictures of them having a drink because I won," Aldana says. "Everyone is really happy. I feel really lucky that Chile has given me so much support."

In return, she still makes a point to get back and play at Thelonious. In the last 10 years, the club has become a beacon of hip in Santiago's Bellavista neighborhood and home to the city's passionate cohort of jazzistas. She says it's her favorite in the city.

"Thelonious is the only club that I'll go to Chile and play at," she says. "I really like the vibe there."