Accessibility links
Remembering Jim Hall, A Different Sort Of Guitar God : A Blog Supreme The guitarist said he didn't "really have all that much technique anyway," but it was clearly enough to influence half a century of jazz musicians. Peers and proteges like Sonny Rollins, Julian Lage and John Scofield reflect on one of the finest ever on his instrument. 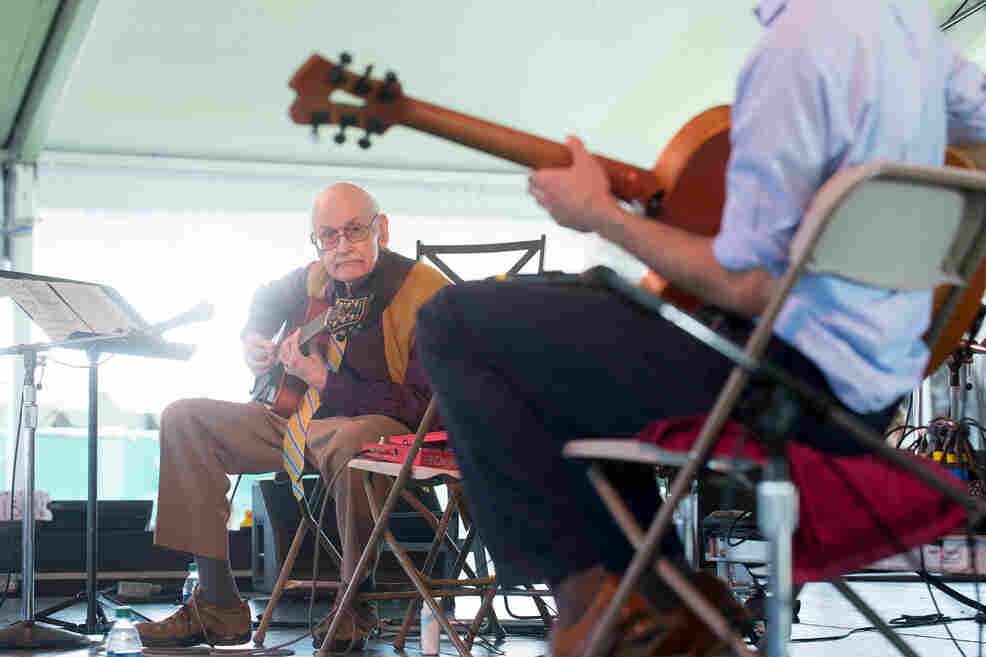 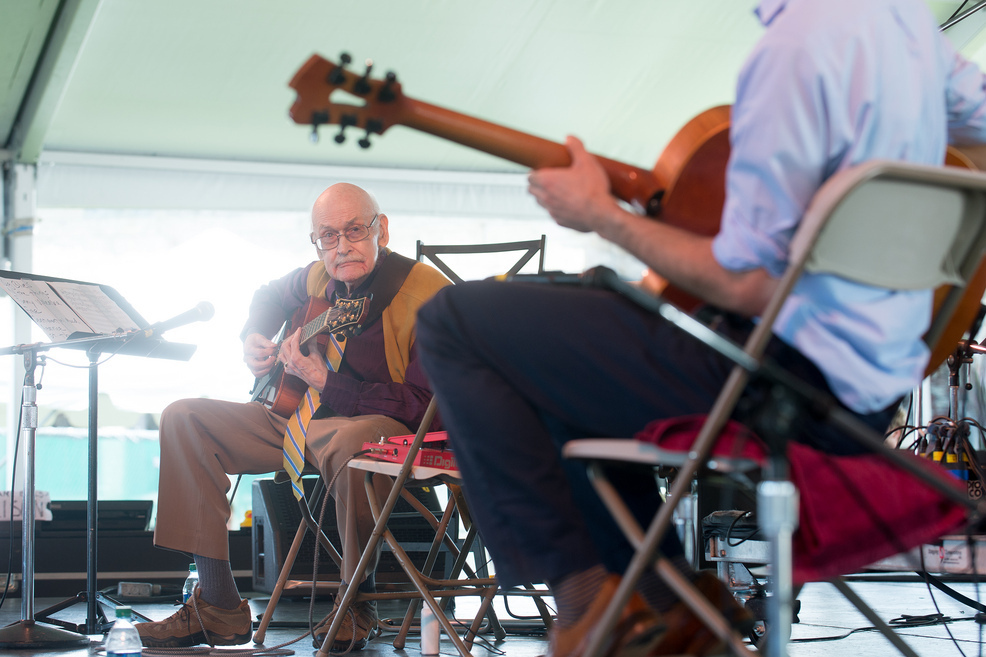 Jim Hall performs with his trio and fellow guitarist Julian Lage at the 2013 Newport Jazz Festival.

Jim Hall was a guitar god, but not in the sense that he could blaze through a zillion notes a minute. He was worshipped by guitarists around the world, but you'd never know it from talking to him.

"I don't really have all that much technique anyway, so I try to the best with what I have you know," he said to me earlier this year.

The best he had influenced half a century of jazz musicians, earned him the National Endowment for the Arts Jazz Master honor and widely designated him as one of the greatest jazz guitarists of all time. It was also enough to be named one of the 25 guitarists "who shook the world," along with Jimi Hendrix and Eddie Van Halen, according to Guitar Player magazine in 1992.

Jim Hall died in his sleep early Tuesday morning, according to an announcement from his daughter, Devra Hall Levy. His death came less than a week after celebrating his 83rd birthday.

Hall didn't start with much. He and his brother were raised by a single mother in public housing in Cleveland. Yet he told WHYY's Fresh Air in 1989 that she managed to buy him a guitar when he was 9.

"We sort of paid it off a dollar and a quarter or something a week to this music store in Cleveland and I took lessons," Hall said. "I think the lessons were seventy-five cents and the rest went to the guitar. So it took about a year to actually pay it off."

Jim Hall went on to study composition and theory at the Cleveland Institute of Music — there was no guitar program there in the early 1950s. But he wanted to be a guitarist, so he took off for Los Angeles, where he made his name in the late drummer Chico Hamilton's adventurous group in 1955. Two years later, Hall was leading his own group.

When the guitarist moved to New York, his talents caught the attention of the man known as "the saxophone colossus," Sonny Rollins.

"He was able to be a dominant player, a very forceful player but he was also sensitive," Rollins said. "You know, that was remarkable. So he was ideal as far as I was concerned for the band that we had together."

Hall's playing with Rollins cemented the guitarist's reputation as a musician who knew when to play hard and when to leave spaces between the notes. That approach influenced guitarist John Scofield.

"It was just [a] very elegant, elegant thing that he did that affected all of, just about all of the guitar players after him I think," Scofield said.

Guitarists like 25-year old Julian Lage, who first met — and was encouraged by Hall — when Lage was an 11-year old phenom. The two became friends and played together at this past summer's Newport Jazz Festival.

"For someone who has had such an impact on just the aesthetic of improvised music and guitar, as a total guitar hero, there was such a degree of humility that — it wasn't that he downplayed what he did — he had this sense that it was part of something way bigger," Lage said. "There are players who music is a separate thing and you have to go there. And with Jim it's he's always that."

And in typical fashion, Jim Hall always thought he could be better. He always tried new sounds and new groups.

"The past is a nice place to visit but I would not want to live there," he said. "I like to go straight ahead."

Thankfully, he took a lot of us along for the ride.