Accessibility links
Remembering Jazz Legend Charlie Haden, Who Crafted His Voice In Bass : A Blog Supreme Polio damaged Haden's voice when he was young, but as a bassist and composer, he helped shape the sound of jazz and spanned country and gospel. He died Friday at 76. 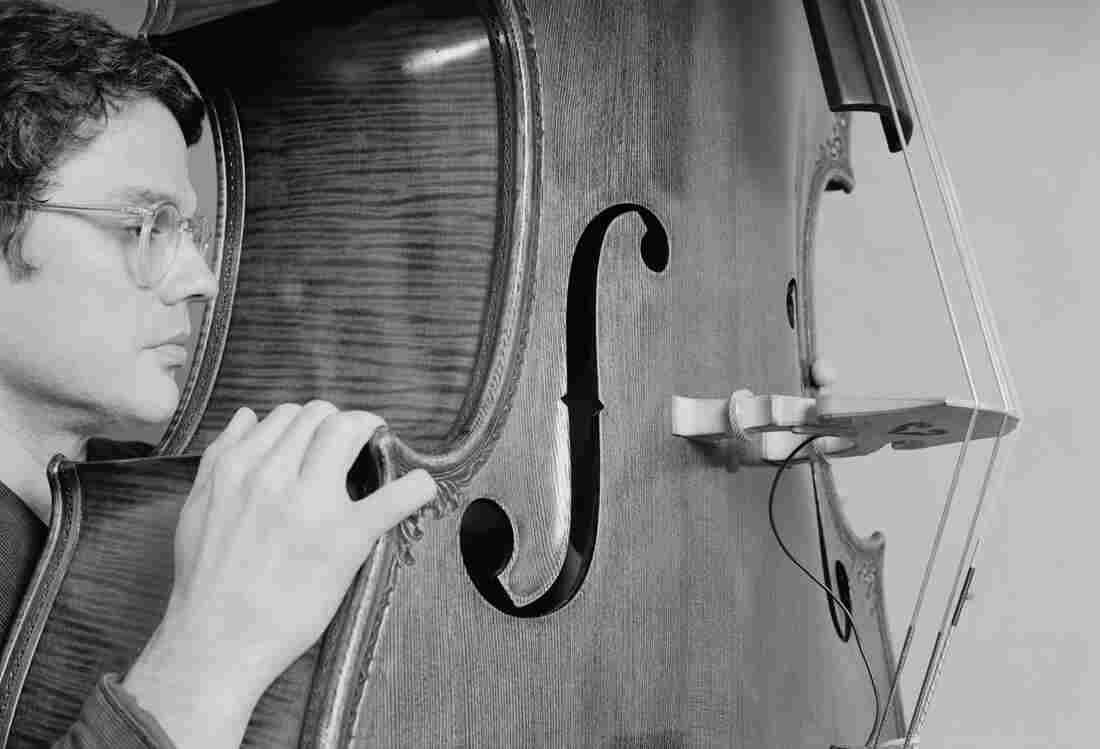 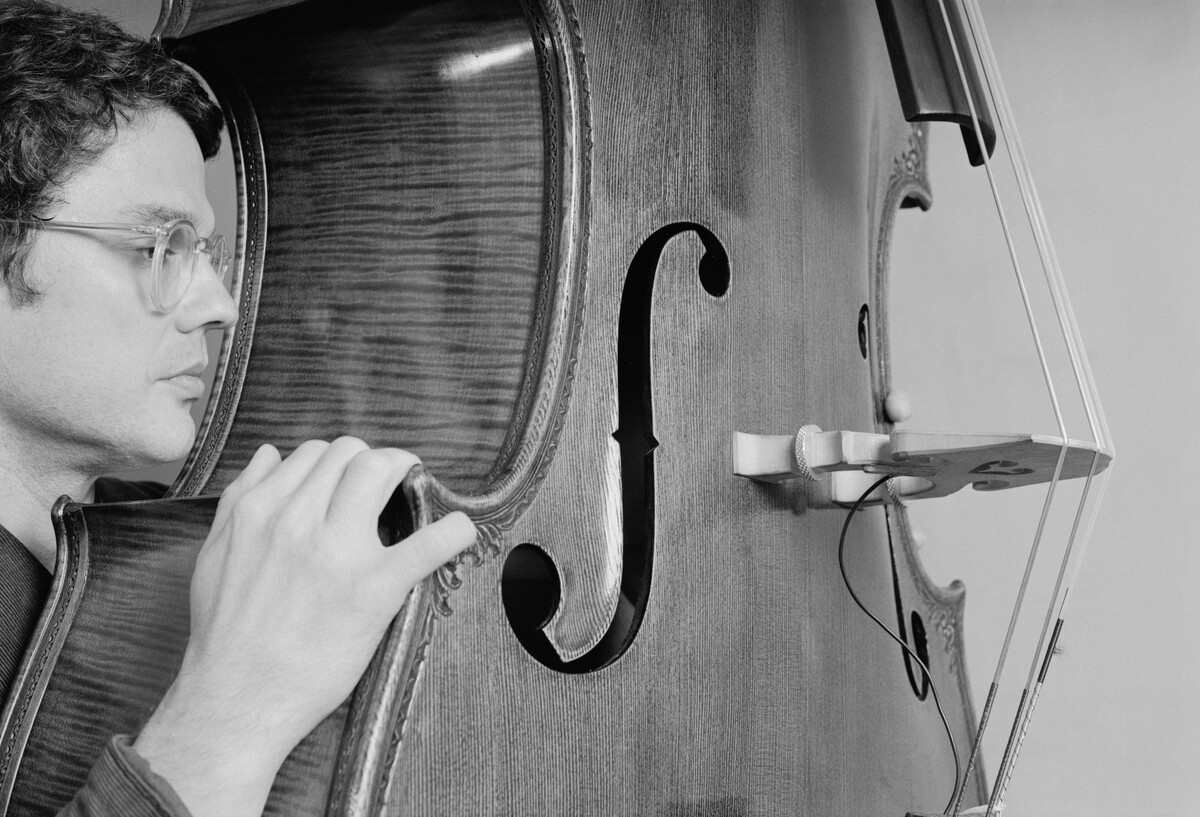 Jazz legend Charlie Haden has died. Polio damaged Haden's voice when he was young, but as a bassist and composer, Haden helped shape the sound of jazz while still spanning country and gospel. For more on Haden's life and music, you can hear Melissa Block speak with Slate columnist and jazz critic Fred Kaplan at the audio link on this page.

Bassist and composer Charlie Haden, whose resonant playing and penetrating melodic craft influenced generations of jazz musicians, died this morning in Los Angeles. He was 76.

Haden's death was announced by his record label, ECM Records, which noted that Ruth Cameron, his wife of 30 years, and his children Josh, Tanya, Rachel and Petra were all by his side at the time of his death, which the label attributed to a "prolonged illness."

Born August 6, 1937 in Shenandoah, Iowa, and raised largely in Springfield, Missouri, Haden grew up in a family that hosted its own country-western music radio program. He sang on air in the family band from before the age of two. At age 15, however, he contracted polio; the disease paralyzed his vocal cords, and he turned to learning bass.

In 1957, Haden moved to Los Angeles, where he integrated himself quickly into the West Coast jazz community — including working with saxophonist and composer Ornette Coleman. Their collaboration over decades, onstage and on record, not only anchored Coleman's innovations in harmony and melody, but also generated new possibilities for his own instrument in group improvisation.

His work with Coleman made him an icon of avant-garde jazz, but in a career that spanned over 50 years, Haden wrote and played in many varied contexts. His Liberation Music Orchestra, a large-ensemble collaboration with composer-arranger Carla Bley, performed and recorded political protest songs for over 30 years. His Quartet West ensemble, featuring pianist Alan Broadbent and saxophonist Ernie Watts, provided avenues for more traditional hard bop and backing vocalists. And in 2008, he revisited his country roots with an album called Rambling Boy that gathered his wife, son and triplet daughters in a new family band.

As a sideman, Haden was the bassist for many of pianist Keith Jarrett's bands of the 1960s and '70s. The group Old and New Dreams reunited Coleman's sidemen, sometimes to reinterpret Coleman's compositions. He frequently performed in duet settings, which brought him into close contact with fellow jazz greats like Hank Jones, Alice Coltrane and Pat Metheny. And in 1982, he introduced jazz studies to the California Institute of the Arts, which is now one of the premier programs of its kind.

In interviews and onstage, often Haden spoke about the artist's duty to introduce beauty into a conflicted world. "That's what I tell my students at California Institute of the Arts where I teach for 27 years," he said to Martin. "I tell them if you strive to be a good person, maybe you might become a great jazz musician."

Earlier this year, Haden released his latest album, a collection of duets with Keith Jarrett. It ends with the two standards "Every Time We Say Goodbye" and "Goodbye," and is titled Last Dance.

We're listening to one of the towering figures of modern jazz - bass player and composer Charlie Haden. He died today at age 76.

BLOCK: Haden began performing as a child singing on the radio in his native Iowa, but as he explained in an NPR interview a few years ago, childhood polio changed that.

CHARLIE HADEN: I think from being a singer, going into jazz and that's one of the things that polio did for me is took away my ability to sing with a range because it paralyzed my vocal cords. So that's when I started playing.

BLOCK: Charlie Haden made his mark with a saxophonist Ornette Coleman's ground-breaking quartet in the late 1950s in Los Angeles and went on to play with everyone from Stan Getz to Pat Metheny. Joining us to talk about Charlie is Fred Kaplan, columnist for Slate and jazz critic for the magazine Stereophile. Thanks for being with us.

BLOCK: And you knew Charlie Haden quite well. Tell us what it was like to see Charlie perform.

KAPLAN: Well, you know, there was really - just watching him play was really something. He would lean over his bass, almost in a perpendicular angle to listen to what he was doing more keenly. He would turn his head away from the bass. He had such an intense expression on his face. He knew exactly what he was trying to do. And he would beam - I mean, really - it was almost an ecstatic expression, when he heard one of his band mates play a nice riff on some chord. And he knew exactly how to compound it. You know, you mentioned that he grew up in a family of singers. He was singing perfect harmony, when he was two years old.

KAPLAN: His father would train the family to hit a note exactly right - neither sharp nor flat. And that stayed with him through his entire career.

BLOCK: Do you think he changed how we hear the bass - the role of the bass in jazz music?

KAPLAN: Oh, absolutely. I mean, before Charlie, most bassists, you know, they kept time. And say if a pianist was playing a C-chord, they would play the C note and maybe some other notes. Charlie - you know, he's called a free jazz musician and some people think that means abstract or chaotic. What it means is that, you know, he was a romantic. He loved nothing more than a beautiful melody. But he didn't like to be boxed in with a chord structure. So he would take what he was doing, where he wanted to go - he would play a bit of the melody, a counter melody. He would open it up to an entirely different direction, but somehow bring it right back down to earth. He greatly expanded, almost limitlessly, the role that a bass player had, while keeping perfect time. Paul Blythe (ph), the pianist, told me that when he first heard Charlie playing when he was 19, he said he had perfect time. And other musicians would watch him. They didn't want to play with him in a jam session. They just wanted to listen to this guy who could do so much, while keeping perfect time.

BLOCK: Charlie Haden also did mix politics with his music. He was the founder of the Liberation Music Orchestra, back in the '60s. How did those to intersect for him?

KAPLAN: Well, you know, he came up through country music and he saw a link between country music with its, you know, roots in Scottish and British rebels, coming over to this country. And the rebellion that was often inherent in blues and jazz, too. He saw them both as personifying and expressing a sort of struggle. And his politics were leftist but, you know, I think we can overstate that. What really drew him - what was the music and the beauty of the music. And even the political phase just sort of the stirring reverie of some of those protests and revolutionary songs. One of his most beautiful songs - one of his own compositions, which he played many times, was called "Song For Che," based on Che Guevara. But, you know, it's not that different from another song he wrote called "Song (For Ruth)," which was about his wife, Ruth Cameron. He was a romantic. He was a romantic revolutionary.

BLOCK: Fred Kaplan, thanks so much for talking to us.

BLOCK: Fred Kaplan, columnist with Slate and jazz critic for the magazine, Stereophile. We were remembering these bass player Charlie Haden, who died today at age 76. You're listening to ALL THINGS CONSIDERED.