Accessibility links
Billy Strayhorn In Five Songs : A Blog Supreme Though overshadowed during his own lifetime by his employer, Duke Ellington, the composer-arranger wrote more than 1,000 pieces. Here are takes on his most famous tunes. 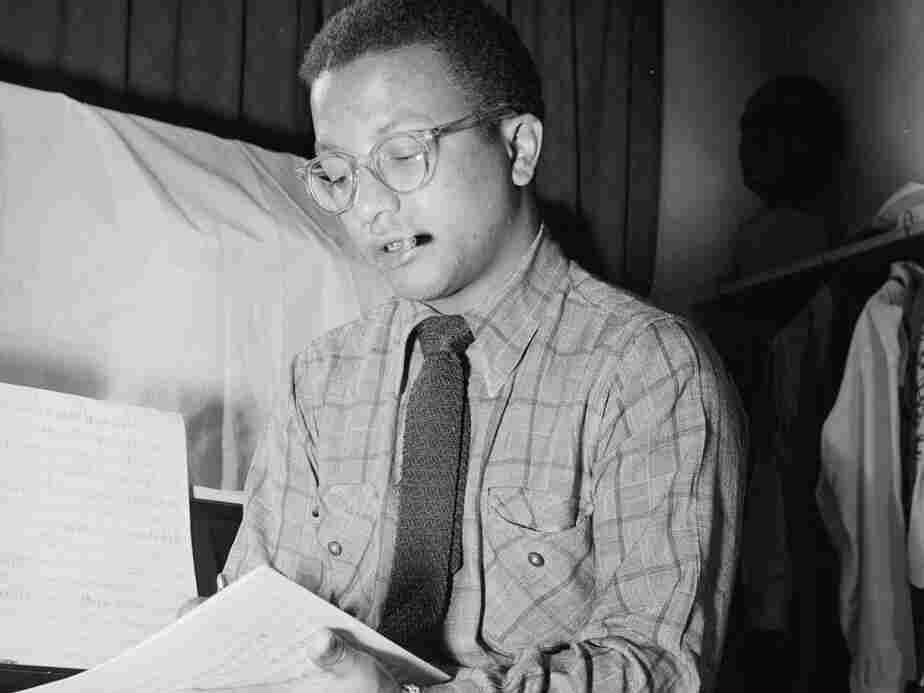 Billy Strayhorn, pictured here in the 1940s, wrote more than 1,000 works, most of them for Duke Ellington. William P. Gottlieb/Library of Congress hide caption 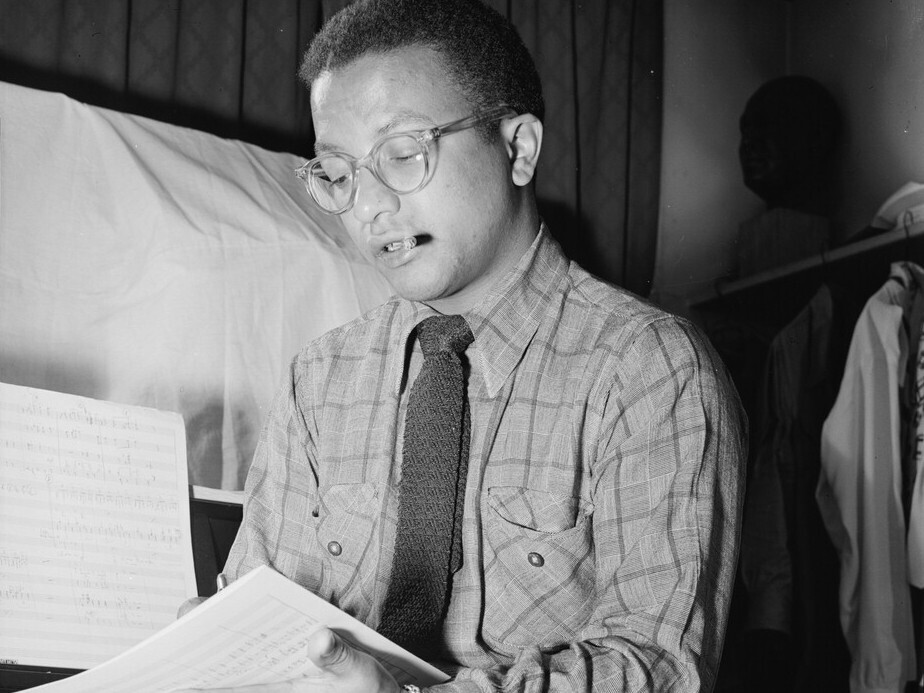 Billy Strayhorn, pictured here in the 1940s, wrote more than 1,000 works, most of them for Duke Ellington.

The composer Billy Strayhorn spent almost all of his adult life in the professional company of Duke Ellington, operating as a crucial but seldom visible creative partner whose own greatness has finally emerged only in the past two decades — long after his death in 1967 at age 51. The author of "Take The 'A' Train," "Lush Life" and "Satin Doll," Strayhorn wrote songs, suites, scores and other works that run to well over 1,000 pieces in all. He was an impeccable and sensitive craftsman whose own musical universe overlapped and expanded the vast world of Ellingtonia; his tonal language ran the gamut from classical to bebop.

This month marks Strayhorn's centennial. He was born in Dayton, Ohio on Nov. 29, 1915 and grew up in Pittsburgh, a jazz capital known for producing other pianists and composers. A musical prodigy, he began composing while in high school, writing a musical called Fantastic Rhythm that included the future standard "My Little Brown Book."

In late 1938, while Ellington was playing in Pittsburgh, a two-degrees-of-separation friendship resulted in the bandleader granting Strayhorn a private audience. Ellington was so impressed that he hired Strayhorn and moved him into Ellington's Harlem apartment, beginning a nearly 30-year collaboration that saw only one brief pause in the 1950s. (His life is memorably rendered in David Hajdu's biography Lush Life, and Walter van de Leur's Something to Live For offers a definitive account and analysis of the vast amount of music that he wrote for both Ellington and others.)

It's been noted that Strayhorn's cultural identity in the mid-20th-century United States was, to say the least, challenging. He was a gay African-American jazz artist. Yet he lived as he pleased, with quiet courage and an aesthetic sophistication underlined by beauty, loneliness and love. In 1967, Ellington, devastated by Strayhorn's death, delivered a moving eulogy that praised his friend and writing partner as an artistic cosmopolitan suffused with humane grace:

He spoke English perfectly and French very well, but condescension did not enter into his mind. He demanded freedom of expression and lived in what we consider the most important and moral of freedoms: freedom from hate, unconditionally; freedom from self-pity (even throughout all the pain and bad news); freedom from fear of possibly doing something that might help another more than it might himself; and freedom from the kind of pride that could make a man feel he was better than his brother or neighbor.

Here are five examples of Strayhorn's spirit and vision made manifest.

Take The 'A' Train

The song that launched more than 1,000 Ellington broadcasts and concerts, "Take The 'A' Train" ironically is not a prime example of Strayhorn's compositional style. Walter van de Leur writes that "its string of choruses, ample solo space against background riffs, and unison saxophone lines with snappy brass answers" places it more in the realm of standard big-band conventions of the time, but also notes that its harmonies and rhythms anticipate the modernistic turns of bebop.

Described by Strayhorn as an explanation of how to ride the subway to Harlem, the song captures the energy of the cultural capital of black America at the dawn of the 1940s. Ellington's epic 1952 version kicks off with an extended piano introduction, then sets up singer Betty Roche's bop-and-scat-inflected spin on Strayhorn's lyrics. (A decade earlier, Roche made what may be the first vocal recording of the song with Ellington's orchestra in late 1942 for the wartime-morale movie Reveille with Beverly, in a sequence that depicted Roche, Ellington and the orchestra swinging the song aboard a passenger car.) Tenor saxophonist Paul Gonsalves comes on for the second half of the tune, gliding along slowly with the orchestra at first, then bursting into a full-throttle gallop that concludes with a stirring cadenza.

Along with "Take The 'A' Train," Strayhorn is best known for this song. It's astonishing to think that he was barely out of his teens when he wrote it, given its booze-jaded viewpoint of a seemingly much older person whiling away his life "in some small dive." Not an easy song to sing (no less than Frank Sinatra gave up on it during his 1958 sessions for Only the Lonely), it was minted as a standard in 1949 by Nat King Cole with a version that Strayhorn despised, largely because of the liberties Pete Rugolo took with the arrangement.

Yet it was Cole's record that singer Johnny Hartman and saxophonist John Coltrane heard on the radio while driving to a 1963 studio date, causing them to add the song to their recording schedule that day. Hartman's elegant baritone-barfly rendition, gracefully buffeted along by Coltrane's saxophone runs, perfectly conjures a twilight world of melancholia, all filtered through the ebb and flow of a smoky, late-afternoon buzz. (And check out the composer himself performing the song in 1964 with wry self-regard.)

Many of Strayhorn's compositions evoke dream-misted psychological landscapes with titles that sometimes invoke physical objects or places to help power those projections. The chromatic moon-and-fog melody of "Chelsea Bridge" is one such instance, and what better horn to come swirling out of the mist than that of tenor saxophonist Ben Webster, who joined Ellington's orchestra for a brief but significant two-year stint not long after Strayhorn was enlisted. In addition to arranging and conducting, Strayhorn played piano on this particular date, providing a solo that demonstrates the spare complexity informing much of his work.

Also known as "U.M.M.G.," this piece is an ode to Arthur Logan, Strayhorn and Ellington's doctor. Its spry rhythmic quality highlights the jaunty side of Strayhorn's musical personality. As van de Leur observes, the tune also nods to the Copasetics, an ensemble of tap dancers Strayhdorn wrote for. It plumbs new harmonic depths and finds a ready interpreter in bebop paragon Dizzy Gillespie (who also recorded it separately with the Ellington orchestra for the album Jazz Party).

This album was arranged by a young Clare Fischer, fresh off his work with the vocal group the Hi-Lo's, and his use of woodwinds may be an acquired taste for some. The arrangements do provide an example of how other composers and arrangers responded to Strayhorn's influence. "All I ever did (was) try to do what Strayhorn did," famed composer Gil Evans told David Hadju.

Numerous ballads are strewn throughout the Strayhorn songbook like so many lovely flowers, and many of them served as showcases for alto saxophonist Johnny Hodges. This dark, mortality-haunted bloom was Strayhorn's final contribution to the Ellington orchestra, completed as the first part of an intended suite while he was in the hospital, slowly succumbing to esophageal cancer.

Not long after Strayhorn's death, his longtime friend and collaborator took the band into the studio to make ...And His Mother Called Him Bill, a memorial album of Strayhorn compositions and arrangements. On the LP's first side, a prominent place was given to "Blood Count," a minor-key incarnation of narrowing possibilities and unavoidable loss. "Blood Count" often showed up in saxophonist Stan Getz's late-period set lists, and Elvis Costello recorded a memorable version with lyrics he added to Strayhorn's elegiac melody. On the edge of death, the composer still made beauty out of life.