Accessibility links
How A Korean Jazz Festival Found A Huge Young Audience : A Blog Supreme In a picturesque setting a few hours from Seoul, hundreds of thousands of millennials camp out for a three-day weekend of jazz. Its secret? It might just be that the music comes ... well, not first.

How A Korean Jazz Festival Found A Huge Young Audience

How A Korean Jazz Festival Found A Huge Young Audience 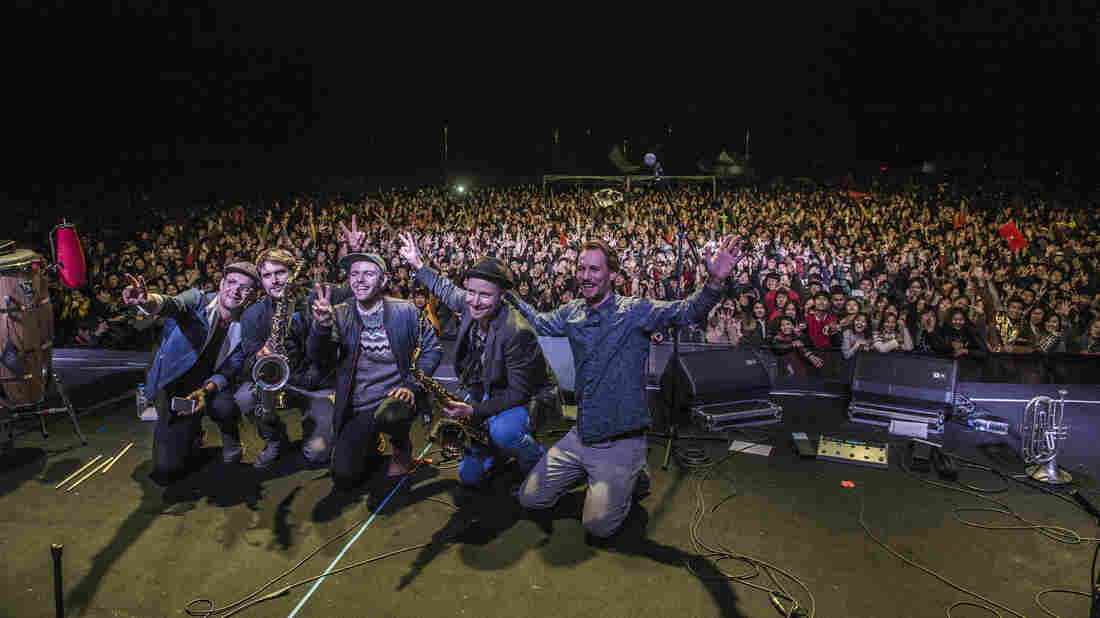 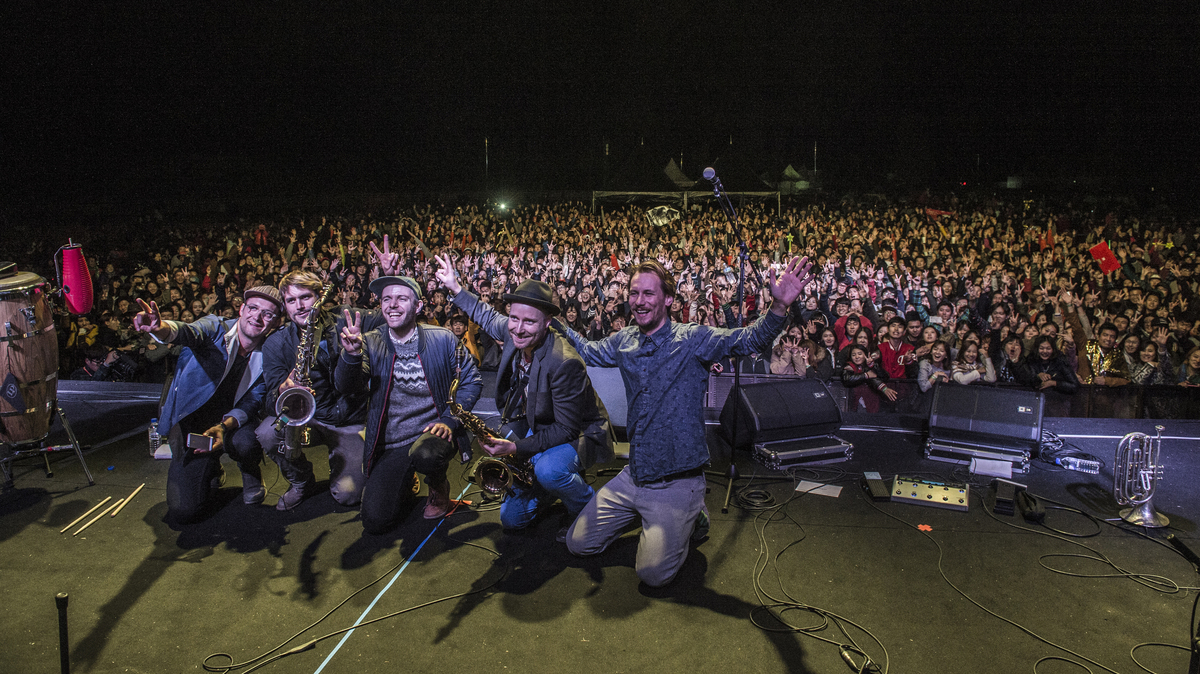 Danish Afrobeat-inspired band The KutiMangoes pose for photos with the crowd at the Jarasum International Jazz Festival.

After completing a sponsored trip to South Korea for music professionals in October, I stayed in the country, striking out on my own. I grabbed a train to the Jarasum International Jazz Festival, a couple hours from Seoul, and arrived in the middle of a set by the international power pairing of Paolo Fresu, Omar Sosa and Trilok Gurtu.

I did a double take — and then a triple take. A huge audience of mostly twentysomethings was smiling and dancing, showing big love for the music. I looked around for a plausible explanation. Was a K-pop video being projected on a screen near the jazz trio? No, a festival volunteer explained — the crowd's enthusiasm was all for the improvising trumpeter, pianist and percussionist onstage. Younger people, he said: They like jazz. 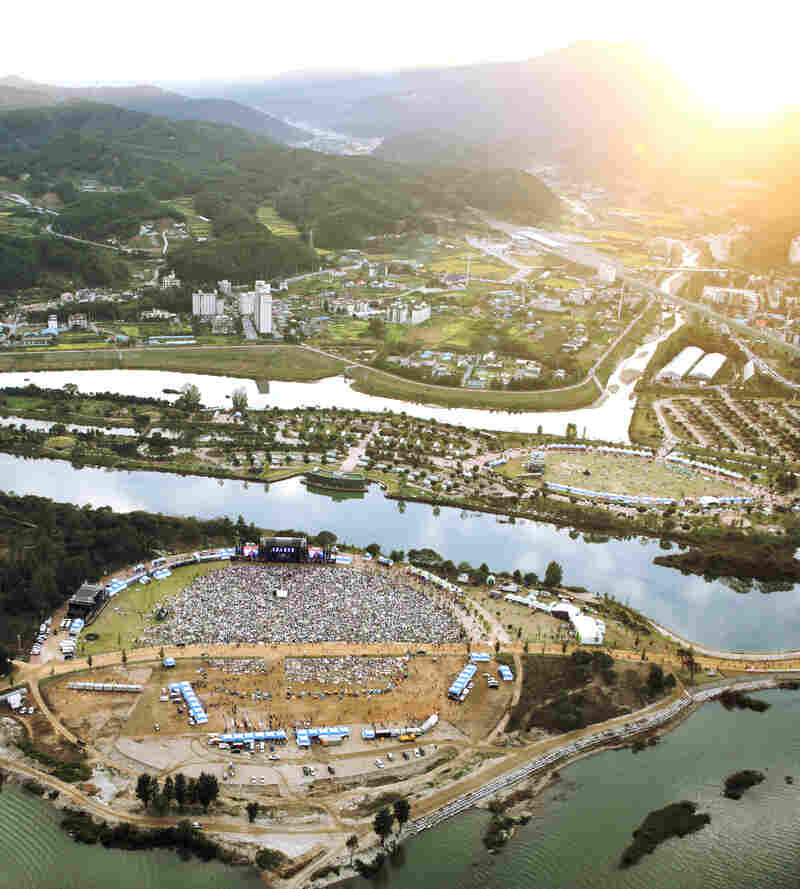 "Stepping onstage at the Jarasum Jazz Festival is like stumbling into an alternate universe where jazz is suddenly young, hip, sexy and cool," says Joshua Redman, the celebrated American saxophonist.

After Redman performed at Jarasum a few years ago, festival director In Jae-jin remembers the saxophonist saying he wanted to take half of the audience home to the U.S. In has gotten used to hearing that sort of thing.

"Actually, so many international guests are so surprised to see the young audience in Korea, especially for this festival," In says. "Wherever you attend jazz festivals, normally the audience is over 50 or even 60, but at my festival they are in their 20s and 30s."

Now in its 12th year, the Jarasum Jazz Festival regularly draws between 200,000 and 250,000 people over three days. Jarasum estimates that 88 percent of its 2015 audience was under age 40. To put this demographic in perspective, the numbers are basically flipped at the Newport Jazz Festival, where a 2012 survey found that 82 percent of its audience is over age 45.

The art of jazz is flourishing, we know, with young musicians developing the music all over the world. But the business of jazz sees much hand-wringing over the music's aging audience, its sea of gray hair. And nowhere in the world have I seen a jazz audience as young as at Jarasum: The crowd felt anachronistic, like a 21st-century resurrection of jazz's swing-era popularity.

A young jazz audience is such a rarity, in fact, that it's become a kind of holy grail for presenters. So how does Jarasum do it?

Zen And The Art of Festival Presentation

The conventional wisdom of growing a jazz-festival audience is to expand programming, which often means adding pop-friendly headliners. True, Jarasum is not exactly fraught with concern over jazz authenticity. On multiple stages, the festival presents a blend of jazz and world music, local and international acts, crowd-pleasing and crowd-challenging sounds. Jazz cognoscenti don't seem worried that Spyro Gyra is as likely to headline the festival as the Heath Brothers. Korean jazz talent seems fairly represented in the program, and there's also a popular annual competition for emerging Korean musicians. Jarasum's most striking programming feature is its globalism: Appearing this year were the Brazilian guitarist Badi Assad, Cameroon-born bassist Richard Bona and Russian saxophonist Igor Butman, along with many top musicians from Germany, 2015's "focus country." 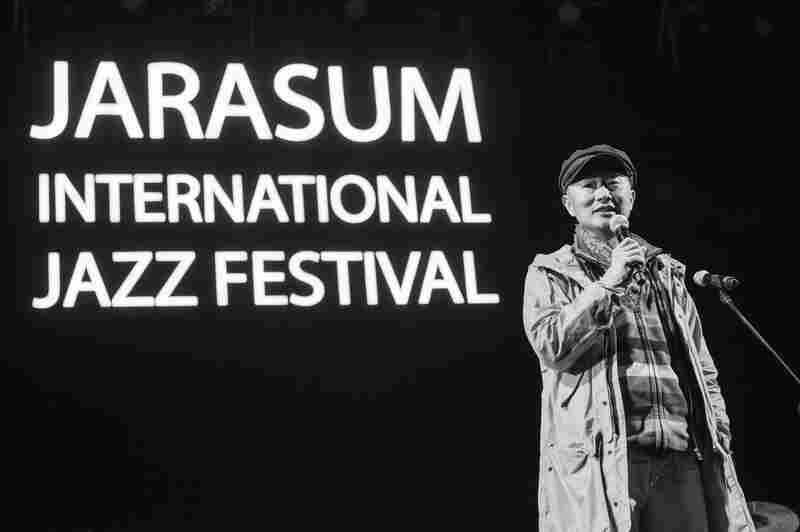 The big-tent approach isn't nearly the whole story, though. In fact, the festival literally depends on many small tents. When In Jae-jin first presented Jarasum in 2004, the festival's setting — a river island that was submerged during heavy rain — seemed like a quixotic choice at best. But a camping fad started around the same time and helped make the area a premier eco-destination.

Following the festival's early years, when In says his major funding from the local government came with too many heavy-handed requests (festival soccer fields, for one), he started building toward what he calls a "golden balance": one-third government funding, one-third corporate funding and one-third ticket revenues. After some rough patches, Jarasum's budget has now more or less settled on that three-part balance, and the festival is thriving. Korea's Ministry of Culture, Sports and Tourism named Jarasum the country's best festival of 2014. In himself has earned some fame, too, lecturing on "performance media" at a university and publishing a 2014 memoir titled Youth Is A Sizzling Jazz Festival.

Along with broad-minded programming, an attractive setting for camping and solid funding, there's a counterintuitive factor in Jarasum's success. "From the beginning," In explains, "the main themes of my festival were nature, friends and family, and rest and refreshment, with less emphasis on music."

Yes, that's correct. In attributes the success of his music festival to a philosophy of putting music last. Check out the branding in Jarasum's 2015 trailer:

In a commercial that Wes Anderson might have made, Jarasum sells a retro camping adventure, promoting the festival's river-island setting as a hipster nature wonderland. The names of performing musicians appear on a boat, map, book — props for a weekend in the country — sending a message that music is incidental to the overall Jarasum experience.

"I'm trying to give some dreams to the audience," In explained, when I asked him about the promo film. "They just want to spend one or two days having a very peaceful holiday with family and friends, and then maybe there's some music, too."

Just as significant is what the trailer does not have. There are no low angle shots of performing musicians, forcing the viewer to look up with obligatory reverence; there's no billing of "legendary artists," requiring insider knowledge of what makes them so legendary. Nowhere does Jarasum's trailer insinuate that only jazz heads will properly enjoy the festival.

At Jarasum, I often thought of the Telluride Bluegrass Festival near my home in Colorado, where a mountain setting and campground jam scene draw festivalgoers as much as the official music program. But Jarasum's eco-trendiness defines its appeal so overwhelmingly that its program can be irrelevant. On the festival's final afternoon, I found Kim Chan-hee, 26, and her boyfriend Hyeon, 32, snapping selfies next to a large Jarasum Jazz Festival sign. It was their second year at Jarasum, they said, though when I asked about their favorite act at this year's festival, they couldn't name even one.

"We just come here for the mood, for enjoying the atmosphere," Kim said, seeming a little puzzled that she needed to spell this out. "We brought a tent. We don't know a lot about jazz, but it's good to hear." About three-quarters of the festivalgoers I met had a similar story.

On the other end of the spectrum, I found Lee Cheong-ah, 28, listening attentively to the Jeon Yong Jun Group, a Korean quintet, while she enjoyed some wine and a picnic. (Festivalgoers may bring any food and drinks onto Jarasum's grounds, and often look like well-dressed nomads as they wheel their elaborate provisions around in stacked bags and coolers.) Lee said she's been listening to jazz since high school. Jazz is her favorite genre of music, and Michel Petrucciani is her favorite musician. Besides making an annual pilgrimage to Jarasum, Lee buys jazz recordings and regularly hits Seoul jazz bars like Once In A Blue Moon.

About a fourth of the festivalgoers I met were jazz fans of Lee's earnestness. The gulf between Kim Chan-hee and Lee Cheong-ah, between Jarasum's jazz agnostics and jazz aficionados, seems wide. Many festivalgoers couldn't care less about who's on the program, but the ones who do come across as true jazz devotees.

Some of Jarasum's most excited festivalgoers were local military men on holiday. At the festival entrance, a group of these camo-bedecked guys, all around 20 years old, told me they were about to hear live jazz for the first time. I wondered how they'd like the music.

"I was really taken by the youthful and extremely enthusiastic audience, as well as the huge turnout," says American guitarist John Scofield, who performed at Jarasum in 2012. "The younger Korean audiences in general are very supportive jazz enthusiasts who behave like they are at a 'rock concert' instead of jazz."

Even the many people at Jarasum who don't know jazz demonstrate this rock-style enthusiasm for it. That predilection might have something to do with South Korea's recent cultural history. For decades, an authoritarian Korean government put a damper on the country's musical development. So jazz is relatively new to Koreans.

"Though Korea also had a history of jazz during the swing-music era, the actual time of jazz's introduction in Korea was the late '80s," says Kim Gwang-hyun, editor-in-chief of Korea's monthly jazz magazine Jazzpeople. "During the late '80s, the democratization era in Korea, different types of culture were introduced. Also, jazz was used in many movies and television shows during this time, which helped the popularization." 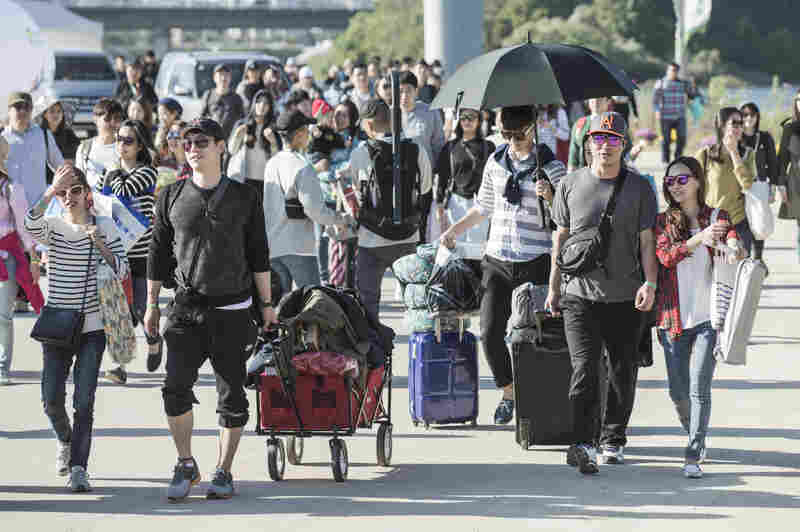 In Korea, jazz was not a major musical culture against which rock rebelled, so Koreans aren't predisposed to see jazz as the obsolete predecessor of fresh, youthful rock and pop. In other words, a specific musical history gives jazz greater odds of likability among young Koreans.

But is Jarasum building a lasting jazz audience? After attending the festival, do all those young urbanites pour into Seoul jazz clubs? Do they get on their smartphones and buy everything in Scofield's back catalog? The general perception is that some do, maybe, but not most. For "young Koreans who live busy lives in big cities,"Jazzpeople's Kim says, "jazz festivals are a once-a-year experience of spending picnic time with music. It's not easy to expect serious listening from them."

The big opportunity at the Jarasum festival — the audience doesn't care if it's jazz — can be a big problem outside the festival: The audience doesn't care enough about jazz to develop a deeper appreciation. While Jarasum exposes people to jazz in a live setting, Kim says education is needed to nurture an enduring audience. And that raises a paradox: A more edifying approach to jazz might alienate many of those who now enjoy the music so casually at the festival.

"This was a new experience for the young Koreans, and in many ways it is successful," Kim says. "But I have to say that one festival can't change everything. It is important for individuals to listen more and be eager to learn more."

So it's hard to say how many of Jarasum's 200,000-plus attendees will become serious jazz fans. Still, the festival manages to have millennials crowding its jazz stages, and that alone feels like a victory to this American. If, for only one October weekend each year, every Korean hipster wants to be at a jazz festival, it has to be good for the music, right?

"Most of the audience doesn't have much opportunity to listen to jazz," promoter In Jae-jin says. "But at my festival, they can have that chance, and maybe the audience can find that jazz is quite nice and not bad."

Americans can't replicate the relative novelty of jazz in Korea, and we wouldn't want to; our deep jazz history is a national treasure. But American festivals might learn something from Jarasum's gentle jazz presentation, which offers up the music as one part of a refreshing weekend; which doesn't expect pledges to a jazz fraternity; which is content with a reception of "quite nice and not bad."

As someone who's too often been the only twenty- or thirtysomething in a crowd, the young, animated audience at Jarasum gave me instinctive hope. During my weekend at Jarasum, I didn't worry about jazz's future at all.

Michelle Mercer reviews jazz and other music for All Things Considered.