Accessibility links
What Was 'A Blog Supreme'? : A Blog Supreme A history of NPR's jazz thing, and a goodbye, from its editor. 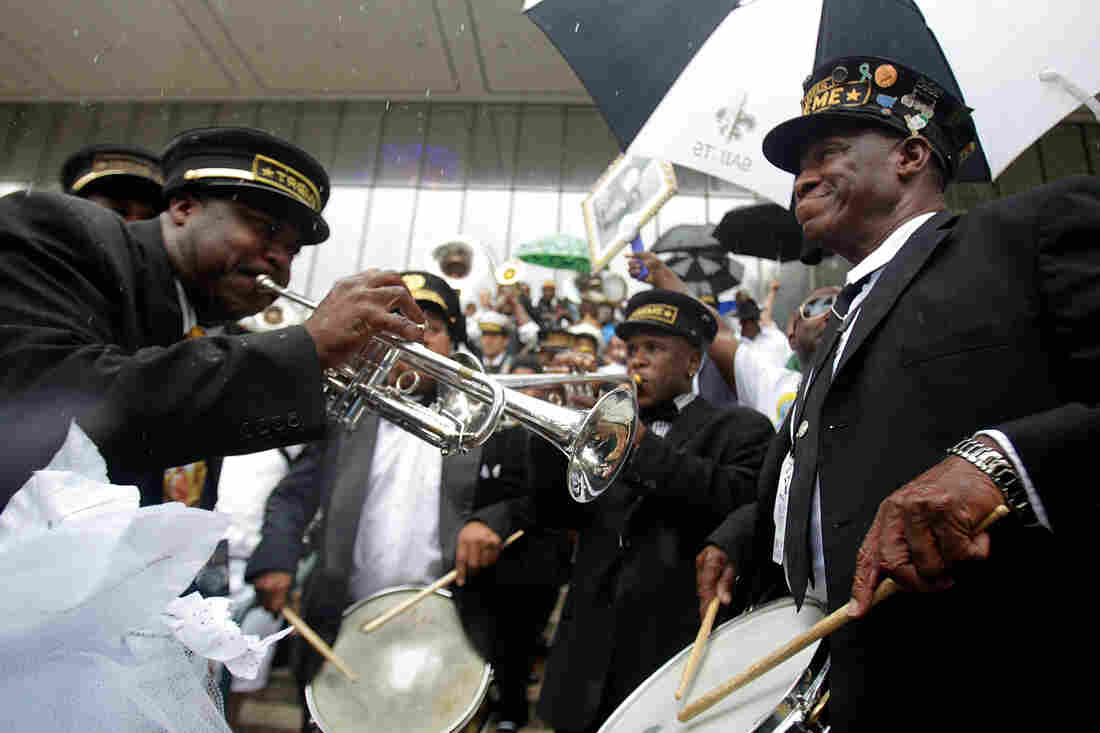 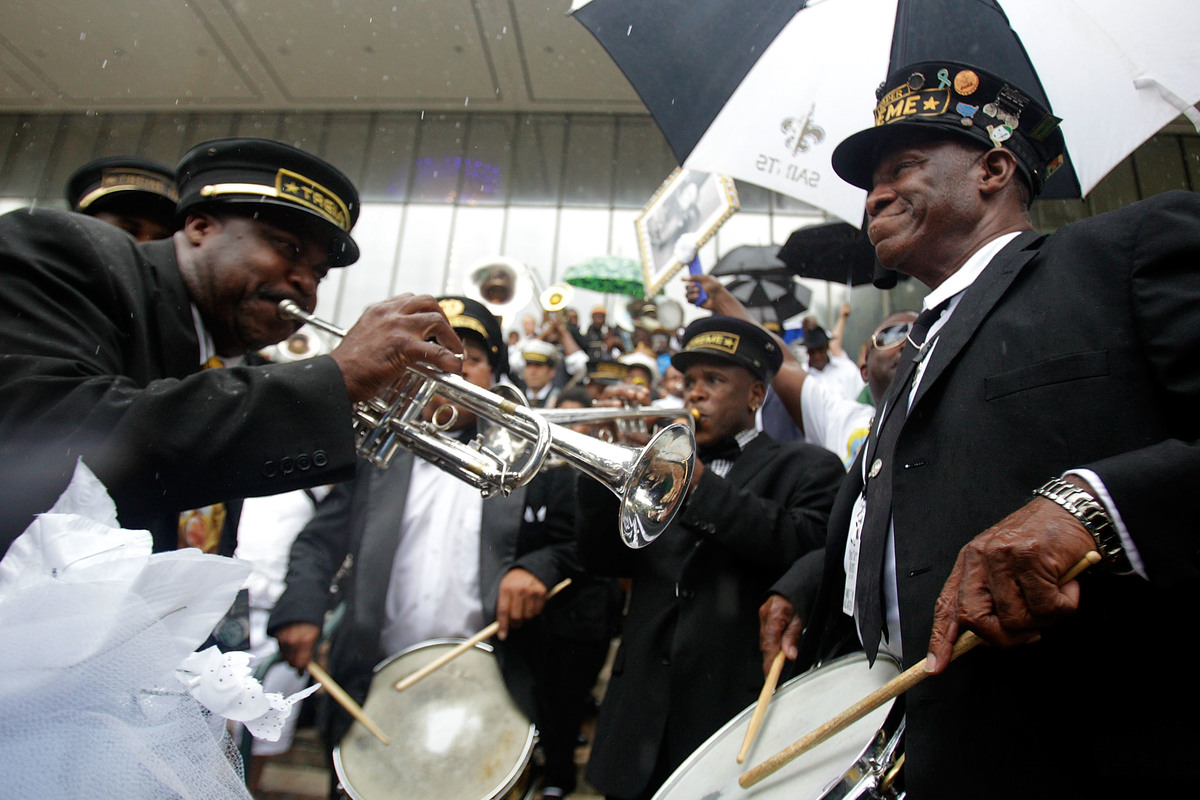 Members of the Treme Brass Band play a jazz funeral for their bass drummer, Lionel Batiste, in New Orleans.

A Blog Supreme was a jazz thing published by NPR Music from May 2009 through September 2016. It presented news, features, aggregated content, historical primers, opinion and analysis, recommendations and other types of music journalism. It was twice named the Jazz Journalists Association Blog of the Year.

It was founded and edited by Patrick Jarenwattananon, who was also its chief writer and a producer for NPR Music's Jazz Night In America. He had the insight that an entity such as NPR should develop a jazz blog, seeing as how blogging was a popular vehicle for music journalism, and that public media has historically supported jazz robustly. He wanted to hire a more experienced journalist to run it but was told that wasn't likely, and to pilot something himself. He was 23 years old at the time.

He was about as naïve as you would assume a human of that age would be, though he grew a lot in the role, in part through writing regrettable things for public consumption in the absence of established guidelines. He was given no dearth of opportunities to read about, listen to and speak with jazz musicians; he still wishes he had seized and realized more of these opportunities. He was driven by the desire to bring an underserved field of art he loves to wider attention through the Internet, a medium he grew up with but one which many of jazz's practitioners and existing storytellers didn't.

A Blog Supreme ceased publication when the position of jazz producer at NPR Music was eliminated. Friday was his last day.

A Blog Supreme initially aimed to publish daily. It took contributions from other NPR and member station staff, though its tone was often filtered through one man's editorial perspective. Its early efforts reflect the types of media coming into being at the time, and the first-person narrative strategies enabled by the Internet. Its early experimental multitudes, successful or not, are important to its story.

Over time, as the media landscape and NPR's digital strategy changed, A Blog Supreme published less regularly and more selectively, becoming a general repository for original stories. Coincident with this was the emergence of Jazz Night In America, a new radio and web video program.

The blog published a lot of different types of stuff. It got nerdy and/or deep about listening. It posted questions to the audience and invited comments back when you could do that meaningfully on the Internet. It ran a recurring instant messenger conversation between the editor and his boss about great historical recordings and a self-explanatory series called "Meet The Jazz Audience." It hosted chats between its editor and WBGO's Josh Jackson, a New Orleans native, about the music on the HBO show Treme; for their efforts, they were invited to record secondary audio commentary for the DVD box sets of the first two seasons. (They also went to the New Orleans Jazz and Heritage Festival in 2011.) It got away with a gonzo travelogue about going to North Carolina to see a Wayne Shorter concert. It aggregated a whole lot of stuff and responded to it.

It listened to rap with Robert Glasper, but also asked Glasper's high school band director about what he was like as a teenager. It ran more straightforward interviews with Chick Corea and Bunky Green. It asked other young Internet people to introduce other people to modern jazz in an attempt to seed a canon of the '00s or thereabouts. It ran a recurring feature called Take Five, a five-song primer on different facets of the music — an artist, a style, an instrument or another category. It welcomed contributions from jazz member stations like WBGO, WDUQ, KPLU (now KNKX), KMHD and WFIU.

It wrote up news: calling musicians when they won grants, major competitions or prizes. It also remembered them when they died. It featured work from NPR colleagues Felix Contreras, Lars Gotrich, Walter Ray Watson and more. It even flirted with hot takes on things like white privilege in black music and why rap music is important to the modern jazz listener. Its editor stands by these pieces but feels kind of dirty about having been baited into polemics, given his unease with becoming a public opinion-haver.

It also published lighter fare of various sorts — the occasional dumb listicle, or Bitches-Brew-branded beer tasting session, or photos of food. It could be "as serious as your life," as writer Val Wilmer once titled a book; it couldn't be that all the time.

Many other writers contributed in many other ways. For example, A Blog Supreme and NPR Music hosted the comprehensive, annual, year-end poll of jazz journalists conducted by Francis Davis in 2013, 2014 and 2015.

On many other occasions, freelance journalists contributed original feature stories. Here is an incomplete list:

A Blog Supreme was not the only thing its editor did at NPR Music.

In collaboration with member station WBGO, he helped facilitate over 50 audio and eventually video webcasts live at the Village Vanguard — arguably the greatest jazz club in the world. He also helped make broadcasts and recordings from 92Y Tribeca and Berklee College of Music, the Newport Jazz Festival, Blue Note Records' 75th anniversary concert, the 2016 NEA Jazz Masters Tribute Concert and the 2011 Monterey Jazz Festival (with KUSP and freelance writer Pamela Espeland). He spent a lot of late nights at a computer to serve short attention spans and long tails.

He often brought in jazz artists for Tiny Desk Concerts and Field Recordings. He wrote about jazz recordings for NPR Music's year-end coverage, First Listen record descriptions, and assorted other features. He made behind-the-scenes contributions to interviews of musicians heard on NPR's national radio newsmagazines, and occasionally appeared on air himself.

He did a number of other things that were not jazz that helped to create and sustain the greater operations of NPR Music itself. He is even embarrassingly captured on certain NPR Internet motion picture properties but won't divulge where exactly.

In 2014, he helped to launch Jazz Night In America in partnership with WBGO and Jazz at Lincoln Center. The multimedia enterprise tells stories around concert recordings of great artists of the present day. He served as an editor and web producer and occasionally as a field producer. It will continue to live on NPR Music.

A Blog Supreme's editor was surprised to hear of NPR's decision. Certainly, he was not happy about it. However, he remains deeply grateful to NPR Music for providing him ample opportunities, and for its commitment to music and musicians.

He is guardedly optimistic about the future of, well, something.

"Jazz today certainly has deep structural issues," he said in a recent interview with himself. "They really boil down to audience, which affects the ways the music is presented, recorded, marketed, taught and created. Inconveniently, if you pursue any of these leads too heavily, you run into the general incoherence of 'jazz' as a useful frame of thinking.

"But it's got one trump card. The last seven-or-so years of monitoring this field professionally have convinced me that incredible, life-changing music continues to be made regularly, by tremendously insightful musicians. I've seen it over and over. And as long as that happens, at least some of that will come to light, powered by the sheer strength of its quality."

At press time, he was unable to disclose any specifics, but surmised that he might be available to follow up on some of these structural issues and quality musicians in different channels, including other corners of NPR Music.

For now, he thanks his readers for their engagement; his fellow journalists and industry folks for sharing their knowledge; and the musicians, who provided beauty to the world, and their time to him. He is proud that they occasionally trusted him to tell their stories.

He prefers that you recognize this chapter of his work by going out to see a live jazz performance, and encourages you to bring a friend if possible. You might see him there, or somewhere else around the jazz Internet.