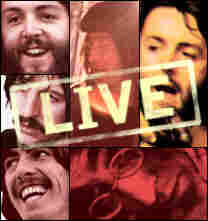 Originally broadcast live on Friday, March 14, 2003 this special edition features music from the lost Beatles tapes. These rare recordings were made during the filming of what became the film "Let it Be." They were stolen more than 30 years ago and remained missing until police recovered them in February 2003. All Songs Considered host Bob Boilen talks about these recordings with Bruce Spizer, author of "The Beatles on Apple Records."

Purchase the Book, 'The Beatles on Apple Records' by Bruce Spizer