Accessibility links
Farewell Tom Terrell : All Songs Considered A friend of mine — and a friend to so many others — passed away. 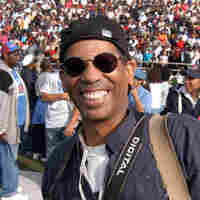 A friend of mine -- and a friend to so many others -- passed away.

I met Tom Terrell so many decades ago, I was in a band, and he was DJing at the 9:30 Club in Washington, D.C.
His love of music spanned a world of tastes. Recently, Tom was writing for NPR: wonderful bits of personal thoughts, eloquent and funny essays, like the time he and his friends went to see Yes. Back in their early days, you didn't see many black folks at a Yes concert. You can hear his essay here.
Tom managed the band Steel Pulse and was a terrific reggae DJ on WHFS, as well as an inspired music journalist and publicist. He loved to spread to the word about all music great and small. I will miss his smile and his positive force -- oh, and that wonderful, wonderful voice.

---------------------------------------------------------------
I never once spent time with Tom Terrell that I did not feel better for having been in his company. He was bright as a whip, funny as hell, and able to communicate his deep love for and knowledge of music to people from all walks of life. And whenever life or the biz were getting me down, he would grin and say in that gorgeous, radio-ready voice, "...but you're Christina Roden!" in a tone that had me convinced that this actually meant something, if only to him, which was more than enough. This was typical of his unstinting professional generosity and solidarity. You see, we were in the trenches together and we had each other's "back." I'll always miss him.
Christina Roden
Journalist, Producer, Publicist

Tom Terrell was a lovely human being with a huge smile and a warm hug. His love of music was deep and infectious, and he used his prodigious knowledge and great writing skills to spread the word to people far and wide. He was much loved in the music community and will be sorely missed.
Tina Pelikan
ECM Records

-----------------------------------------------------------------
I have this picture in my mind of the original long bowling-alley bar at dc space, way before we smashed through the wall to the barber shop that became the back bar, way before new wave and punk rock made its way to the loft (and nearly brought the ceiling down) when dc space was only open for lunch unless there was an avant-garde jazz concert or a performance art piece on a Friday or Saturday night, and that odd mix that inhabited our "cosmic neighborhood" bar is swilling down Harp lager or Whitbread Ale and there sits Tom Terrell, laughing and smiling and talking with everyone.
Michael Barron
friend, guitarist (Tiny Desk Unit)