Accessibility links
Weezer Reconsidered : All Songs Considered Here's an advantage I have over the rest of you: I've never heard Weezer. Apart from knowing that they were wildly popular in the '90s, I couldn't tell you a thing about them.

Here's an advantage I have over the rest of you: I've never heard Weezer. Apart from knowing that they were wildly popular in the '90s, I couldn't tell you a thing about them.

This fact made me the target of relentless hazing by the other music producers here at NPR earlier this year, when Stephen Thompson made some reference to Weezer that I didn't catch. This was immediately followed by a chorus of incredulous jabs over how, exactly, I could have possibly avoided hearing this band.

Here's how: I never listened to the radio, I didn't own a TV and none of my friends listened to Weezer. I also spent a good chunk of the '90s living abroad, so I was completely detached from American pop culture for several years. 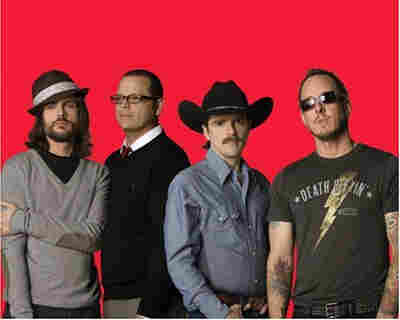 After everyone at work jumped on me for being so clueless, my girlfriend took pity and loaned me her essential collection of Weezer CDs to study, including the Blue and Green albums, Pinkerton and Maladroit.

I'm embarrassed to say they've been sitting here on my desk for several months now and I still haven't listened.

Now Weezer has a new CD — their first in three years. From what I've been reading, a lot of long-time fans of the band think it's "a huge disappointment" or "the worst Weezer album ever." (Check out Amazon customer reviews or Metacritic.com). Of course, this happens all the time with bands that have been around a while. How many times have you heard someone say "I love (band name), but only their early stuff"?

It occurred to me that this was the perfect time to discover Weezer. Having no context at all for hearing the new album, I could listen as though they were some completely new band I was just discovering for the first time. I'm like that guy who emerges from a forest after hiding out for 60 years because he thinks there's still a war going on and he doesn't recognize anything in the modern world.

Okay, maybe not quite like that. But I've spent the past couple of days listening to Weezer's Red Album over and over and have come to one immutable conclusion: it's really good! Seriously, people. This is a great album. From the opening notes to the opening track, to the last note of the last track, I just loved it. Every song on the album is ridiculously infectious. The opener, "Troublemaker" has been banging around in my head all week and I seem powerless to stop it.

I was particularly surprised by how... surprising The Red Album is, from the deftly orchestrated choral part on "The Greatest Man that Ever Lived," to the "Sympathy-for-the-Devil" hoots on "Everybody Get Dangerous" and all the intermittent synth flourishes and crunchy guitar hooks. It really left me wanting more.

If I had one criticism of the Red Album, it'd be that it's all a little too perfect. It's so perfectly produced and so perfectly performed and polished that it felt, at times, a little soulless.

Anyway, it all makes me want to go back and hear the older Weezer albums. It also makes me wonder how many late-in-their-career albums I've dismissed by my favorite bands. Maybe I should give them a second chance, too.