Accessibility links
A Secret Identity Revealed, The 'Footloose' Soundtrack Stripped Bare, More : All Songs Considered The secret identity of the electronic artist known as Podington Bear has been blown. We've also got music from the gentle-voiced singer, Doveman, Tilly and the Wall, Teddy Thompson and more. 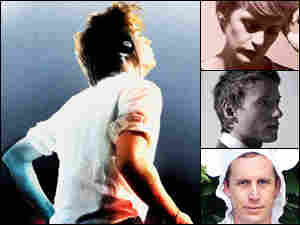 The electronic artist known as Podington Bear spent all of 2007 releasing three new songs a week via a podcast. Podington Bear's real identity was a closely guarded secret. But that secret was recently blown when Hush records released a new box set of Podington Bear's music. Hear how it happened. We've also got music from the gentle-voiced singer, Doveman. He turns the dance-pop song "Let's Hear It For The Boy," from the Footloose soundtrack, into a slow dirge. The Nebraska band Tilly and The Wall returns with a new album featuring more tap dancing rhythms. They sound just as fresh and inventive as ever. Also on the show: a baroque viola piece, Teddy Thompson, the gifted son of Richard and Linda Thompson, Swedish singer Sarah Assbring, also known as El Perro Del Mar, and a nearly flawless new album from Germany's 20-year rock veterans, The Notwist.

Tilly and the Wall

Turning the Gun on Myself

Let's Hear it For the Boy

Glory to the World