Accessibility links
Sneak Previews: Of Montreal, Okkervil River : All Songs Considered We'll soon begin making a list of the year's best albums. Okkervil River and Of Montreal are back. Also, Steve Earle and Gillian Welch, Jeff Hanson, The Walkmen and The Broken West. 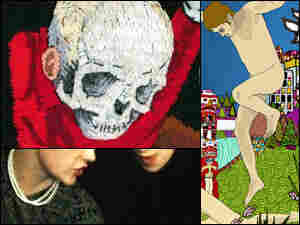 With fall rapidly approaching, we'll soon begin making a list of the year's best albums. Two bands from last year's top-20 are back in the running again for this year: Okkervil River and Of Montreal. We've got a sneak preview of new music from both bands. Also on the show: Steve Earle and Gillian Welch offer songs from their performances at this year's Newport Folk Festival; Jeff Hanson sings with an improbable, but stunning voice on his new album, Madam Owl; New York-based The Walkmen have a beautiful, airy new CD that's both timeless and modern; and The Broken West is about to release one of the year's standout albums — their sophomore release — called Now or Heaven.

Throw Me a Rope

This is a live concert recording and not available for purchase.

If Only It Were True

If Only It Were True