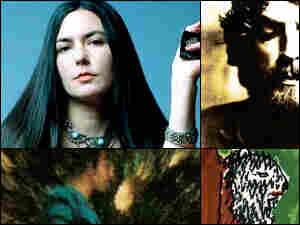 The hypnotic Canadian rock trio Land of Talk is about to release its debut full-length CD; we've got a sneak preview. For some, the first recordings of Creedence Clearwater Revival were flat, but newly-mixed versions of the albums let fans hear the band's music in rich fidelity. Hear "Born On A Bayou," from the reissued Bayou Country. Jesus H Christ and the Four Hornsmen of the Apocalypse make music that's irreverent to some, but hilarious to others. The band's new CD is Happier Than You. Also on the show: new music from Jesse Sykes, Ray LaMontagne and the remarkable electric mandolin playing of India's U. Shrinivas.

The Man Who Breaks Things

Jesus H Christ and The Four Hornsmen of the Apocalypse

Born on the Bayou