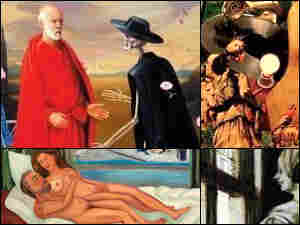 Paul McCartney is about to release a new album he recorded with bassist and producer Martin Glover, a.k.a. Youth. Calling their project The Fireman, McCartney and Youth have put together an inspired mix of vocal pop and rock songs called Electric Arguments. It's due out in November, but we've got a sneak preview of it for you. Also on the show: Oasis is back with one of its best albums in years; Hear the song "To Be Where There's Life" from the CD Dig Out Your Soul. Simon Bookish is the performance and recording name of London-based composer Leo Chadburn. His music is part David Bowie, part Philip Glass. Hear a cut from his new album Everything/Everything. We've also got music for you from the Australia-based instrumental project Bombazine Black, a collaboration with singer Amy Rigby and '70s pop artist Wreckless Eric, Nashville's artful, Americana rock group Lambchop, and new music from Vic Chesnutt with Elf Power and the Amorphous Strums.

To Be Where There's Life

The Sun Will Set

This song was performed and improvised by All Songs Considered host Bob Boilen using Brian Eno's 'Bloom' software for the iPhone and iPod touch.