Accessibility links
Vinyl: The New CD? : All Songs Considered I recently did something I haven't done in more than 20 years: I put on a record — an actual vinyl LP — and just listened to it. The album was Bon Iver's For Emma, Forever Ago. I had mail-ordered the record, and when I found it waiting for

I recently did something I haven't done in more than 20 years: I put on a record -- an actual vinyl LP -- and just listened to it. The album was Bon Iver's For Emma, Forever Ago. I had mail-ordered the record, and when I found it waiting for me on my front porch one evening after work, I decided to make it the night's entertainment.

With no television and no other distractions, I just sat there and listened. But while I listened, I held the dust jacket and used the time to really consider and appreciate the artwork. I studied the lyrics and read all the liner notes. What a novelty.

A while back on the blog, I mentioned that I had gotten rid of all my CDs because I thought the compact disc was a dying format. It's so much easier to access everything from a hard drive. When I asked listeners what they thought would be the music format to replace CDs, a handful of people said "vinyl." I thought it was funny, but I've come to realize that they may be right.

I've read a number of reports that sales of vinyl LPs and turntables are way up. Retailers speculate the obvious: Vinyl turns music into a tangible work of art, allowing a deeper connection between listener and artist. And many vinyl LPs now come with a code to download a free MP3 version of the album, giving listeners both the convenience of digital audio and the beauty of art you can hold in your hand.

Vinyl could save not only music as high art, but also the music industry itself. Labels and music retailers, reeling from years of plummeting sales, have been trying to lure buyers into purchasing physical CDs instead of downloads. Some have included videos or bonus tracks with the discs. But vinyl is a perfect excuse for returning to an actual, physical record store, where you can lay down some money and walk out with something real. I'd love to see local record stores come back.

Some bands see the potential, too. This fall, Of Montreal released multiple versions of its latest album on vinyl (with the free download code). The different versions include extra treats like wall art, buttons, a T-shirt and a paper lantern. The artwork on both the cover and album folds is simply stunning. It would seem almost criminal to shrink it down to the size of a CD booklet or to turn it into a tiny icon for a computer.

Of Montreal's irresistible vinyl release finally convinced me to start collecting physical LPs. I dusted off my turntable and started hunting down some of my favorite recordings on vinyl. So far, I've acquired a total of... eight records. 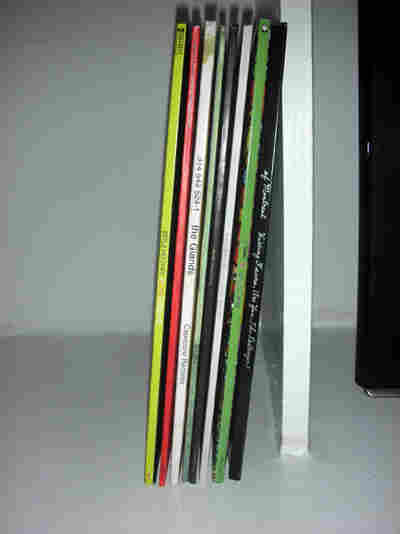 I asked around the office. All of the NPR Music producers copped to owning hundreds of LPs, but only one of them (Lars Gotrich) still actively buys vinyl.

What does your vinyl collection look like? E-mail us a photo of it; we'll post some of them here on the site.