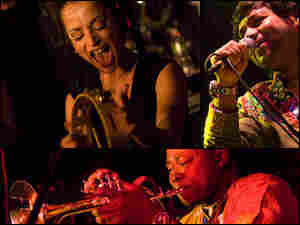 For the past six years, New York City has been host to the brief but intense annual world music festival known as GlobalFEST. This year, All Songs Considered host Bob Boilen attended the one-night event, featuring a dozen bands on three different stages. It was a stunning mix of music: an electronica band from Marsailles, a Qawwali band from Brooklyn, an Inuit throat singer raised near the magnetic North Pole, a bagpiper from Iran, and much more. On this edition of All Songs Considered Bob Boilen looks back at highlights from the festival with Banning Eyre, host of Afropop, and Rob Weisberg, host of a weekly world music show on WFMU in New Jersey called Trans Pacific Sound Paradise.

Photos of the festival, from Jon Vachon and WNYC

Songs featured on this episode of All Songs Considered were recorded live at GlobalFEST and are not available on any CDs or albums.