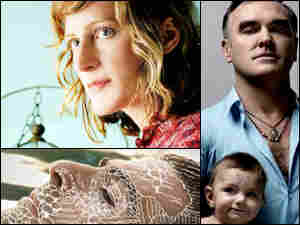 Laura Gibson is a shy, soft-spoken singer based in Portland, Ore., who is about to release one of the year's most breathtaking albums. Beasts of Seasons is a quiet masterpiece, with gorgeous songs that have roots in traditional folk, but always take the lesser-worn paths leading in unexpected directions. We'll preview the entire album beginning at 11:59 p.m. ET Feb. 16. You can also hear a preview on this edition of All Songs Considered, with the song "Spirited." Also on the program: new music from Lily Allen and Morrissey, hip-hop troubadour K'naan, a Sufjan Stevens remix, actor Jason Schwartzman's solo project Coconut Records, and an eerily beautiful new album from The Antlers.

Something Is Squeezing My Skull