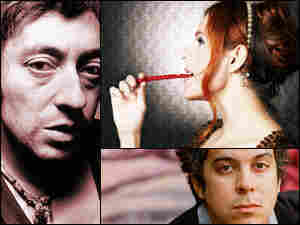 It's been more than 40 years since Serge Gainsbourg, France's "dirty old man of pop" music, released his controversial album Histoire de Melody Nelson. Now, for the first time ever, it's about to be released in the U.S. Hear a cut on this edition of All Songs Considered.

When Neko Case toured in support of 2006's Fox Confessor Brings the Flood, she claimed that she didn't like love songs, and that she was incapable of writing one. But on her sixth studio album, due out March 3, Case offers up what she calls "a bunch of love songs," which are heartbreakingly beautiful and, at times, comical. We've got a sneak preview of Middle Cyclone on this edition of All Songs Considered. You can also hear the entire album, beginning at midnight, Feb. 23 as part of our First Listen Series. Also on this edition: M. Ward offers a solo acoustic performance of a song from his new album, Hold Time; great unknown folk singer Jesse Marchant; a swaggering new recording from Scotland's Franz Ferdinand, and Brooklyn duo Bishop Allen.

Note: This is a live, solo recording of M. Ward performing "Never Had Nobody Like You." The studio version is available on his new CD, Hold Time.

The Ancient Commonsense of Things

You can hear the entire M. Ward performance from WNYC here.