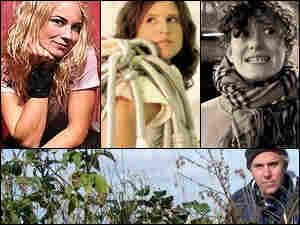 You can click here to listen to The Austin 100: A SXSW Mix, and click here to download a free 10-song sampler of artists NPR Music is presenting at SXSW.

NPR Music and All Songs Considered will be in Austin, Tex. this week, blogging, broadcasting and webcasting nearly a dozen live concerts from some of the year's most exciting bands, at this year's South by Southwest festival. You'll hear The Decemberists debut their entire new album, The Hazards of Love, along with performances by K'Naan, The Heartless Bastards and many more, all webcast live on NPR.org.

On this edition of All Songs Considered host Bob Boilen chats with NPR Monitor Mix blogger Carrie Brownstein, producer and Second Stage host Robin Hilton, and Song of the Day editor Stephen Thompson about some of the bands they're most looking forward to seeing at this year's South by Southwest festival in Austin, Tex. Hear music from some great unknown bands, like Sgt. Dunbar and the Hobo Banned, Passion Pit, and The Weird Weeds, plus Jason Lytle of Grandaddy, Mirah, and Ponytail.

Sgt. Dunbar and the Hobo Banned

Yours Truly, The Commuter

This album will be released on May 19th and is not yet available.

Tell Me It Ain't So

Celebrate the Body Electric (It Came from an Angel)