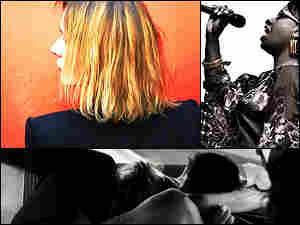 It's hard to believe, but in a career spanning five decades, Bob Dylan has released more than 30 studio albums, and dozens of other live recordings and compilations. Later this month he'll release his 33rd studio disc, and based on our early listen, it's going to be stunning. On this edition of All Songs Considered we've got a preview of the new Dylan record, Together Through Life, with the song "Beyond Here Lies Nothing." Also on the program: a new, self-released single from Sam Phillips, singer Jill Sobule, Malian duo Amadou and Mariam, solo music from The Knife's Karin Dreijer Andersson, a collaboration between Orenda Fink and Scaleplist, and an exclusive live cut from Grizzly Bear's recent South by Southwest performance.

Beyond Here Lies Nothing

A Piece of My Brightside

This is a live concert recording and not available on any album. However, you can get a studio version of the song on the new Grizzly Bear album 'Veckatimest.'