Accessibility links
The Worst 1:45 Of Bob's Life : All Songs Considered This morning, NPR Music producer Stephen Thompson and I were having our regular weekly debrief about American Idol, rating and reviewing the previous evening's performances. Our most heated and frequent debate centers on contestant Adam Lamb

This morning, NPR Music producer Stephen Thompson and I were having our regular weekly debrief about American Idol, rating and reviewing the previous evening's performances. Our most heated and frequent debate centers on contestant Adam Lambert, a singer whose voice, according to Stephen, is an "adenoidal screech" that bores into Stephen's skull. [Editor's Note: I believe the exact words were "an adenoidal screech that bores into my right temple like 9,000 dentist drills made of knives and fire." --ST] I, and everyone else with a finely tuned ear for seasoned perfection, thinks Lambert is the best singer on the program -- and, quite possibly, the most talented singer who's ever appeared in American Idol's eight-season run.

At some point during this morning's debate, Bob chimed in to ask for a video link of Adam Lambert's performance from last night: 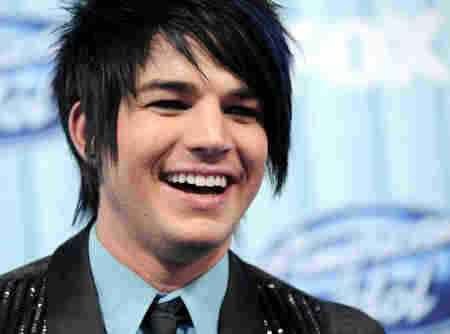 Adam Lambert, one of this year's contestants on American Idol. (Credit: AP)

Bob has a gift for staying blissfully clueless about this sort of thing. About two seconds into the video clip, he took off his headphones and tried to beg out of watching, but I made him sit through the whole thing -- an exercise Bob later described as "the worst minute and 45 seconds" of his life. It also sparked this exchange:

Bob: So, did Adam Lambert write that?
Robin: No. He credits someone else at the end with that arrangement.
Bob: No, I mean did he write that song?
Robin: [Face in hands.] That's The Bee Gees, Bob. [Singing.] "If I can't have you, I don't want nobody, baby! If I can't have you! Ahhh-ahh!"
Bob: Never heard of it.
Robin: It's from the '70s. It's disco. Your generation gave us this music.
Bob: And I offer my deepest apologies.

Oh, Bob. So, what do you think? Do you watch American Idol? Is it mindless pop dreck, innocent entertainment, or a showcase for remarkable talent or some combination thereof? And if you do watch, what do you think of Adam Lambert?