Accessibility links
A Music Geek's Prayers Answered : All Songs Considered Hear Dark Night of the Soul in its entirety.

Hear Dark Night of the Soul in its entirety.

None of us at NPR Music were sure what, exactly, Dark Night of the Soul (not to be confused with the recent benefit compilation Dark Was the Night) was when we first started hearing about it back in March. Was it a movie, or an album, or some combination of the two? And who was behind it? One thing we knew: The artists associated with the mysterious project were so closely aligned with my own tastes, some of the producers here joked that I was secretly the producer behind it all. 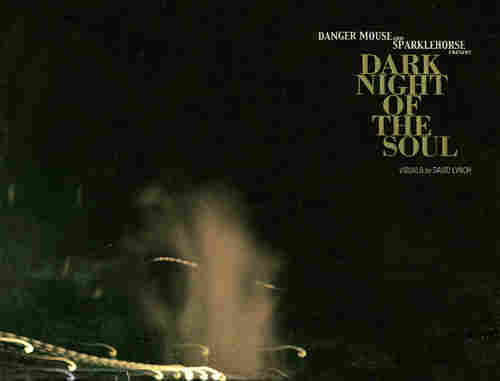 Cover art for 'Dark Night of the Soul.' Can you see the face?

Admittedly, it sounded like a dream project to me. Some of the musicians we knew were involved with Dark Night: Danger Mouse, Sparklehorse, Vic Chesnutt, Jason Lytle, The Flaming Lips, Scott Spillane of Neutral Milk Hotel, James Mercer of The Shins, Suzanne Vega. The list went on and on. And director David Lynch was somehow involved. Whatever Dark Night of the Soul was, it sounded too cool and too good to be true.

We now know that Dark Night of the Soul is an album. It's been the most closely guarded release of 2009, and one fans like me have been anticipating for ages. Rumors of a project like Dark Night first surfaced three years ago, when Danger Mouse helped produce the 2006 Sparklehorse record Dreamt for Light Years in the Belly of a Mountain.

When you're one of the most hyped, anticipated and mysterious albums of the year, you'd better be damn good, and Dark Night of the Soul is. It lives up to all the expectations you'd have, given a lineup of talent like the one behind it.

Here's the one drag: Dark Night Of The Soul was originally supposed to be released with a book of strange photos by director David Lynch. But now it looks like the album may never come out at all. An unnamed spokesperson for Danger Mouse says that "due to an ongoing dispute with EMI" the book of photographs will "now come with a blank, recordable CD-R. All copies will be clearly labeled: 'For legal reasons, enclosed CD-R contains no music. Use it as you will.'"

You can order the book, sans music, from the official Dark Night Of The Soul Web site.

In the meantime, you can hear the whole thing, for free, here on NPR Music. A huge thanks to Danger Mouse, Sparklehorse, David Lynch and everyone else behind the project for making this possible.

Let us know what you think of the music.