Accessibility links
Daniel Johnston's Weird World Now An iPhone Game : All Songs Considered Daniel Johnston has an iPhone game. Johnston probably doesn't even know what an iPhone is. But this might be the best entry point for the difficult, yet fascinating musician.

Daniel Johnston has an iPhone game. Johnston probably doesn't even know what an iPhone is. The bipolar singer-songwriter and visual artist has always had a different view on life and it shows through brilliantly on this game. Let's take a look at the trailer for Hi, How Are You, shall we?

Yep, pretty great. Weird Johnston creatures, yearningly joyful soundtrack (all his songs, of course), 3D cell-shaded platform (whatever that is) and tilt controls. Admittedly, I'm not much of a gamer; my latest system was a Super NES and my favorite video game of all time is Myst. But the more I fool around with my iPod Touch, the more I download quirky puzzle games and existential role-players. Hi, How Are You actually straddles both -- it's a weird religious battle disguised as an addictive puzzler. 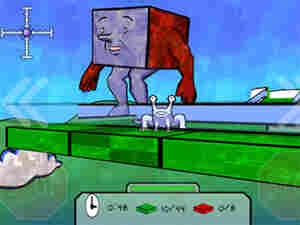 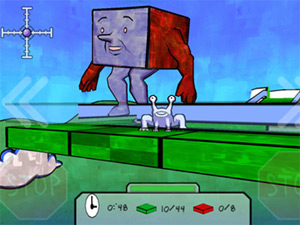 Hi, How Are You features all the delightfully weird creatures that Daniel Johnston has developed over the years. (DrFunFun, LLC)

Johnston did actually take part in the creation of the game. The developers, Peter Franco and Steve Broumly, are clearly fans who took his musical and narrative ideas to heart. Playing inside Hi, How Are You is like entering Johnston's beautifully strange world. You battle the devil as a frog who becomes a man-child to rescue a girl. For Johnston newcomers, it's a concept that's frankly unsettling, yet ultimately endearing onscreen.

That unsettled quality is what Johnston apologists have come up against again and again, and fans have continually found new ways to reveal Johnston's genius. There's an excellent tribute album (The Late Great Daniel Johnston featuring Vic Chesnutt, Clem Snide, Beck and more), an award-winning documentary (The Devil and Daniel Johnston) and numerous books filled with his art. Most famously, Kurt Cobain frequently wore Johnston's signature "Hi, How Are You?" frog T-shirt.

But like the explosive success of The Beatles Rock Band and Guitar Hero, Hi, How Are You might be the best Daniel Johnston entry point of all. The player is fully immersed in all the aspects of Johnston that make him a difficult yet fascinating artist. My only complaint is that it only contains three songs. (Can we get an app update with more, perhaps?) There are many other artists with signature mascots and world visions out there ready for the interactive medium; which should be introduced via video game next? My vote goes to Eddie the Head of Iron Maiden fame.