Accessibility links
Fans Weep Openly At Alex Chilton Memorial Show : All Songs Considered Most of the musicians that played the tribute show are used to putting emotion into song, but Jody Stephens took the crowd even deeper when he broke from verse and chorus, stepped up to the microphone and, in a choked voice told the crowd, "You've... 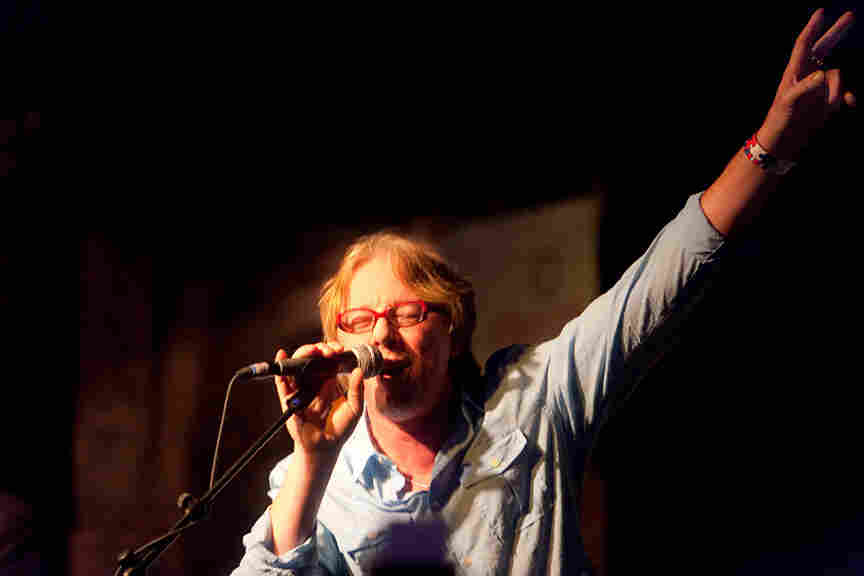 Last week, many music fans were shaping their SXSW plans around seminal pop band Big Star's show at Antone's on Saturday night. It was to be a celebration of a group with a difficult past and a short but beloved catalog of songs, many of which were written by the talented Alex Chilton.

Chilton died Wednesday, on SXSW's opening day, and Big Star's performance three days later turned into a memorial concert. Many wept around me as I listened to one great pop song after another being played by the group's drummer, Jody Stephens, with guitarist Jon Auer and bassist Ken Stringfellow (both of The Posies) and a revolving cast of guests, including original Big Star bassist Andy Hummel.

Watch them play a bit of "Back of a Car":

Chris Stamey played "I Am the Cosmos" by the other too-soon-departed member of Big Star, Chris Bell. R.E.M.'s Mike Mills sang "Jesus Christ":

And John Doe played "I'm in Love With a Girl." My favorite was the version of "September Gurls" that Hummel played, joined by Susan Cowsill, Amy Speace and The Watson Twins.

Most of the musicians who played the tribute show are used to putting emotion into songs, but Jody Stephens took the crowd even deeper when he broke from the verse and chorus, stepped up to the microphone and, in a choked voice, told the crowd, "I owe him a lot. I learned a lot from him. You've wrapped your arms around us. We appreciate it." It was a fitting tribute for an artist who influenced so many.

You can read an appreciation of Chilton at Carrie Brownstein's Monitor Mix blog, and hear Fresh Air's interviews from 1991 and 2000 with the musician, here.

Even though Alex left this world way too soon, I feel so fortunate to have been his friend and wife. I would like to say a few things about his relationship with music and also speak of what he was about as a person. He was an individual who did what he pleased. However, he was also the most considerate and sincere person I've ever known. He loved life and people and usually befriended the underdogs. He saw beauty in what other people would just dismiss; old rickety-houses about to fall down- he would say, "now that's a great house worth buying." He would spend 10 minutes chatting with a homeless person on the street and always helped them out with some money. He was a good listener and was very compassionate. He was extremely generous, always giving time, energy and money to his friends with a no strings attached attitude.

There is one aspect to his personality that seemed to define how he approached and interpreted life and that is a consistent tendency to be absolutely clear in expression and communication. His mind worked analytically; he had a low tolerance level for vagueness and carelessness. His relationship with music was all about analysis. When listening and appreciating a piece of music, whether it be a Beach Boys tune or a Bach partita, he was able to pay attention to individual elements simultaneously; harmony, rhythm, melody, meter, etc.

I believe this is why he loved working in the studio producing records. He spoke a lot about John Fry (Founder of Ardent Studios) teaching him how to do work in the studio and how he enjoyed playing around with the different elements. The one thing he was absolutely proud of was producing The Cramps records. He would play them at home and just talk and talk about the experience. He was also quite proud of the Detroit garage band The Gories, both his work with them and the band itself. He was very excited for them now that they are playing shows again.

At home in New Orleans Alex lived a simple and relaxed life. He watched a lot of TV while fooling around on the keyboard and guitar. We played music together, both classical and pop. He rode around town on his bike and loved to strike up conversation with whoever he came across. For the past few years, when I lived with him, he listened and played classical Baroque music, Scott Joplin rag tunes and '60s pop music. Names that often came up include the following: Carole King, Petula Clark, Brian Wilson, The Byrds, Frederick Knight, the band Free, George Frideric Handel, Georges Muffat, Haydn and the baroque performance group Musica Antiqua Koln. There are dozens more but these names come to mind as I'm writing this.

The final point I would like to draw attention to his valued spontaneity. This would seem to contradict his insistence on analysis and accuracy but somehow he managed to be both at the same time. Honestly, this remains a mystery to me and is probably why he has been described as a genius and a musician's musician. I am only speculating on this but I am thinking it is probable. I will miss him forever and will honor him by maintaining and developing what I've learned from him: compassion, spontaneity, honesty, directness, generosity an excellent listener and enthusiasm about what life has to offer. He had a blas?? attitude towards death, it didn't interest him. The same goes for sleep, he just said the other day that he wished he could be awake 24/7, life was too interesting and he didn't want to waste it sleeping. I laughed at that but I knew he was serious.

On that note, I need to end this little essay and go take a nap -- here's what Alex would say: "Night, sug."