Accessibility links
The Pop Artistry Of Justin Bieber, Celestial Choirboy : All Songs Considered A DJ named Nick Pittsinger (a.k.a. Shamantis) recently took "U Smile," a hit by pint-size pop sensation Justin Bieber, and made it eight times slower. The result is astoundingly beautiful. 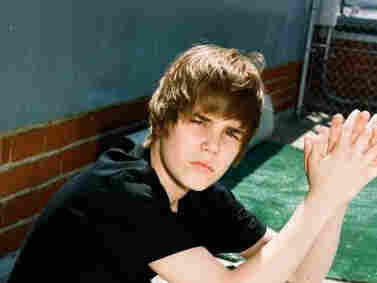 By now -- by which I mean, "in the last few hours, or the equivalent of six pre-Internet news cycles" -- many of you have already heard a 35-minute composition titled, elegantly enough, "U Smile 800 Percent Slower." The concept of the piece couldn't be simpler: A DJ named Nick Pittsinger (a.k.a. Shamantis) took "U Smile," a hit by pint-size pop sensation Justin Bieber, and did nothing to it except make it eight times slower.

[UPDATE: We tested the track in the office, with the aid of electronic-music ace Sami Yenigun, and Pittsinger clearly used a phase vocoder to smooth it out -- it's not merely slowed down. Also, for those who doubt its origins, it's most definitely Bieber.]

[UPDATE TO THE UPDATE: Pittsinger himself wrote us to say, "I didn't use a phase vocoder; I used a program called paulStretch. I think it might have that technology built into it!"]

When I first heard about the idea, I immediately thought slowed-down Bieber might sound like, I don't know, some sort of downtrodden hobo bluesman. But the pitch doesn't change, giving him sort of celestial-choirboy quality, while the music becomes almost ludicrously majestic and beautiful. If I got this record in the mail with the tag ("Recommended If You Like: Sigur Ros, Stars Of The Lid"), I'd immediately rip it to the iTunes folder I've got titled "Music For Editing."

Click here to hear "U Smile 800 Percent Slower" on Soundcloud, and watch the video for the original on YouTube below. Heard side by side, the two versions of the song say a lot about how much artistry and craft go into producing pop music in 2010.