Accessibility links
NPR Music Faces The Man, With An Assist From Lost In The Trees : All Songs Considered When NPR Music staffers were called upon to speak on Capitol Hill, we brought in a ringer: the Tiny Desk Concert veterans in Lost in the Trees, a.k.a. the band Bob wishes to adopt as his chamber-folk foster children. Hear the complete session.

Lost in the Trees: Recorded Live on Capitol Hill

NPR Music Faces The Man, With An Assist From Lost In The Trees

Lost in the Trees: Recorded Live on Capitol Hill 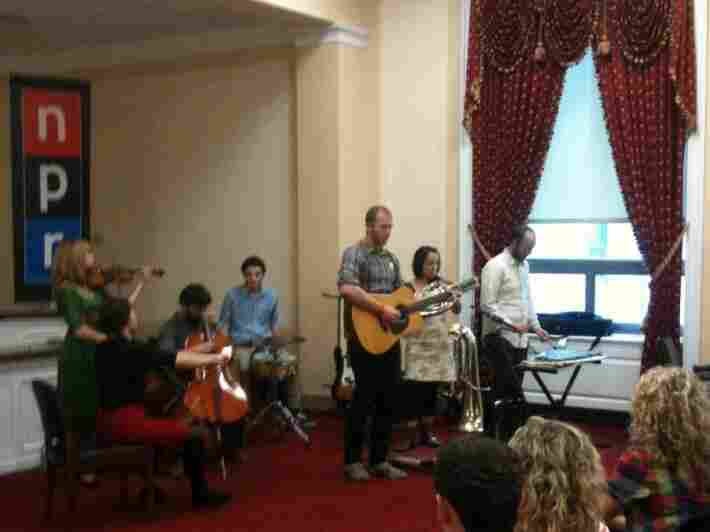 Lost in the Trees sticks it to the man by performing four string-swept folk songs for his amusement. Stephen Thompson/NPR hide caption

By now, we've no doubt told you all about NPR Music's Tiny Desk Concerts, in which we bring our favorite musicians to perform short sets at Bob Boilen's desk. In the two and a half years we've been at it, we're recorded more than a hundred of them, and they've become a trademark of what NPR Music is all about: a chance to discover (or rediscover) artists we love in a way that's approachable, digestible and even downloadable.

That's part of a larger mission of public radio -- to inform, educate and entertain the public -- and NPR often finds itself explaining that mission to anyone who'll listen, from potential donors to federal and local governments. Which, bizarrely enough, is where I came in recently: Last week, NPR's government-relations department asked our product manager, Amy Schriefer, and me to speak about NPR Music's mission on Capitol Hill in Washington, D.C. Apparently, the kind woman who staffs the NPR hot-dog cart was unavailable to accompany Amy, so they settled for someone with less gravitas.

No matter how many times I'm called upon to speak in front of crowds, I can't help but fret that my speech will be overshadowed by the rapidly spreading stain running down my pant legs. So we called in a ringer: the Tiny Desk veterans in the North Carolina band Lost in the Trees, a.k.a. the band Bob wishes to adopt as his chamber-folk foster children. So after Amy and I finished our PowerPoint presentation -- PowerPoint being the last refuge of the scoundrel -- we turned the proceedings over to one of our favorite new bands of 2010. Lost in the Trees' gorgeous, string-infused music (as also heard and seen in this Tiny Desk Concert) spoke for us better than even Amy could.

So we decided: Why confine the joys of Lost in the Trees' four-song set to a bunch of congressional staffers? This isn't Communist France! What's good enough for Washington fat cats should available to all. So we had our ace Tiny Desk engineer, Kevin Wait, record the performance for posterity -- and for sharing with you, the real public.

As an added bonus, be sure to check out Lost in the Trees' gorgeous new remix of Bon Iver's "Lump Sum." Throw another quarter in the Iver jar and listen to it here.