Accessibility links
Matisyahu: Light A Fire For Hanukkah Music : All Songs Considered Hasidic reggae musician Matisyahu reflects on the lack of Chanukah music in popular culture.  He notes that Amazon.com has 48,322 Christmas albums for sale, but only 212 Chanukah CDs. That's 227 Christmas albums for every one Chanukah album.

Matisyahu is a Hasidic reggae musician living in Brooklyn. This is a special essay he wrote on Hanukkah music. 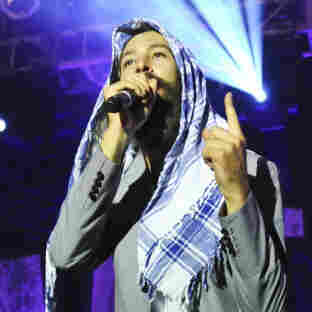 First and foremost, Christians care about holiday music. Jews, not so much. In Christianity, caroling actually matters. It's been a part of Christmas for more than 500 years. The first English Hanukkah song, "I had a little dreidel," is less than 100 years old, and since then, very little else has been produced.

Is it possible Hanukkah doesn't inspire folksy songs? Plot lines may be a part. The Christmas story has a lot of material to work with. There's Jesus and his birth, the wise men, their gifts and tons of frankincense. Then there's Santa, his reindeer, his elves and his drunken escapades over Grandma. Songs that aren't even remotely connected to Christmas are now officially canonized Christmas tunes. "Frosty the Snowman," "Jingle Bells" and "Winter Wonderland" never mention anything religious but are still notches in Christmas' belt of musical dominance.

Hanukkah is a straight linear story. The underdog Jews miraculously defeat the huge Greek army, and the Menorah in the Holy Temple miraculously stays lit for eight days. There's less to draw from, and if it weren't for Adam Sandler, Hanukkah music wouldn't get any radio play at all.

But the real reason Jews don't have more Hanukkah music is that historically, American Jewish singer-songwriters were too busy making Christmas music. "White Christmas," "Rudolph the Red-Nosed Reindeer," "Silver Bells" and "The Christmas Song (Chestnuts Roasting)" were all written by Jews. Both Neil Diamond and Barbra Streisand have their own Christmas albums. The No. 1 best-selling Christmas album of all time is from Kenneth Bruce Gorelick, the Jewish smooth-jazz legend Kenny G. American Jews have always produced a lot of holiday music, just not Hanukkah music.

Jewish musicians might feel more inclined to make Hanukkah music if they knew that someone would actually want to listen to it. Until the holiday music market shows it can support Hanukkah songs, it's highly unlikely that we will ever hear Jewish holiday music at the mall, or the gas station, or the DMV, or on every radio station that Santa currently rules.

Is it possible that one day the tide may turn, that Jews and Christians will come together in the studio and start making Hanukkah music? Will we ever get to hear Drake and Rihanna's hit single, "Hanukkah's Sexy Love Lights"?  Maybe, but it would take a real Hanukkah miracle.