Accessibility links
The 'All Songs' Guide To Embarrassing Green Bay Packers Novelty Songs : All Songs Considered With the Super Bowl upon us, one of NPR Music's several Packers fans rounds up some of the best (or is that the wurst?) musical proclamations of Cheesehead glory. Think rapping wide receivers, Lil Wayne, polka and the Packarena. 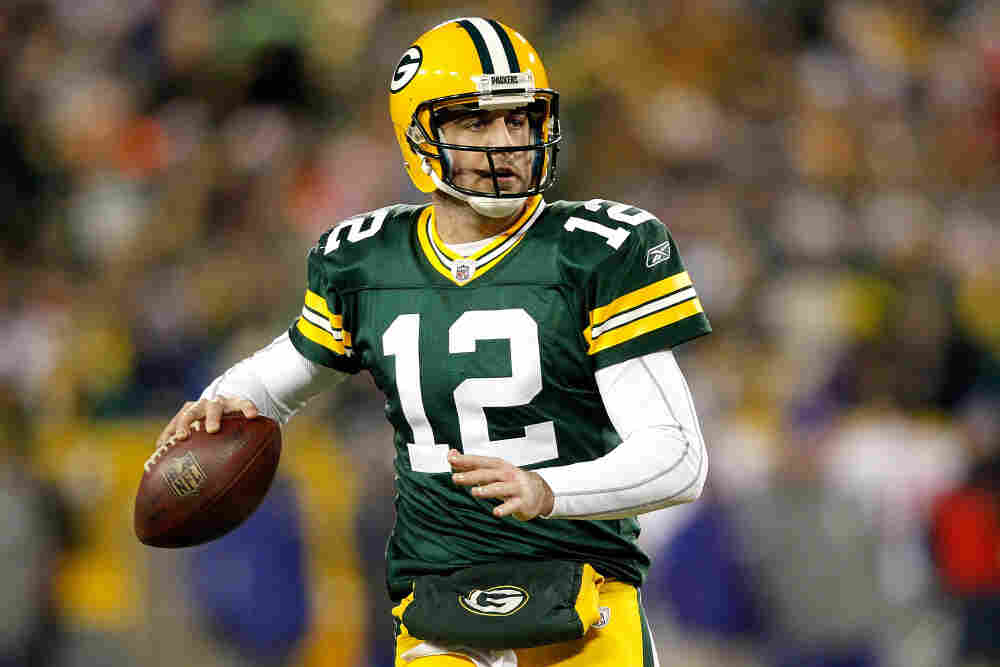 Green Bay Packers quarterback Aaron Rodgers is an amateur musician himself, much like many of his fans. Matthew Stockman/Getty Images hide caption 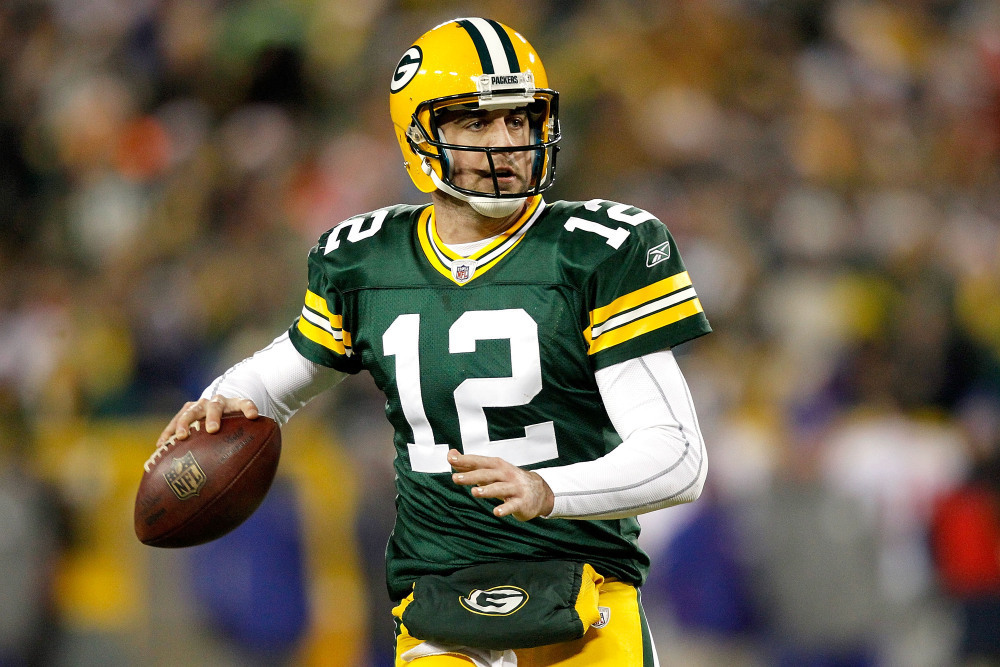 Green Bay Packers quarterback Aaron Rodgers is an amateur musician himself, much like many of his fans.

Greetings, All Songs Considered readers! Patrick Jarenwattananon here; normally I cover jazz at this here site, which makes me the chess-club contingent of the NPR Music middle-school cafeteria, except with more fedoras.

But! As you surely know, this is no normal weekend. It's Super Bowl weekend, and this year, the Green Bay Packers are playing for the title. And I'm proud to say that I grew up playing chess and wearing fedoras in the state of Wisconsin. (At least one part of that assertion is true.) This means that from an early age, I was culturally indoctrinated to support the Packers, and to this day, my state of happiness remains unhealthily dependent on the specific ways in which hefty men wearing yellow spandex knickers run into each other.

Being both a music journalist and a Packers fan, I find myself with a platform to reflect on some of the best, or perhaps worst, Packers novelty songs. As I am currently ensconced in a weekend-long anxiety attack which will swell to a fever pitch on Sunday night, I could sure use some lovably embarrassing music to temporarily deflate the tension for a minute. [UPDATE: Victory!] So:

If you don't pay attention to mainstream pop, that's "Black and Yellow," by the rapper Wiz Khalifa. It is a legitimate hit, reaching as high as No. 3 on the Billboard Hot 100.

Note that the song doesn't itself contain any particular geographical giveaways; abstracted from all context, it functions perfectly well as a haughty, if literally colorful, boast. But once you note that Wiz Khalifa is from Pittsburgh, and black and yellow are the colors of all the Pittsburgh pro sports teams, and that the Steelers are clearly the biggest team in town in any season ... well, the music video can explain the rest.

The success of "Black and Yellow" has inspired no shortage of copycat "remixes," substituting fans' favorite sports-team colors and much more overt boosterism in the lyrics. The Packers' extensive fan base bears no exception; we've taken to YouTube with our own versions of "Green and Yellow." (The Packers' colors are "green and gold," but close enough.) Most of these come from amateur rappers and/or superfans; their creators might be known as Fosforik Uknytie, or Prophetic and Pizzle (my personal favorite), or J-Byrd, who is all of 13.

I invoke the pronoun "we" and the possessive "our" with some distaste, because while I can't, as a Packers fan, disown my brethren, some of these are a bit much. Perhaps the most egregious is by a fellow who identifies himself as Yung Klink; his opening line goes, "You know what it is / Clay Matthews shaking out your quarterback, makes me [starts with j, rhymes with 'fizz']." I don't feel quite as enthusiastic about our star outside linebacker, but to each his own.

Most of these remixes appeared before Jan. 23, when we learned that the Steelers and Packers would meet in the Super Bowl. So it doesn't reflect on us quite so poorly that we would take our opponents' song and butcher it so badly. However, a one Lil Wayne has, as of Thursday, blessed us with his own "Green and Yellow." (Warning: contains some family-unfriendly language.)

It's not the greatest Weezy on record, I'll readily admit. But he does throw a couple clever inversions in there (scoring on Steelers cornerback Ike Taylor, going after Head and Shoulders endorser Troy Polamalu's hair, and so forth). More importantly, it comes from a genuine place; though he grew up in New Orleans and makes this fact known in every other song of his, Lil Wayne is somehow a long-standing Packers fan. Repeat: Lil Wayne is a Packers fan. I don't know about you, but I'm feeling pretty vindicated right now.

The "interpolate a massive hit" stratagem is easier than ever now, with all the various music-making and -sharing technologies available to the average consumer. For example, "Teach Me How to Dougie" has become "Teach Me How to Raji," after the nose tackle's ungainly end-zone celebration in the NFC Championship game. And after the Far*East Movement busted onto the charts with "Like a G6," a group of Madison, Wis., media students created "Fly Like a Cheesehead":

In late 1996, it wasn't quite as easy to record and distribute your own Packers parody, unless you happened to work at a Milwaukee radio station. Back then, the Macarena — you know, the dance hit we'd like to forget — was still in heavy rotation, and the Packers were enjoying one of their best seasons ever. So the morning hosts of 99.1 WMYX decided to make this ditty, bearing the portmanteau "Packarena":

The Packers won the Super Bowl that season, so it can't be all bad. In fact, the station made a remix in 2008, when the Packers were again threatening to go all the way. (They didn't.) And proceeds from sales of "Packarena" singles — yes, cassingles — went to charity. But I imagine lead singer Jane Matenaer didn't anticipate her throwaway joke about cheating with tight end Mark Chmura would have such unsavory resonance a few years later. (Not saying that Chewy can't redeem himself, folks! Just sayin'.)

In any event, special mention must be made of Dos Guyz (sound samples at that link), who take on AC/DC's "TNT" and Dio's "Holy Diver" in order to pay tribute to modern-day heroes Clay Matthews and Donald Driver, respectively. The band calls itself "a creation of brilliant retardation combined with boredom and beer." But as far as that aesthetic goes, one must cede pride of place to the rock-rappers in C.W.A., short for Cheeseheads With Attitude. (Really.) Among their many masterpieces is their version of Beck's "Loser," titled "(I'm A) Cheesehead Baby":

The best part of this video, of course, is offensive guard Aaron Taylor and defensive lineman Gilbert Brown — nearing 800 pounds right there — as Brooks' posse. That helps explain this commercial for the song:

My colleague Stephen Thompson, even more of a die-hard Packers fan than I am, claims there's a song that features a guest rap from Aaron Taylor. If any of you know what I'm talking about, you know where to let us know.

Brooks' creative foment reminds me that the most beloved classics of Packers fandom don't always derive from pop hits of the day. Around the same time of the Packerena, a group called The Wizenheimers had a Wisconsin hit with "Go You Packers Go!" (not to be confused with the Packers' official fight song, "Go! You Packers! Go!):

Crunchy guitars, driving drumming and some variant of "Go Pack Go!" — the team's signature chant — is usually a recipe for success. Da Wurst Band In Da World has tapped this vein for some time. Another Green Bay jock-rock anthem, Sunspot's "Go, Pack!" was recently licensed by FOX Sports before its playoff coverage this year. Yet another, "Go Pack Go!" by an outfit calling itself 6 Packers, is currently making waves — perhaps in part because Nirvana producer, Garbage drummer and lifelong Packers fan Butch Vig is a member.

But perhaps the most Wisconsinian of Packers songs is a little ditty by Eddy J. Lemberger titled "I Love My Green Bay Packers." (You can buy a recording via his website.) Here's the original:

You may notice that it's a polka — the official Wisconsin state dance. And the fact that someone would record a Packers polka in 1993 speaks to something about the Wisconsin frame of mind. There's certainly a shared awareness here that, yes, recording an original composition dedicated to one's love of a sports franchise is a somewhat ridiculous thing to do. But even in a state proud of its cheese — Packers fans, famously, have embraced the pejorative "Cheeseheads" — the appeal isn't all self-effacing camp. There's a genuine admiration, a certain jollity and a purity of spirit about wanting to undergo the enterprise in the first place. It comes out in Lemberger's "unplugged" version:

There are plenty of songs I missed. Packers fans, please leave your favorites in the comments. And now: