Accessibility links
Radiohead Fan Maps Out Differing Genres : All Songs Considered Lots of folks tuned in to experience Radiohead's The King of Limbs with our listening party last Friday. One fan turned his inspiration from the album and the band into an genre-mapping info-graphic.

Show of hands: Who caught our listening party for Radiohead's The King of Limbs last Friday? We know designer and Radiohead fan Jamie Gurnell did. 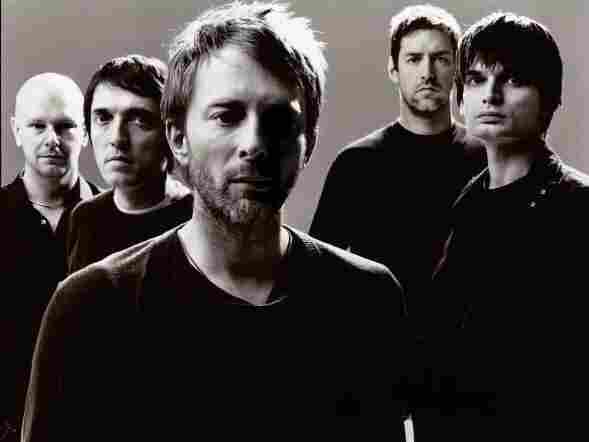 The album itself, and the communal listen, inspired Gurnell to create an info-graphic depicting what he calls the band's unique "genre blending." The image, similar to the work of New York Times contributing artist Andrew Kuo, breaks down Radiohead's tune classification by album with friend Art Commisso. They assigned each album a different color (OK Computer got green, Kid A got blue, and so on) and placed the color-coded triangles representing each song on a grid. 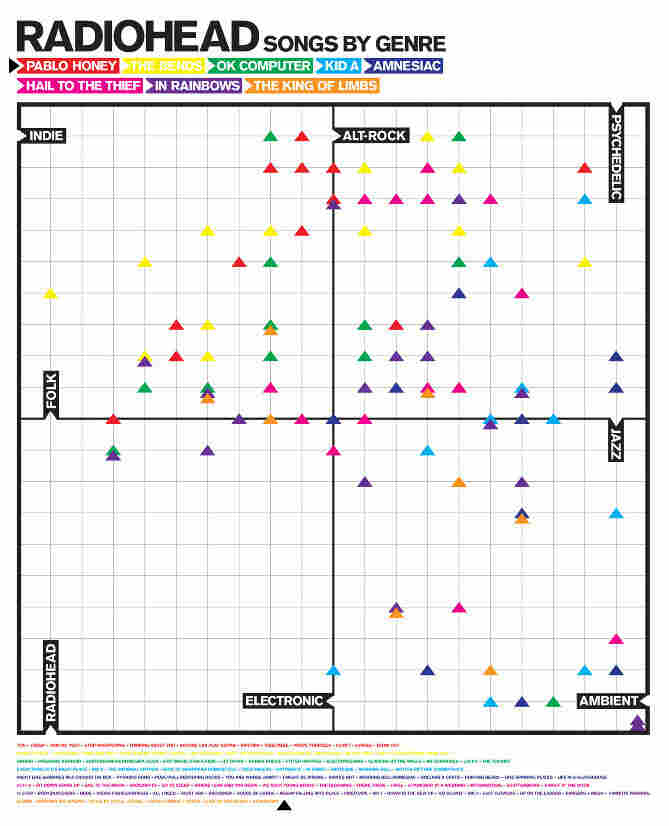 See a larger version of the graphic on Gurnell's website.
Courtesy of Jamie Gurnell

"Radiohead is a band that is the very definition of 'unclassifiable,'" Gurnell tells All Songs Considered in an e-mail. "I developed this idea of bleeding genres into each other and plotting the corresponding songs on a graph. It was by no means a mathematical undertaking and took several hours of quite enjoyable listening and debate to achieve. What you come away with is the basic idea that Radiohead in itself is its own genre, refusing to fit anywhere but inside itself."

Gurnell says it works like this: "Using the four main [genres] we chose (Alt Rock, Jazz, Electronic and Folk), we placed those at the North, East, South and West points on the graph. We then selected four subgenres, placing them in the four corners. This isn't typical of plotting graphs, but we thought it was appropriate. The key thing to notice is that the subgenres work as a bridge between the main ones. Some people may think it over-complicates it, but Radiohead's music is anything but simple, so it fits with the brand.

"It is meant to be discussed," Gurnell says. "It is an ongoing work in progress, and until Radiohead stops making music it will never be finished."

What do you think of Gurnell's eye-crossing project? Does it make sense to you?