Accessibility links
The Flipside With Jack White: Upholstery And His Rarest Records : All Songs Considered As an upholsterer and musician in Detroit, Jack White and a workmate hid some of their rare recordings inside reupholstered furniture. Hear White tell the tale.

The Flipside With Jack White: Upholstery And His Rarest Records 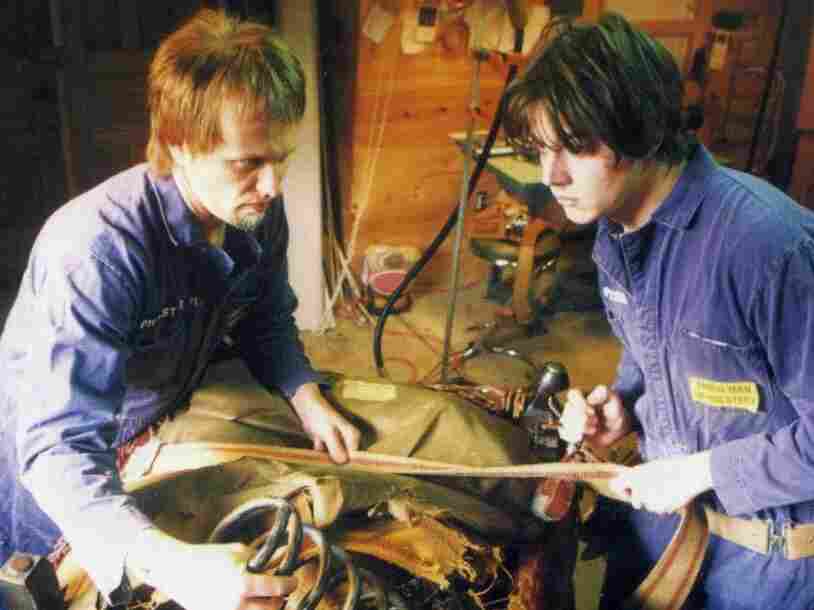 Brian Muldoon and Jack White (right) of The Upholsterers on the cover of the Makers of High Grade Suites 7". Courtesy of the artist hide caption 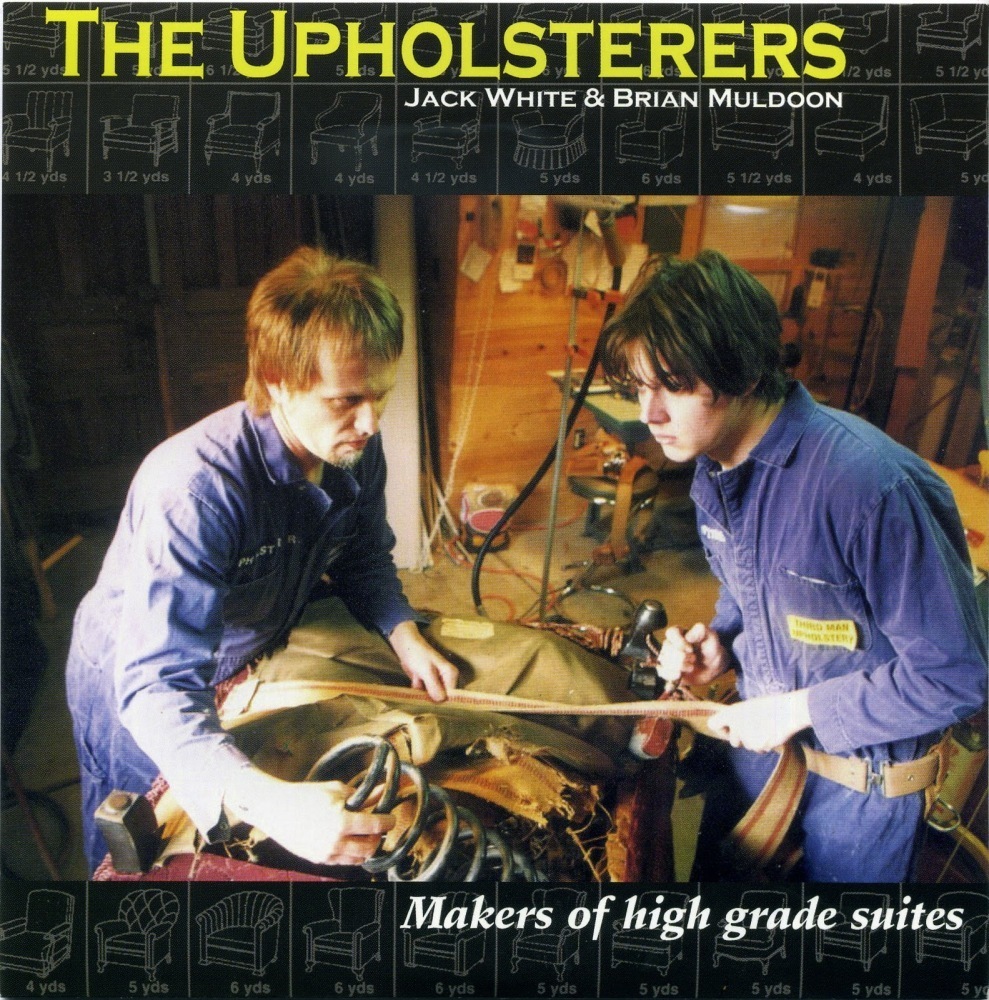 Brian Muldoon and Jack White (right) of The Upholsterers on the cover of the Makers of High Grade Suites 7".

We've been chatting with Jack White about been putting out a series of spoken-word 45s on his Third Man Records label — namely, those two focusing on accents and auctioneering. But back in his Detroit days, he re-upholstered furniture, and even hid copies of his records inside.

In this conversation, White talks about his love of craft and his rarest records.

Jack White: I wanted to be able to talk to people with trade jobs and make records with them. I want to do more records with carpenters, electricians, people who specialize in even more bizarre traits that are off the beaten path.

Bob Boilen: Tell me if this is a true story, now, because I've carried this around in my head and it makes me smile — and this may explain your attraction to craftspeople, as well: You were a craftsperson. You did furniture, you did upholstery. Your furniture place was — what? Was it Third Man...?

Boilen: Its slogan was?

White: "Your furniture's not dead."

White: "Your turntable's not dead." I don't know what I'll do if I open up a funeral home.

Boilen: "Your brother's not dead."

Boilen: Well, don't do that, then.

White: Yeah. [Though] most of the stuff I'd write was on the wood frame in the furniture. 'Cause I thought — something hit me as a teenager while I was apprenticing in Detroit at an upholstery shop. I said to the guy, Brian Muldoon, was teaching me — I said, "How come we don't write notes to each other? Upholsters. We're the only ones who see the insides of this furniture. We should have so many inside jokes and things we could write." You know, "This guy was a jerk. He wouldn't pay for this." We should be telling each other what was the story on these couches. I started to write a little bit about, well, this is where I got this chair and the person who hired me to do it — a little bit of that. [And] maybe on the other side, underneath, I'd hide a poem or something like that.

And then we started to — the zenith of that [was when] Brian and I had a band called The Upholsterers [and] for the 25th anniversary of his shop, we made a hundred pieces of vinyl. We made a record we stuff into furniture that you could only get if you ripped the furniture open. We even made it on clear vinyl with transparency covers — we thought you couldn't even X-ray it to see if it was in there. I'm talking about — really, you could rip open a couch and think it's not there 'cause it's inside the foam — sliced inside the foam and slid in there. I mean, we really went to great lengths to make sure possibly no one would ever hear our record! But it's there. It's so great. It's there. There's a hundred pieces of furniture out there that have those records, and maybe one day someone will find them.

Boilen: No one's found one yet?

White: No one's found one yet, no.

Boilen: How would they even know to begin to look?

White: They could say if they knew the name of the upholstery shop — his was Muldoon Studio. I don't know if — but they could rip open something that's totally... there's no record in there. They would be very unhappy. My guess is, what's gonna happen is it's going to be passed down a generation and some upholster will reupholster it 40 years from now and pull the record out and throw it away. That's probably what's gonna happen.

White: But there's a beauty to it, too! It's just a really compelling idea.

Boilen: Do you ever miss working with your hands that way? Do you ever want to go back and do craft? Is there something day-to-day in your life...?

White: I just rebuilt my upholstery shop last year. I saved all my tools in storage — my cutting table, my sewing machine — so I rebuilt my shop, finally. So I'm doing it again.

Boilen: Wow. Now, would you do this for hire? For yourself? Would you take just your own furniture?

I'd be nice to do a project. We did a record with Elvira, Mistress of the Dark, and I asked her about the settee she always sits on — that famous couch. I said, "Man, I'd really, really love to upholster that thing for you." And she said, "Ah, come on, Jack. If you'd've met me a month ago. I just had that thing reupholstered for the first time ever." I got so mad. I almost wanted to tell her, "Can I just redo it? Can I rip it off and redo it?"

Boilen: Did they do a nice job?

White: Um, yeah, they did a good job. It was okay, yeah. I offered to upholster Conan O'Brien's chair for his new TV show, but they didn't want to use an upholstered chair. I think they wanted something different. But, yeah, it would be nice to do some projects like that.

Robin Hilton: Hey, Jack. You know, something I thought was really interesting that you included in the recordings with Amy Walker and Jerry King... we're listening to you talk to them, and it sounds very much like an interview. And I think I'm hearing news, just a factual news interview. But you end the interviews by asking if everything that they told you is true. And it suddenly made me go back and question everything that I just heard, and it sort of turned it into art more than an interview. Was that your intent? Or, what were you thinking when you asked them that?

White: That was just a question that I threw out at the first Green Series record did with this guy, BP Fallon. I said, "Is everything you said today true?" It wasn't the last question I asked him. It was in the middle. And he said — it was like a second pause — like he was thinking about it, he said yes. And I thought, that's a great way to end the record. It's just become a tradition now. I ask that to everybody, because it's amazing how you'd think that the response [would be] that everyone would quickly say yes, yes, yes, yes. But they don't. I mean, people question themselves. And Amy Walker, who does all the accents, I said, "Is everything you said today true?" And she said, [in an Australian accent] "Oh, it's all true, darling." It's great. And she's not telling me the truth — she's putting on a fake accent to tell you it's all true. How beautiful is that, you know? So it's a nice thing to see with people. Jerry King, Southern gentleman, [I asked] him, "Is everything you said true today?" He said, "Yessir." But it's a nice question to be able to ask.

Boilen: So, Jack White. Has everything you said today been true?