Accessibility links
Minutes From SXSW 2011: Friday Videos : All Songs Considered Want to see a one-minute video by each band Bob Boilen saw at SXSW? Here's your chance to catch up with a diverse and exhausting Friday. 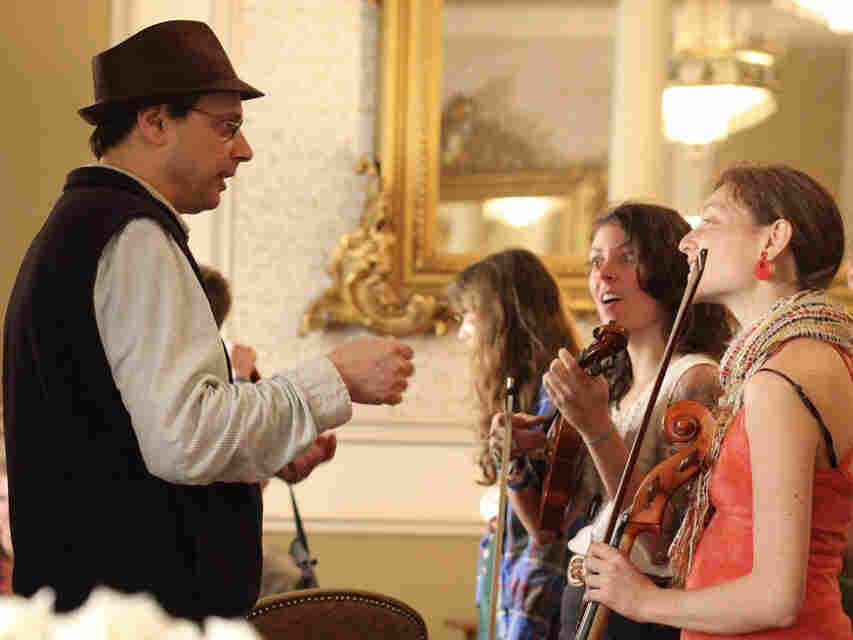 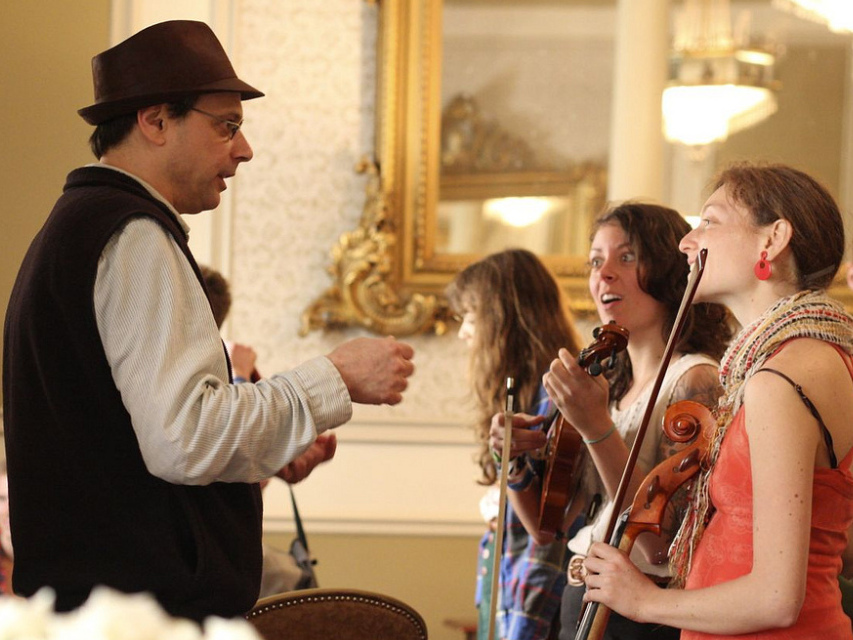 All Songs Considered host Bob Boilen chats with some members of Portland group Typhoon before their Tiny SXSW Concert at The Driskill Hotel.

It was hard to believe my Friday would get any better; I mean, it's only my first show of the day and I'm watching blinking snowmen and dancing under a huge blanket with Terror Pigeon Dance Revolt and the 30 other people who showed up. We all sang about love and hope, and it was only 2 p.m. SXSW life can be such exhausting fun.

Truth be told, my day had started at 8 a.m., just three and a half hours after I'd finished recording, editing and posting one of our late-night dispatch podcasts — those fun data dumps the NPR Music crew has at the end of each night.

I'd been up early to meet Emmylou Harris, Julianna Barwick and then Typhoon for some Tiny SXSW Concert video shoots, in which each artist performed just one song, shot in a beautiful space. We did six of them while in Austin.

Barwick turned the space at the Driskill Hotel into a haunting personal cathedral by singing and looping her stunning voice.

Of the lesser-known bands I loved but had never seen, Typhoon was the band that carried me away. Its songs are full of hope and written from the perspective of someone who could be so bitter; Kyle Morton's childhood was taken away from him by a bug bite; he'd almost lost his life. But with the kidney of his dad, modern medicine and his family and friends, Morton has turned all this into a celebration. Here's Typhoon's Tiny SXSW Concert; a few hours later, I ran to see their whole show, which was so amazing that I did it again on Saturday. I never go to two shows by one band at SXSW, but I saw Typhoon three times.

Before Typhoon came on stage at the Ghost Room, this band called Sugar and Gold came on. I felt like I was watching MGMT's little brothers.

Then on came Typhoon, a band that makes three percussionists seem absolutely necessary — and only a small part of a huge sound.

On my way to my next show, I heard a beautiful voice coming out of an out-of-the-way spot, a club called Lustre. I only stayed for a minute, there were just a few people in the club and there's little I can tell about this band called Twilight Sleep beyond this video and the fact they're from L.A.

Givers was a band I'd picked as a must-see new artist last year. This year, there were something like 500 people packed into Emo's going nuts — a great fun live band. You'll hear more about Givers when the band's record comes out, and that should be soon.

Then it was off to see CALLmeKAT, the singer Katrine Ottosen from Copenhagen. We captured a lovely Tiny SXSW Concert with her last year. She was going to perform as part of a Danish music showcase. While I was waiting for her to play at the Beauty Bar's small stage, a big band from Denmark was performing Pink Floyd-inspired rock on the big stage in the backyard. They're called I Got You On Tape, and even though it felt like more than a bit of a throwback, I liked the music.

CALLmeKAT sang beautifully, and at the perfect moment, a young boy appeared completely enchanted by Kat, for a few minutes at least.

But after so much that was so good, I'm afraid I hit a lukewarm streak. Belle Brigade impressed my friends, but I left after three songs. There's talent in this band, but it didn't appeal to me.

We Are Animal had the hard edge I needed, but I'd forgotten about seeing this North Wales band since I returned from Austin.

Yellow Ostrich was my "Secret South by Santa" gift from Stephen Thompson; we'd each suggested one band for a member of the NPR Music team to see. And, as Stephen said in our SXSW preview show, this gift was much like giving me a bowling ball with "STEPHEN" engraved on it. Yellow Ostrich is a band with promise, but more in tune with his pop tastes than mine.

It was on to Social Studies, a band that I didn't latch on to. The songs seemed well put together, but sometimes it can be hard to shift gears at SXSW, and I wasn't feeling it.

Then came my evening surprise: Agent Ribbons. I'm not sure this video conveys the humor and quirks of this band, but what the duo had on stage was fresh lyric writing and fun interplay. It was a sheer joy to watch and hear Agent Ribbons.

Buck 65 is the moniker of rapper and DJ Ricardo Terfry. I saw him a few years ago at SXSW, playing songs of Leonard Cohen as part of a tribute. The portion of the show I saw didn't always work for me. But I'll keep an eye out for what they do in the future.

I was on a roll again, and it was off to see Owen Weaver, a fun, talented percussionist we'd featured on our SXSW Preview show. Weaver performed scored music on mixing bowls and other odd strikeable objects, along with some recorded sounds. Ultimately, hearing all of those components live would be ideal, but it still sounded creative and artful — a great palate-cleanser after all the guitar, bass and drum bands.

I was excited to finally see The Raveonettes. It would be my third Dutch act of the day — and certainly the loudest and poppiest. But, as I've seen happen too many times at SXSW, the band members didn't get their visas, and I walked into the Rusty Spur with a bummed-out attitude to hear Bear Hands. Turns out the club was over-the-top loud for a band like this. I caught a dose of the group's humor and good playing in the Modest Mouse spirit, but it was after midnight. After 14 hours of music, I needed to go to church.

Now, church at SXSW usually means one of two things: St. David's Episcopal or Central Presbyterian. Both places open their doors for the best late-night special events at SXSW. I saw Jim James and M. Ward perform together one year — and Grizzly Bear another — and they're generally go-to places when you just need to sit and chill. St. David's was closest by a few blocks, the show had already started and it was surprisingly not full. I walked in, and to my delight, Ben Sollee was performing with Abigail Washburn and a talented band of string players and drummers. Sollee is a cellist, singer and songwriter steeped in Southern folk and bluegrass with a hint of jazz and world music. He's a unique talent with a fondness for Paul Simon's speak-singing lilt in his tunes. Sollee was performing a lot of new songs from his record Inclusions, an album that comes out in May. The songs were challenging, with some odd harmonies in the chord structure, but it was a delightful listen.

I could have gone on to other shows, but it felt like the perfect way to end the night, and so it was off to another church — this time a churchyard — to record our evening podcast with NPR's Robin Hilton, Stephen Thompson and Ann Powers. (I saw her sneak into the church during Ben's performance.) You can listen to our late-night dispatches by subscribing to the All Songs Considered podcast.

Every show I saw at SXSW has a one-minute video for you to see; here's more from this year's festival: