Accessibility links
Terry Riley And Big Boi, Hanging Out Like It's Not A Thang : All Songs Considered The father of minimalism and half of OutKast, together at last. (Now, where's that collaboration?)

Terry Riley And Big Boi, Hanging Out Like It's Not A Thang

Terry Riley And Big Boi, Hanging Out Like It's Not A Thang 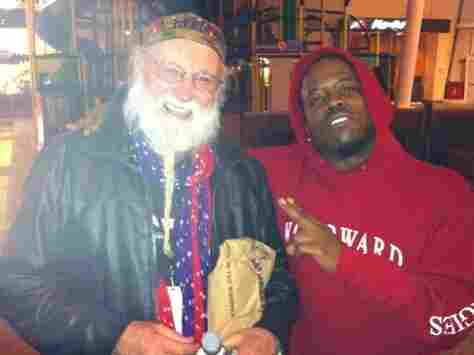 Big Boi and Terry Riley: You didn't see this one coming, did you? courtesy of the artists hide caption

Not only do Atlanta rap legend Big Boi and the iconic, ecstatic minimalist composer Terry Riley exist on the same planet, but now we know that they dine, or at least stop off (together?), at the same food court. Moreover, the sublimely ethereal Riley — he of the rainbow-colored accessories and braided beard — is holding a Burger King bag. Could the man who introduced "In C" to the world possibly be a BK fan?

That particular set of revelations and larger questions brought a certain segment of the music-nerd Internet to a full, thudding stop yesterday, after Big Boi retweeted an image snapped during the All Tomorrow's Parties festival (curated by Animal Collective), which just wrapped up in the seaside town of Minehead, U.K. Both Riley and Big Boi appeared on the wonderfully eclectic ATP bill.

The photo gave sudden rise to dreams of an heretofore nearly unimaginable Big Boi/Terry Riley collaboration. What sonic landscape do you think the combined cosmic forces of Riley and Big Boi might inhabit, if they were actually to step into a studio together?