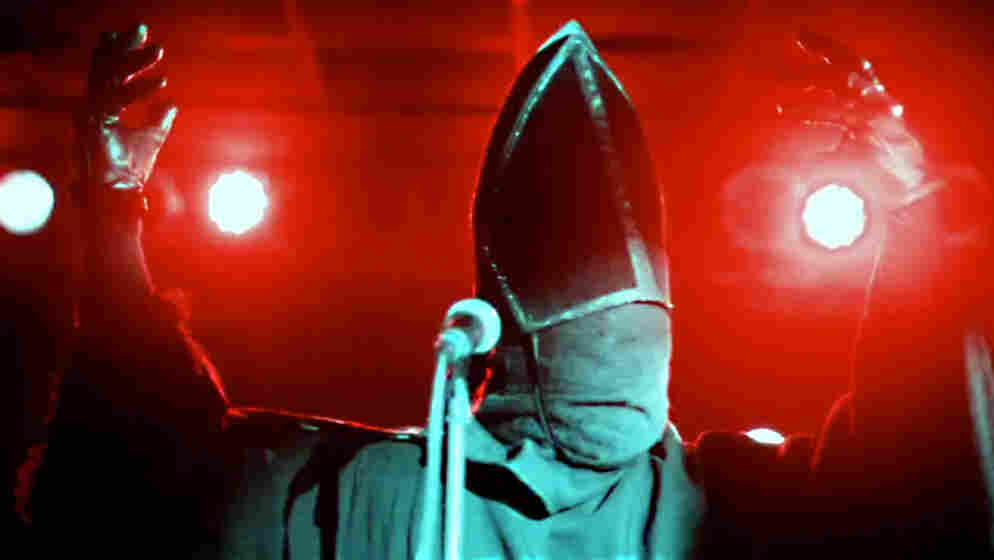 In their ninth year, Maryland Deathfest organizers Evan Harting and Ryan Taylor still curate the most diverse metal festival in the U.S. Spread over four days (May 26-29), MDF features everyone from progressive sludge metal band Neurosis and reunited Swiss thrash trio Coroner to the skull-shattering death/doom Finns in Hooded Menace and the spiraling death metal of Athens, Greece's Dead Congregation. NPR Music will be there in Baltimore to cover the weekend and bring you photos, interviews and live recordings from the festival the following week. You can also follow the action in real-time by following me on Twitter.

For the third year in a row, director David Hall and his crew will be at MDF to film the proceedings. And just in time for the upcoming festival, a limited edition version of the Maryland Deathfest:The Movie II DVD is available for pre-order from Handshake Inc. with a larger release planned for August.

Watch the Portal live video and read an interview with director David Hall, after the jump.

Nothing gave me more nightmares than Portal's 2009 album Swarth. It is pure audio horror, the kind of abstract death metal record that, while a brilliant feat, is almost something like watching Requiem for a Dream for me — I'm inspired by the experience, but don't revisit it that often. And with this first look at Portal's performance from the upcoming Maryland Deathfest: The Movie II DVD, I can confirm both for me and the dead-eyed audience in the film that the experience translates live.

But please, don't let that stop you from watching Portal perform "Illoomorpheme" from Swarth. The intense theatricality of The Curator (he's the guy in the pope hat), the in-and-out focus that threatens to get too close to the horror, the blue and red lights that feel like we're witnessing a very wrong crime scene — visually, it's the makings of an H.P. Lovecraft short story realized by David Lynch.

I got on the phone a couple weeks ago with Maryland Deathfest: The Movie II director Hall in the midst of a whirlwind 48 hours when the festival's venue, Sonar in Baltimore, had suddenly closed and the festival organizers were in the midst of implementing plan B. Hall admitted to me then that the drama would have made great footage for the third film in the trilogy, but the venue has since re-opened and Deathfest is back on track to happen inside and outside of Sonar.

What bands are you most looking forward to shooting at Maryland Deathfest?

Neurosis, for sure, because they're pretty legendary. They always incorporate a lot of cool visuals and graphics into their set. And I really like the band. It's a band I've never seen and never thought I'd have the chance to see. I'm really excited about filming Bastard Noise, a band that doesn't really come down to the Eastern side of North America too often. There's Coroner, of course, with their first show in I don't know how long. It's their first North American show. Cathedral will be interesting — apparently, it's their last show. Orange Goblin, too.

I think it's safe to say that if a band is playing MDF, both musically and performance-wise they're probably worth checking out and worth filming.

I do, I do. If there are bands that I don't know, I'll listen to their music, but I'll try not to watch too much because I like the crew to have their own — especially the camera-operator — I like them to go around and feel their way around it and interact a bit. It's nice to have a few surprises when you get there for filming. 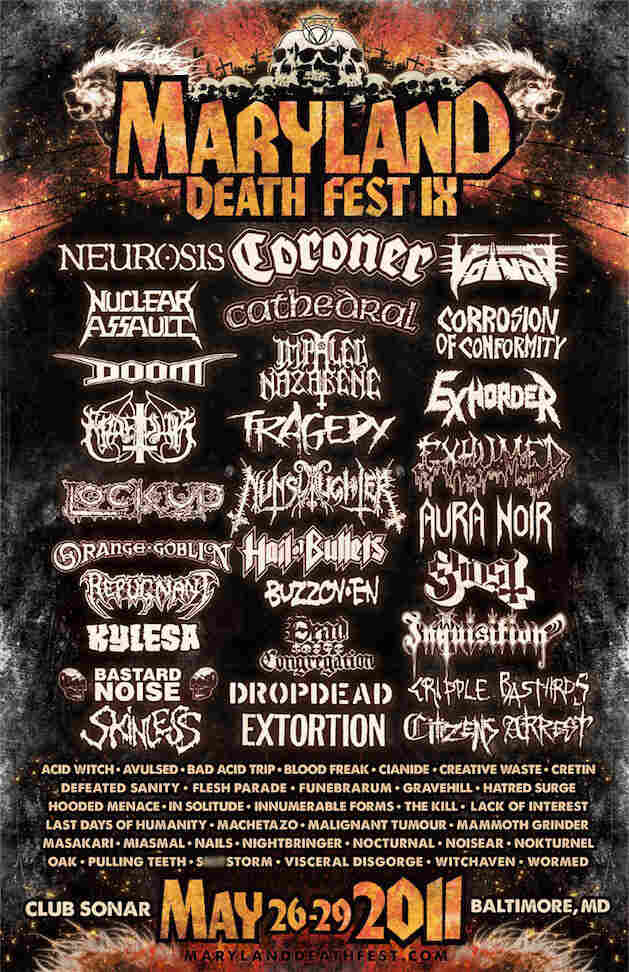 There's a very textured, yet crisp look to Maryland Deathfest: The Movie II. Sometimes it almost reminds me of what little I know about '70s slasher flicks. What directors inspire this?

When I first started making the Maryland Deathfest film, I made it really clear to Ryan and Evan and everyone I was working with that I didn't just want to make a concert DVD. Those are fine and I have nothing against them, but I wanted to try and bring something more to it.

It's not your typical mosh pit. It was kind of people standing there, staring, and being assaulted visually and audibly.

Before I went to Deathfest, I started watching all of the concert movies. And I've always been a fan of concert movies, but the movie that really inspires me the most is the documentary about Woodstock. I think it's probably the best concert film ever made just in terms of style, technique and scope. I'm a fan of a lot of the '70s concert films like Pink Floyd: Live at Pompeii and Altamont [Ed. note: Albert and David Maysles' Gimme Shelter]. Back then you had guys like Scorsese, Truffaut, and Godard — world-class directors making films about musicians. Whether you liked the music or not, you could watch the movie and really appreciate the visual style they bring to it. That's something that me and the director of photography really try to bring. We're not just going to make a traditional, straight-ahead concert DVD. We're going to try to do something a bit loftier than that. That really polarized a lot of people with the first movie. And we've realized our vision a bit more with the second movie.

What are some of the other directors that you've taken your cues from?

If I had to pick a bunch, I'd say David Lynch, Nick Rogue, Stanley Kubrick, Jonathan Demme and Charlie Kaufman. I tend to gravitate towards off-the-wall kind of stuff, but I also appreciate filmmakers who master their craft. That's the way I try to approach things.

Out of what I've seen so far, the Portal performance is the most arresting. It looks like a horror movie. And Portal makes such claustrophobic death metal that when we briefly see the audience in that clip, they're completely transfixed. What was the reaction that night to Portal?

I think for a lot of people it was the highlight of the festival. I think there were people who kind of knew what they were expecting, but [the band] totally exceeded expectations. And then there were people who didn't know what they were getting into and were totally blown away and, like you said, "transfixed." It was hot and I think it was good that they played inside because it added to, like you said, the claustrophobic nature of it.

It's not your typical mosh pit. It was kind of people standing there, staring, and being assaulted visually and audibly.

Exactly. Portal's look — at least touring on Swarth — include hooded robes attached to a noose and a faceless vocalist in a mitre. Obviously, that doesn't come from you, but the lighting adds so much to the video. Was that your input?

No, the lighting is always handled by either Sonar or [the band's] own lighting guy. Visually, the thing that we brought to it was exposing [the video] properly. A lot of people were like, "How are you going to film this? It's almost dark the whole time." It was a big conversation about what lenses we would use and how we would compensate for — because their set is 50 percent darkness. In post-production, it's a matter of color correction, setting the tone and altering the colors. I'm really proud of how that footage turned out. The band loves it too, which is the ultimate thumbs up.

And from what few interviews I've seen with Portal like the one in Oaken Throne, they're not necessarily a band that reaches out.

Yeah, it's nice to make those bridges with certain bands. In the movie, there are at least five different bands that it's the first time they've ever approved [live] footage — Portal, Chasm, Nirvana 2002 and a few others.

You've done a number of music videos for bands like Today is the Day and Jucifer, but I really love the recent Agoraphobic Nosebleed video for "Miscommunication." It looks like album artwork come to life. How do make a video for a 24-second song?

[Laughs.] It was huge for me because [Agoraphobic Nosebleed] is one of my favorite bands. That came out of a lot of conversations with [members] Scott Hull and J. Randall and getting the vibe of what they wanted. That 24-second video took three months. When that one was finally done, I got the email from Scott [Hull] saying, "This is exactly the kind of video we need right now."

What were some of the concepts that y'all talked about? There are lots of layers going on. Basically, I wouldn't recommend it to persons prone to seizures.

To me that video is really straight-forward because I made it and I know the story. I read comments by people saying, "Wow, this is really insane," and it is. But I guess because I made it, to me it's just so linear. To me, [my] other videos — I watch [them] and get way more freaked out by.

What are you hoping to do next?

About a month ago, I signed a distribution deal with Sony Red and Megaforce Records. It's nice that I have a platform to release stuff. About a year ago, I shot a film with Brutal Truth in Winnipeg, Canada. I'm hoping that comes out this year. It's a cinéma vérité, three-day hanging out with the band and filming the concert.

In terms of projects in development, I'm working on a documentary on the producer Billy Anderson. He did all of the Sleep records and a couple of the Mr. Bungle records, [plus] Melvins, High on Fire, Buzzov*en, Cathedral and Eyehategod. This guy's resume is just insane. He's actually coming to MDF with me this year because a lot of the bands like Neurosis that he's worked with are going to be there. We're going to have two camera crews — one crew that's filming all of the bands and then another camera operator that will be shadowing Billy [Anderson] and getting footage of him talking with the bands that he's worked with. I imagine I'll be working on this for at least another year and going out to L.A. where he lives and getting more footage out there.

I also hope to make a feature film for Agoraphobic Nosebleed.

You have a lot going on.

I also have a new film for Today is the Day, which I don't even remember filming. I shot it in March. I'd literally stay up all night editing MDF, get a couple hours sleep, get up, go and shoot this new Today is the Day film. I could not miss the opportunity to make a film and release it when their album comes out [Ed. note: Pain is a Warning is due out this summer on Black Market Activities].

The live Pentagram DVD is coming out on Metal Blade, which was filmed at MDF. It's part of their comeback. I've got a lot of stuff coming in. I can't complain.