Accessibility links
Hear The First Olivia Tremor Control Song In 10 Years : All Songs Considered After staying out of the public eye for much of the past decade, the Athens, Ga., band Olivia Tremor Control is back with new music and a tour. Read an interview and hear the group's first new song since 1999. 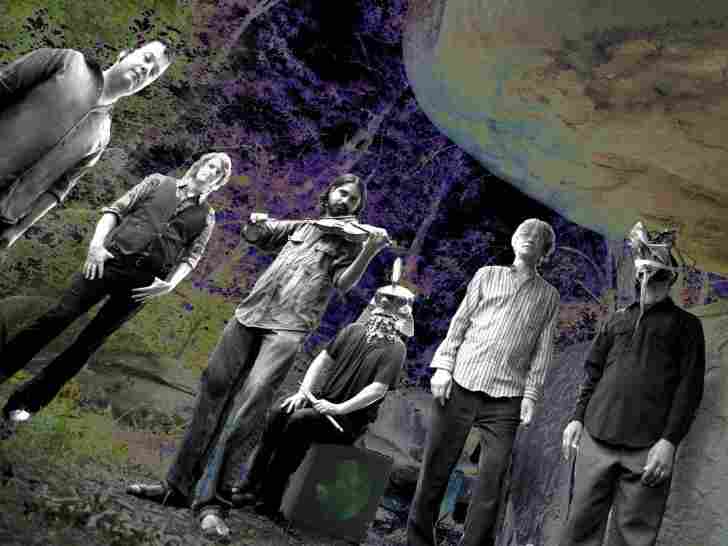 The Athens, Ga., band Olivia Tremor Control released some of the most sonically adventurous, fantastically beautiful music of the mid- to late '90s, then promptly went into hiding. The group didn't break up. But, as frontman Will Cullen Hart said in a recent interview, "Everything happened so fast, and it was exciting, but it was crazy [and] we needed a break."

Now, more than a decade after Olivia Tremor Control released its last studio album, 1999's Black Foliage: Animation Music Volume 1, the band is back with new music. This epic, brilliantly trippy cut, now available online, is called "The Game You Play Is in Your Head Parts 1, 2, 3." 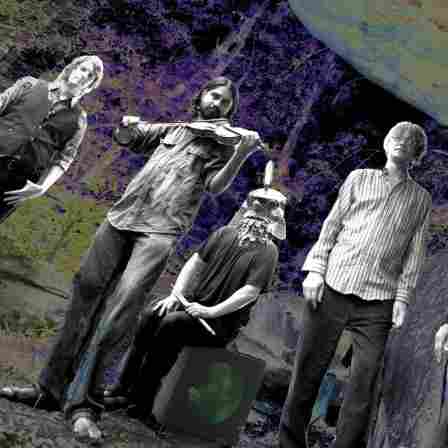 In addition to working on a new album, due out early next year, Olivia Tremor Control is also on tour. We'll live webcast the band's performance from Le Poisson Rouge in New York on Sept. 21.

I recently spoke with Olivia Tremor Control's Will Cullen Hart about the tour, the new music and the band's decision to start recording again.

NPR: So what has Olivia Tremor Control been up to for the past 10 years?

Will Cullen Hart: Tons of stuff, really. We've all continued to work through the years. I have a lot of stuff I've been mining. We never really broke up. It was just that a lot was happening at the time and we didn't want to be pushed into doing too much too quickly or into making bad decisions. Different record companies were offering us stuff, and it was cool. But, you know, you'd go through the contracts and they wanted all kinds of rights and guarantees and we really didn't want anyone telling us what to do. So we were like "f--- it." We had toured for two years (straight) and there wasn't really any time to make music aside from playing live. I record at home, but we needed a break. Things have totally changed now. There's not any major label (deal). The Internet came along, and everything is independent now.

NPR: Why are you back now? What brought you back together?

WCH: Well, in 2005 we got invited to play at the All Tomorrow's Parties festival, and it was great. We did some additional shows around it, but there were my health problems — I have M.S. — that's been a big drain on me. And, you know, I was drinking heavily, lots of hard liquor. [Olivia Tremor Control guitarist and songwriter] Bill [Doss] was like, "You're going to kill yourself! Come on!" So Bill said let's just get together again. And we've just been so happy and having fun. [My health] is getting better. That's really what the deal is. When you're younger, all the time we spent from '93 to '99, time just goes by faster when you're older.

NPR: The Elephant 6 collective that Olivia Tremor Control was originally a part of has been showing more signs of life. There was the tour a couple years ago. Jeff Mangum of Neutral Milk Hotel, also part of E6, is playing shows. Do you still consider yourself a part of that collective, or are you doing your own thing now?

WCH: Oh, definitely a part! There was a time when we called it the "E6 backlash" back in '99. It blew our minds. E6 was referenced in magazines all the time, and we thought, "Wow, this is kind of becoming a tag word or something." We were getting referenced way too much, and I think people started getting sick of the whole E6 idea. That's one of the reasons we decided to take our hiatus. We started [the label] Cloud Recordings. But E6 is more important to me now than ever, after all these years. It was just over-hyped back then. You know, "the Elephant 6 sound." But now I love it.

NPR: Are you working on new songs?

WCH: Oh, yeah. We have tons of bits. Songs that still need work. We probably have 20 or 30 things, almost finished songs. [Sings and hums a few bars.] And there are lots of interlude things, lots of that. I really don't want to put anything shitty out like some bands might do — you know, put out stuff just to put out stuff. But now it's exciting. It's different for us.

I really don't keep up with modern music much. I don't want to be influenced by it too much. Maybe that's stupid. But Jeff Mangum once told me he didn't listen to modern songs, too, and I thought it was a good idea! I like to come at it without any modern influences. I mean, I hear stuff so I'm not totally [out of touch]. But my personal thing, growing up, I grew up with that (psychedelic) stuff and internalized it. I don't set out to write a song like The Zombies, but I do love all that. When Bill and I started Olivia Tremor Control, he used certain production techniques and four-tracks and reel-to-reel machines for the certain sonic quality we weren't hearing out there at the time. This time, we're overdubbing on higher-fidelity equipment, but usually we like it the (low-tech) way. I don't want to spend too much time on it. I have tons of s--- lying around, and I just don't want to listen to my voice 50,000 times, you know? I just want to do it and move on.

NPR: Are you planning a new record?

WCH: Yes! I want to tell you about it, but I really don't know how to put it. Bill has a lot of songs. I do, too. [Drummer] Erik [Harris] does, so does [keyboardist] Pete Erchick. Except for me, everyone else works a day job. Maybe if we'd taken that label contract, we could take days off to work. [Laughs.] But it's kind of hard to get everyone together. But we're so excited about the whole thing right now.

I'm still kind of formulating what the record is going to be. Artwork, themes, that sort of stuff. We're using a bit more higher-fidelity equipment with some "home-fi" mixed in. It sounds really cool, but it sounds like us. We're definitely still working on these songs and how they'll flow together. The lyrics. But it looks like we'll have a five-song suite, like "Green Typewriters" (from the album Music From the Unrealized Film Script, Dusk at Cubist Castle), book-ended with lots of stuff between those. A lot of things seem to be working themselves out. We're gathering a bunch of stuff, but I can't say when it'll come out. Hopefully we can finish it sometime soon, hopefully by the first of next year. Maybe it'll be a double album.

NPR: We're live webcasting your show at Le Poisson Rouge on Sept. 21. What can people expect to hear? Are you going to going to introduce any new songs?

WCH: We'll definitely do some new songs. We're going to play "The Game You Play Is in Your Head" and one of Bill's songs, "Halfway Down." I mean, like, Erik couldn't make this tour, but he was saying, "If we're going to do this, I don't want to just do old stuff." He said he wants to do 50 percent new stuff. A few days later, I was at a show and said, like, "Come on, 40 percent!" When I go to a show, I want to hear the songs I love. So he said, "Okay, 40!" But I enjoy playing the older songs. We do something different every night (on this tour). We've been practicing a lot. We've been hammering a lot out. I would like to start — I already am starting — trying to "increasingly accelerate the current of (my) intuition." Do you know that? It's what [German electronic music composer] Karlheinz Stockhausen once said about making music. We practice every night 5 to 9 or so, depending on each night. So I'm just trying to get everyone moving. We all agree it's something we're all wanting to do, a record and some touring. We're as excited as f--- about it.