A Rose from the Dead 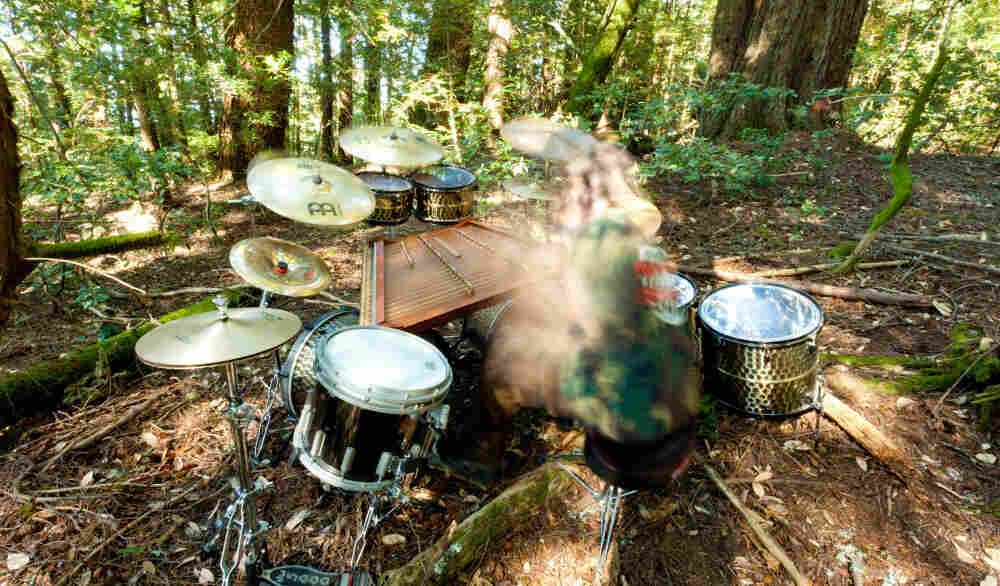 Botanist pounds paradiddles in some kind of ethereally weird black-metal drumline in the name of... plants? Lev Perrey hide caption 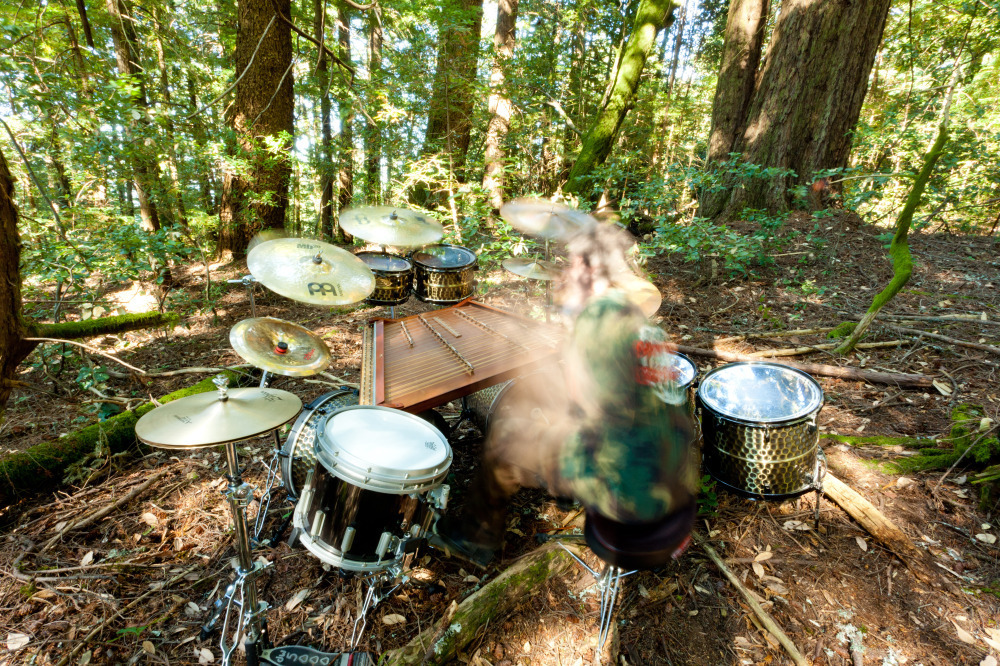 Botanist pounds paradiddles in some kind of ethereally weird black-metal drumline in the name of... plants?

Metalheads can be a nerdy bunch — don't let the battle jackets and grim visages fool you. Most of the time, we're video-game wizards, obscure-history researchers or even beer connoisseurs. So, more often than not, we're attracted to equally nerdy (okay, strange) metal ideas like mysterious musicians who perform in Lovecraft-ian costumery or use mental patients as vocalists. Cue Botanist, a one-man black-metal band whose ethereally weird sound comes from a hammered dulcimer and drums. And, true to its name, Botanist is all about the flora and the fauna, from the artwork to the lyrics. This is like catnip for metalheads.

You'd think a two-disc, 40-track album of creepy, hammered-dulcimer black metal would get stale, but I: The Suicide Tree / II: A Rose from the Dead is surprisingly dynamic and hypnotic. The hammered dulcimer rings out and cuts like a blast-beated piano pounding paradiddles in some kind of black-metal drumline, which you can hear in the longest track from the album (most are a minute and a half long), titled "A Rose From the Dead." 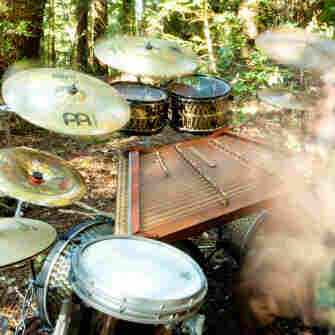 Botanist pounds paradiddles in some kind of ethereally weird black-metal drumline in the name of... plants? Lev Perrey hide caption

Botanist pounds paradiddles in some kind of ethereally weird black-metal drumline in the name of... plants?

Listen: Botanist, 'A Rose From The Dead'

A Rose from the Dead

Of course, some wackadoodle ideas are too good to be true. Perhaps by nature of its insularity, black metal — more than other metal genres — is often guilty of hyping these increasingly weird or disturbing albums that really just sound like any other black metal record. Thankfully, Botanist lives up to its environmentally minded, hammered-dulcimer'd nerdery. And, not only that, but the man behind Botanist has created an alternate world where black-metal tropes — buzzing sound, croaked vocals, bleak aesthetics — exist, but are sonically limitless.

When I called the man behind Botanist for an interview, he said he prefers anonymity — not for mystique, but because Botanist is a "split personality" of himself. (Search hard enough on Encyclopedia Metallum and you can figure it out, but that doesn't bother him.) We also talked about black metal's ties to environmentalism and the most metal plant.

I feel like I need to get the most obvious question out of the way first: Why hammered dulcimer?

I'm a drummer. I started playing drums 10 years ago. I've been in bands that have done some things and a lot of other bands that did nothing. When I started to pitch this idea of Botanist to people, I'd originally thought of making it a two-man grind band with drums and guitars — each person does vocals. No one seemed to want to do this. There was an issue of getting people to show up at the right time. It wasn't happening as fast as I wanted it to. So that was the first thing.

Yes, the songs have complicated plant names, but the underlying theme is that all of these plants are out to get you.

And then, when I was living in Japan, there was a guy on the street playing hammered dulcimer and it was awesome. That stuck in my mind — that was 12 years ago. One time, I went into a world-music shop and they had a hammered dulcimer and I started plunking away. For a drummer, it just makes sense to make melody by hitting things in time. It's a lot more than a xylophone, which is cool, but kitschy. And maybe this is kitschy, too, but it seems so much more rich, traditional and emotional.

What can you accomplish on the hammered dulcimer that you can't with a standard band set-up?

It's not exactly like playing drums, because when you have a tom, you have a whole bunch of surface area, and you don't hold a dulcimer stick the same way you hold a drumstick. But you can play paradiddles on a hammered dulcimer. You can't play paradiddles on bass guitar. I guess you can play paradiddles on piano, but you can't play them as fast. If you want to include drum rudiments in melody, hammered dulcimer opens up a whole new thing that you couldn't really do on other instruments. It's the huge thing that makes Botanist what Botanist is. The original idea was to take hammered dulcimer and distort it through guitar amps, which I did, but then I realized there's no way it could sound like a guitar — and why should it?

The hammered dulcimer has such a history tied to a certain region and certain music: the Appalachian Mountains. Do you feel a kindred spirit to this music? Or is this something else entirely?

Not at all. I don't feel any kindred feelings to Appalachian music. For me, the Western version of the hammered dulcimer is like a Celtic music instrument. Not that I'm attempting to make anything like Celtic music, but it's that much closer to classical music. I can't even pretend to say I know what I'm doing as far as classical music, but what appeals to me in classical music is harmony and scales. This instrument sounds like you took a harpsichord, small piano, maybe a small xylophone and a little acoustic guitar, and mashed them all together. It sounds more classical to me. In terms of what I relate to: Appalachian music, I wouldn't even know the first thing about it.

Everything about Botanist — from the artwork to the lyrics — is about flora and fauna, right down to some scientific track titles like "Glycyrrhiza" and "Chiranthodendron." Where does this interest come from and how does it relate to black metal?

This interest comes from my loving words. I love words very much. I'd often look through dictionaries. I'd find a lot of amazing-sounding words for either insects or plants. This happened enough with plants that I started looking at these words and thinking, "You know, this kinda sounds like a black-metal name." And wouldn't be it cool to do the same thing Carcass did, but instead of opening up the medical dictionary, you'd open up the botanical dictionary and go, "Here's a plant. Let's write a song about this," and call it Botanist. In a way, it's a tribute to a metal institution by doing a different thing with it.

If you want to include drum rudiments in melody, hammered dulcimer opens up a whole new thing that you couldn't really do on other instruments.

That's the geeky side. The more emotional and spiritual side is walking amongst nature, looking at trees and touching them, smelling flowers, looking at how they grow and how they're built. It's a very spiritual connection. It's certainly not a new thing in metal. There's so much black metal that's grown out of the worship of the forest. For me, that really started with Ulver. I think Ulver's [Bergtatt - Et Eeventyr i 5 Capitler] is one of the best records in black metal ever. I think it sums up so much of what I connect with: a spirituality to nature that almost represents it as God, but a God you can't really identify.

Yes, it's about flowers, but it's really about that worship and the misanthropy that goes with black metal — the isolation, excluding the world at large by being alone in the forest.

There is a long history of environmentalism in black metal, from early-'90s Norway with Ulver to present-day U.S. with Wolves in the Throne Room. What do you think attracts black-metal musicians to natural preservation?

I can only take a guess. Again, I think black metal is exclusive, and what I mean by "exclusive" is that it excludes people. That's its twisted take on elitism. I think that there's a great amount of peace felt in what nature can bring. You can have a spiritual connection to it without it being loaded with religion. You can make your own attachments.

As much as you praise and practically catalog plants in your lyrics, there's a violence and power struggle to it, too. Is a song like "Gorechid" a serious metaphor for something or just a really good pun?

Well, I allowed myself to have a few puns. But the theme of the Botanist is this person trying his damnedest to bring about the end of humanity because humanity is destroying the natural world and the natural world must prevail. So in this universe, what would "Gorechid" be? The idea would be human remains splattered all over orchids and his twisted fantasy of what that would be like. And feeding orchids to make them stronger. Yes, the songs have complicated plant names, but the underlying theme is that all of these plants are out to get you.

I stole this question from Invisible Oranges' interview with the person behind Phyte Club, a botanically minded metal site: What is the most metal plant?

The Suicide Tree is the name of the first record, and the suicide tree is, in fact, a plant. It's called a Cerbera odollam. This is a tree that largely grows in India. It tends to grow around bogs and swamps, which is pretty metal. It's called the suicide tree because it has a poison that will you kill you and anybody that eats it. But the deal is that it's very difficult to trace in an autopsy. In rural communities like India, if you want to rub someone out, you put some cerbera odollam in his or her food, and they die. Or, if you want to kill yourself, you take this stuff. In terms of misanthropy and black metal, that's a pretty black-metal plant.

There's also the Cerbera. It's like Cerberus the three-headed dog that guards the entrance to hell. That's f------ metal.

What's next for Botanist?

The next record is coming out in February. It's going to go in a different direction. Botanist will always be drums and hammered dulcimer, but I want to expand on the idea. I never want to make the same record twice. The next record is going to be more doom-oriented. It's a lot slower, but the sound is much bigger. The songs are longer, as opposed to a lot of grind-oriented songs with a short attention span. It's coming out on an Israeli doom label called Total Rust. It's gonna be a double disc again, and the second disc is not going to be Botanist, but a bunch of my friends recording music to drums from Botanist III drum sessions. It's going to have the underlying theme of nature worship with seven other bands. There's going to be one band called Cult of Linnaeus that's going to write a song about the godfather of botany, Carl Linnaeus. It's an amazing song — very heavy, very doom, very downtuned, very crushing.

I: The Suicide Tree / II: A Rose for the Dead is out now on tUMULt, but you'll have better luck finding it at Aquarius Records. You can read lyrics and lore at Botanist's website.