Accessibility links
About A Song: David Bazan On Nirvana's 'Something In The Way' : All Songs Considered Bazan calls the Nevermind song "hymn-like" in thinking about his own live cover version from 2000.

Something in the Way

About A Song: David Bazan On Nirvana's 'Something In The Way'

About A Song: David Bazan On Nirvana's 'Something In The Way' 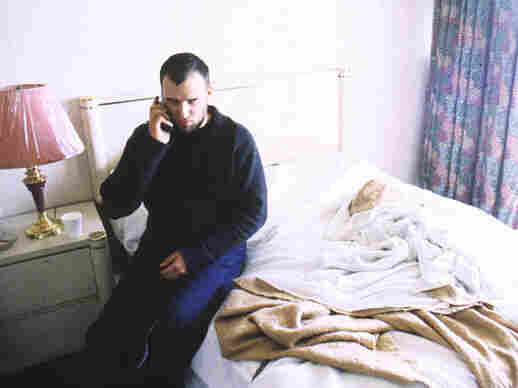 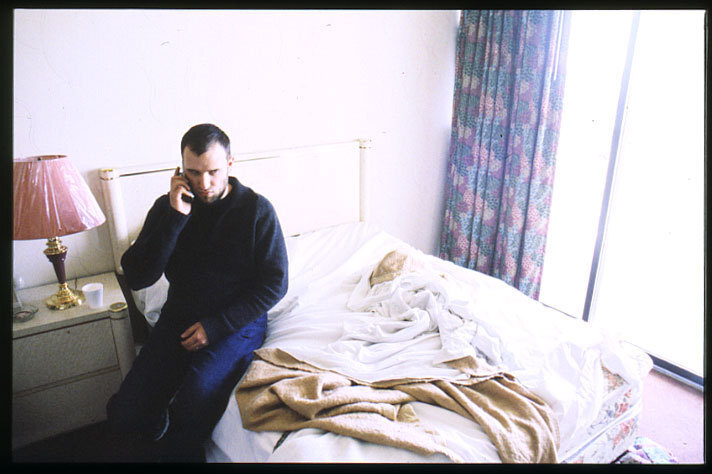 David Bazan as Pedro the Lion circa 2000.

In thinking about Nevermind's 20th anniversary this week, Lars Gotrich is talking to artists who have covered Nirvana's "Something in the Way." We're calling the series About A Song.

Before we hit Web 2.0, if you wanted a live bootleg, you had to know a guy or a series of guys and keep a stack of blank cassettes handy. But around the digital dawn of peer-to-peer sharing, tape traders started uploading their treasured recordings online. P2P sites like SoulSeek and Audiogalaxy weren't terribly organized, but somewhere down that not-so-legal wormhole, I came across Pedro the Lion's version of "Something in the Way." 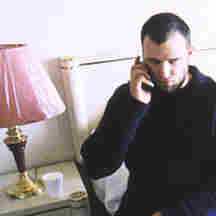 David Bazan as Pedro the Lion circa 2000.

Listen: Pedro The Lion, 'Something In The Way'

Something in the Way

Recorded at the 2000 Cornerstone Music Festival, the track came from a different time for David Bazan. As Pedro the Lion, he had released Winners Never Quit a few months prior — just a peek into the darkness that would set in during the albums to come. Maybe that's why this tape-warbled, solo live version of "Something in the Way" seems so fitting. But when I called Bazan in the middle of his latest "Living Room" tour to talk about Nirvana and where the song fits into his world now, Bazan said he's attracted to the song's hymn-like qualities. You can take the man out of the church...

NPR: I went to a couple of Cornerstone festivals way, way back in the day. Maybe I shouldn't have been, but I was a little surprised to hear a bunch of Christian indie-rock kids singing along to what might be the most depressing Nirvana song. Or maybe that's just the nature of the Pedro the Lion fan at the time.

DB: Yeah, I think that people who would've come by the tent where I was playing, at the moment, were on the fringe of everything. I forgot about that part. I've got to say that I haven't heard the recording in some time, and don't actually have it on anything myself. There's kids singing along?

NPR: You can kind of hear it faintly in the background. You drop out around the second verse where the lyric goes "Underneath the bridge, the tarp has sprung a leak" and you hear the audience carry out the rest of the words.

NPR: I assume you were a huge Nirvana fan growing up, especially being in Seattle. And I know your dad was a pastor. Did you have to hide your Nirvana CDs like I did?

DB: I mean, you know, Nirvana was in the air and everyone had the tapes. I heard it so often that I don't think I owned my own copy of Nevermind. But in my friends' cars who I would ride around with, that was just always playing. So I didn't have to hide that record, and by the time In Utero came out, I was free to listen to what I wanted. Before then, I definitely was not allowed to listen to non-Christian until about '91. In '91, '92, the band started to lift, and by '93, it was just kind of "whatever."

The slower songs are these dirges that really appeal to me because the first songs that I really fell in love with or had really deep experiences with were church songs.

NPR: Take me back to 2000. Who was David Bazan at that time and why did he choose to cover this song?

DB: 2000: We were approaching Cornerstone in the middle of a tour. My booking agent [Trey Many] had a band of his own, and he played in Pedro the Lion. His band was slated to play an instrumental set at some off-the-beaten-path stage, and he only had enough material to do half of a set, so he asked if I do covers for the other half. I decided to play — this is pretty funny — half [church] hymns that I liked and half covers. I think the covers that I chose were kind of hymn-like in their own way: "Something in the Way" and "Fade Into You" by Mazzy Star.

NPR: It's interesting that you refer to those songs as hymn-like. I never really thought of them that way. "Something in the Way" reminds me of those redemption-through-suffering songs that you might've sung growing up in church — the ones that you didn't understand as a kid, but became painfully true when you got older.

DB: My relationship with pop and folk music is definitely through the lens of church songs. [Trey Many] would comment that my songs were — that I was just always writing hymns, basically, because they were so similar to hymns in the way that my song structures and lyrics worked. I think that's what I gravitate toward in pop music. There's a simplicity to the songwriting of Kurt Cobain, in general. On Nevermind, they talk about making child-like music. A lot of his music has that, especially on that record. But the slower songs are these dirges that really appeal to me, because the first songs that I really fell in love with or had really deep experiences with were church songs.

NPR: Both you and your friend Damien Jurado performed this song live within a year of each other. Did you spend a lot of time listening to and talking about Nirvana? Y'all knew each other in high school, right? 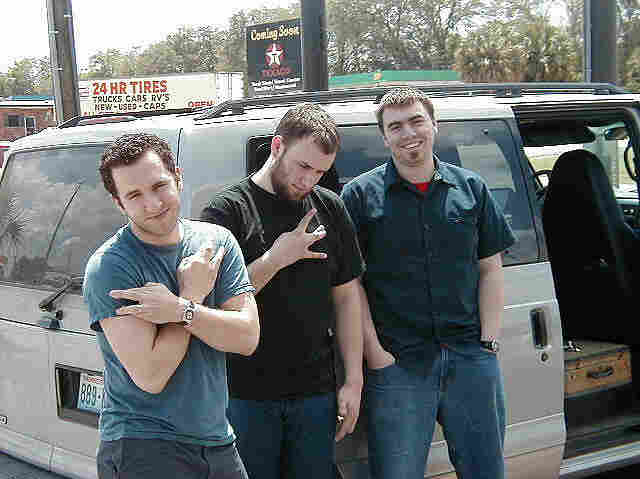 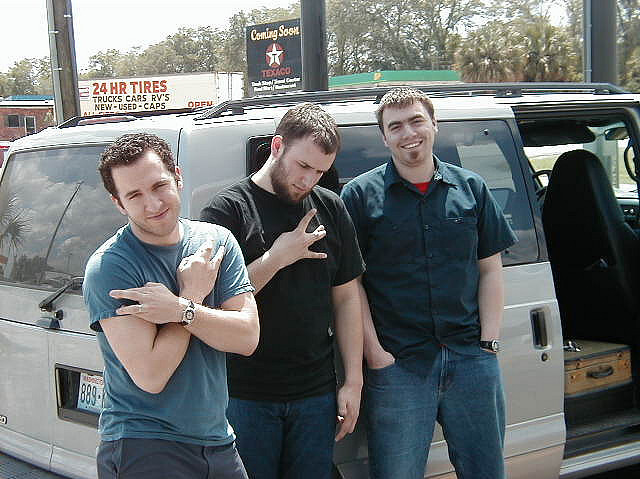 Simpler times, questionable facial hair: Trey Many, David Bazan (center) and T.W. Walsh on tour as Pedro the Lion in 2000.

DB: We did know each other in high school. I think that for us and our relationship, Nirvana was definitely in the air. I think that it was kind of a given, so we didn't obsess over the record together or engage with the records as fans. I think he even knew Kurt a little bit or had an interaction with him early on. I'm not positive about that. [Ed. note: More on that story tomorrow, when my interview with Damien Jurado runs on this blog.]

There was a great respect for that music. That was probably the poppiest music that we would've been sharing together at that point. It was Thirty Ought Six and it all this kind of post-punk.

I feel like Jurado's music has a lot in common with Cobain's songwriting. There's a big influence there. I say that because I responded to Jurado's music in a similar way. There's a very melodic and pop sensibility about it, but it's really dark and really raw. It's funny. I hadn't really put it together like that, but I appreciate them for similar reasons.

NPR: Have you heard Damien's version of the song?

NPR: What draws you to "Something in the Way"?

About A Song, Not A Year: Nirvana's 'Something In The Way'

Damien Jurado On Nirvana's 'Something In The Way'

Thou On Nirvana's 'Something In The Way'

DB: All of the above. The atmosphere of the song, certainly, and musically, the strained way he's singing. It feels like a rainy day. And [the line], "Underneath the bridge, the tarp has sprung a leak," and the fish and there's water nearby — when I heard it, I lived in Seattle. I'd only lived there for a year, and the city was making a really strong impression me. Certainly, there are nice, sunny spring days in Seattle that are the most crisp, most fresh-feeling days of any place that I've ever been. And it seems like light years away from that. But the middle of winter when it's just drizzle all the time — "Something in the Way" evokes that Seattle to me.

NPR: That said, does "Something in the Way" still resonate with you? Does it mean something different?

To break down the song, it probably does some violence to it, but there's an ethical concern that's implied in the song having to do with fish not having any feelings. For me, being in high school, when people would dabble in vegetarianism — I don't know, it still kind of evokes the same kinds of things for me. I feel like it's daring in how monotonous of a song it is, but it has so much feeling. Monotony in itself is a part of the song.

NPR: Up until that point, it was one of the quietest songs that Kurt Cobain had written, but it almost seemed like the heaviest, too.

DB: Yeah, it's the kind of song that would separate people that kind of music hit squarely and people who just didn't get that particular aspect of the counterculture. That song would come on and people who it grabbed by the emotion would be enraptured. And everybody else was like, "What is this whiny bull----?" I remember that happening because it is such a heavy and daring song. But it's the mood of it. And the melancholy of it is so... complete.