Accessibility links
It Came From Creepsylvania: Ghoul's Haunted House Soundtrack : All Songs Considered Find out what's played in the "Darwin Being Disemboweled By Monkeys" room, if you dare. 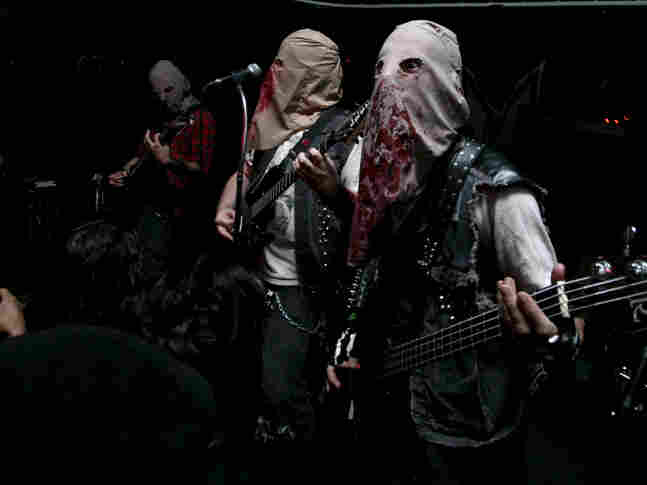 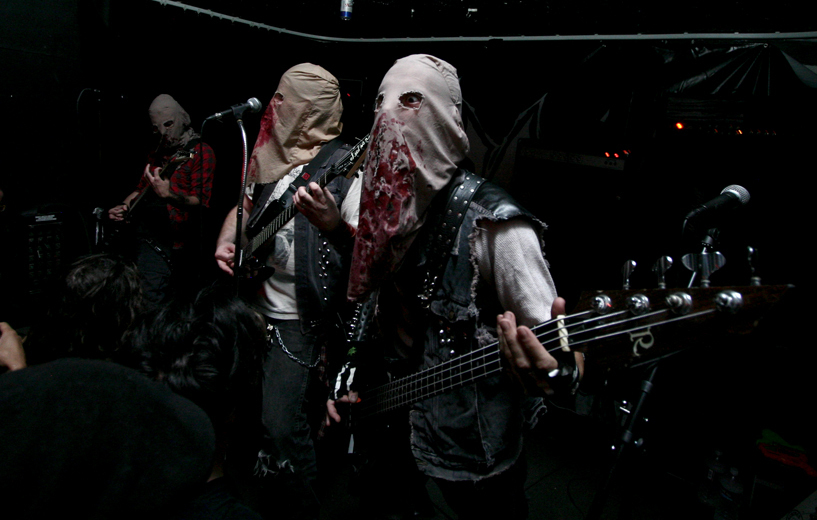 Up in the Volkov Mountains of Eastern Europe (or San Francisco Bay) lies Creepsylvania, a deceptively peaceful mountain community lined with trinket shops. But ask any of the local tar farmers about the hooded n'er-do-wells known as Ghoul that haunt their campfire stories, and suddenly their rosy-cheeked hospitality is ushered with you out the door.

Listen: Ghoul, 'Death In The Swamp' 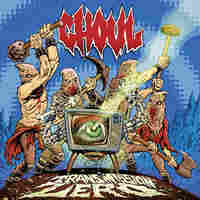 Transmission Zero is out now on Tankcrimes Records. You can listen to the entire album at Bandcamp.

Armed with chainsaws and elbow-throwing mosh riffs, Ghoul is a death/thrash metal band wrapped in a burlap sack, then tossed into a river with a pile of gory '70s horror movies. But Ghoul owns the kitsch and lives it. The band's fourth album, Transmission Zero, is the most fun I've had listening to a metal record all year, full of grin-inducing but skull-splitting anthems. And, with the addition of sci-fi/surf-influenced riffs (as heard in "Death in the Swamp"), it's like Ghoul somehow knew that I wanted a Man... Or Astro-Man?-inspired metal album without me even knowing it.

In the spirit of Halloween and all things bloody, I asked guitarist and vocalist Digestor to list five songs that Ghoul would play in its own haunted house. Let the Creepsylvanian nightmare begin.

When the head of Tankcrimes Records, Scotty Karate, told us we were being asked by NPR to contribute a list of songs to play at a haunted house, we had so many questions. What does "tankcrimes" mean? What the hell is NPR? But, mainly, how did he get our number? Turns out even he didn't know the answer to the first question, but a quick Google search told us that in your country, NPR is an organization designed to interview the producers of Treme. We're still working on how Scotty got our number. In the meantime, here is our list of songs suitable for your very own Hell House.

Depeche Mode: Two words that cause mortal terror in even the hardiest of souls. Though the band is known mostly for hyper-masculine jock-rock anthems, this song was a bit of a departure, and showed a creepy side of the lads that was missing from other recordings. Perfect for the room in your haunted house dedicated to the horrors of public education.

Pretty much any song by Shub Niggurath would scare the pants off most people, but this one is especially creeped-out and bizarre. Spooky organs, atonal singing and weird guitars are guaranteed to wake the Old Ones from their restless slumber. Play it in your "Embryonic Stem Cell Nightmare" room for maximum impact.

Of the two famous punk songs about Halloween, this is probably the ugly stepchild to the tow-headed honor student of the Misfits' "Halloween." But it's not only the better of the two; it also manages to make you feel like a total jerk for dressing like Austin Powers that one time, you spineless conformist. Spin this bad boy in your "Wiccan Blood Cult" room and watch as Jello Biafra's head explodes.

Weirdo freakonaut composer Igor Wakhevitch put together some of the creepiest music this side of Elliott Carter. This little ditty is literally a couple of minutes of howling and shrieking, with some backwards talking thrown in for the hell of it. Adds some class to your "Darwin Being Disemboweled By Monkeys" room.

The Portland brain trust behind Engorged wraps up the list with this riff parade about the fastest, strongest and most cunning animal of them all: the giant squid. Play this song in your "Rock Music Ruined My Life" room, and you'll avoid the indignity of having to pay royalties to Marilyn Manson.