Accessibility links
One Of India's Leading Musicians, Sultan Khan, Dies At Age 71 : All Songs Considered A composer and master of the sarangi, he was beloved from Bollywood to the world's concert stages.

One Of India's Leading Musicians, Sultan Khan, Dies At Age 71

One Of India's Leading Musicians, Sultan Khan, Dies At Age 71 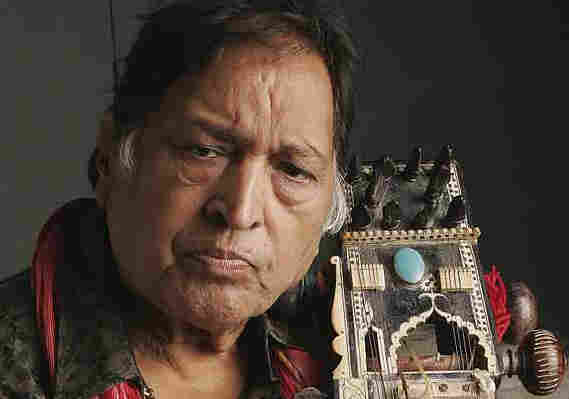 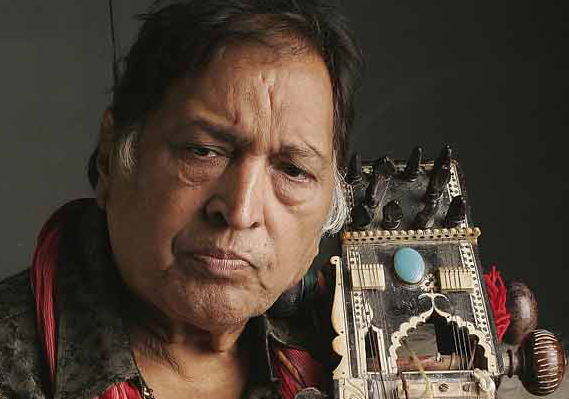 Sultan Khan, one of the most prominent and celebrated Indian musicians of the past half-century, died from kidney failure in Jodhpur, Rajasthan, India today. He was 71 years old.

Born in the northwestern Indian state of Rajasthan to a family of sarangi players, he was usually referred to as "Ustad Sultan Khan"; "ustad" is an honorific meaning "master."

The sarangi — a bowed, stringed instrument whose name means "a hundred colors" and which has a well-earned reputation as an exceedingly difficult instrument to master — faced near-extinction not so long ago. Its mellow sound and fretless construction lends itself to highly ornamented and expressively inflected melodies. It is a natural accompaniment to the singing voice.

But the sarangi's popularity began dwindling in the late 19th and early 20th centuries, until a small number of virtuoso musicians sparked its revival. Perhaps most prominent among them was Khan, whose virtuosity pushed the sarangi into the solo spotlight. He could take the instrument from low, aching cries through dazzlingly fast and imaginative passages.

Within the North Indian (Hindustani) tradition, musicians are expected to be brilliant improvisers and know their centuries-old inherited legacy thoroughly, and Khan was a consummate artist. Last year, he was awarded with one of India's highest civilian honors, the Padma Bhushan. 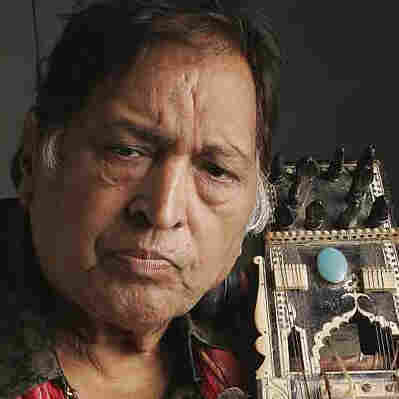 Never content to be hemmed in by the confines of Hindustani (North Indian) classical music, Khan frequently collaborated with musicians from a dizzying array of backgrounds. He was one of the founding members of the ambient/electronica group Tabla Beat Science, alongside American bass player/producer Bill Laswell, tabla player/percussionist Zakir Hussain and producer/tabla players Talvin Singh and Karsh Kale.

He also collaborated with one of the most famous vocalists to emerge from the Indian subcontinent, the Pakistani qawwali master Ustad Nusrat Fateh Ali Khan.

Khan also had a second career of sorts composing and singing romantic songs for hit Bollywood films, including "Leja Leja Re," a duet with Shreya Ghoshal for the movie Ustad & The Divas.

Khan's Bollywood success sprang from his finesse in singing and playing in what's known as the "light classical" and folk-based styles. Like many prominent musicians from Muslim families, he sometimes performed music with Hindu roots, such as this Rajasthani folk song for the joyful holiday called Holi, recorded live in 1992 with his frequent collaborator Zakir Hussain accompanying him.

Despite his frequent forays into other forms, Sultan Khan was a consummate performer of the soulful and virtuosic Hindustani (North Indian) classical tradition. With his bowed sarangi, he could roam from slow, heartfelt cries to explosively dazzling fast runs.