Accessibility links
The Best Metal Of 2011 : All Songs Considered Metallic meditations ruled Lars Gotrich's 2011, but so did knotty death-metal and "The Grain." 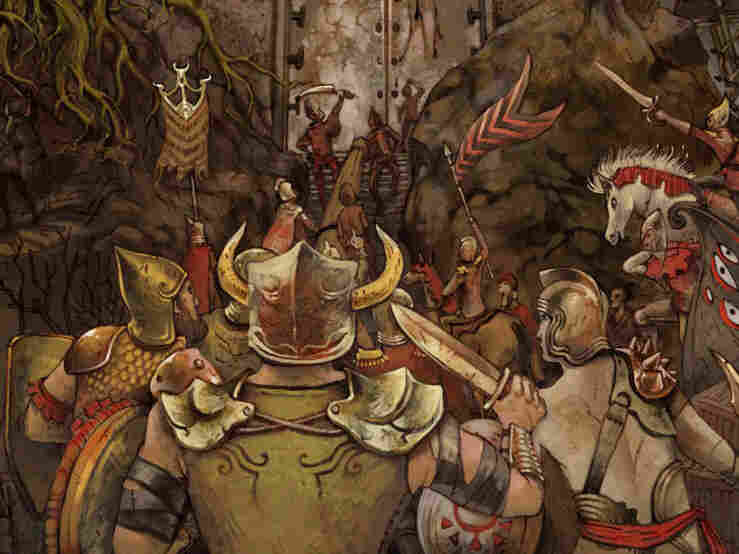 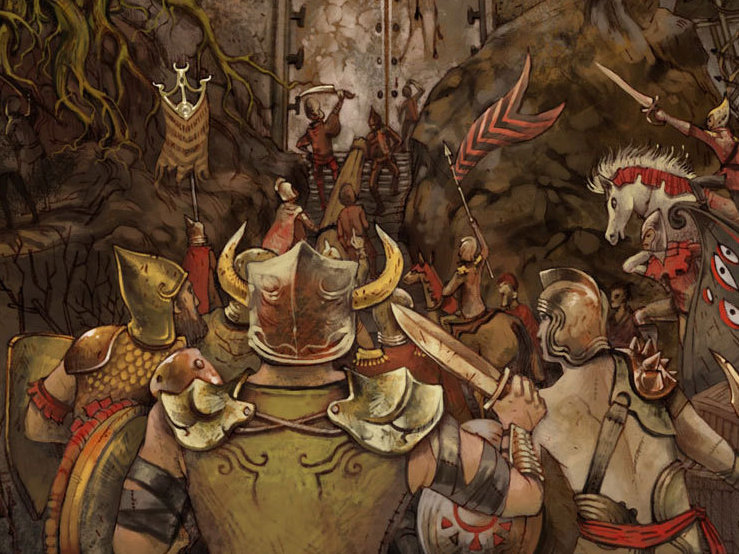 I made it my personal goal to listen to more death metal in 2011. We all have our blind spots and this was a gaping wide hole in my horn-raising knowledge. I'm happy to report that I spent a massive amount of time and cash on these filthy sounds, and particularly fell hard for such harbingers of death like the Nuclear War Now! and Hells Headbangers labels. Strangely, when it came time to rank my 25 favorite metal albums of the year, that investment only landed one album in my top ten: Ulcerate's The Destroyers of All, maybe the most inside-out album of the bunch. What can I say? I'm a creature of doomed and blackened habit.

Hear The Year-End Discussion On All Songs Considered

Black-metal had a strange year: Liturgy pissed off everybody over a thoughtful philosophy that was dwarfed by Hunter-Hunt Hendrix's outsized personality (surprise, an opinionated metalhead!). It created some of the most interesting, albeit tiring, conversation around the genre in some time. (And after much contemplation, Aesthetica was a solidly good, but not revolutionary, record). The year's best black-metal goes to bands that I hesitate to categorize as such: Altar of Plagues is far too spacious and wandering, Ash Borer is the promising next step beyond American innovators Weakling (far more than other copycats), and Negative Plane seems to get at the genre's inherit weirdness more than most, but doesn't care.

Metal's urge to cross genres was also strong in 2011. Tombs, Ulcerate and Flourishing illustrate this aspect best, each exploring the extremities of sound to all ends, tempering blast beats with caustic melody, gutteral darkness with post-punk misery and all sorts of seamless, unlikely pairings.

I'd be remiss to not acknowledge the free-for-all efforts of Bandcamp-based labels like Grindcore Karaoke, Throatruiner, Seventh Rule and, recently, Handshake Inc. There are many more, but these labels have shown that great music doesn't always need a heavy publicity push or a physical product to show merit. Grindcore Karaoke, in particular, is to be commended for over 100 (!) releases in 2011 alone that are actually all worth hearing. That's unheard of.

For some reason, I always limit myself to 25 albums. It makes me ask myself what I really loved and what will still spin on the turntable (or iPod) years from now. You can listen to the top ten of those picks below and let Google guide the rest. As always, I couldn't possibly hear every metal record released in 2011 (though I damn sure tried), which is why reading other year-end lists (and your comments) makes for good filling-in of the gaps. 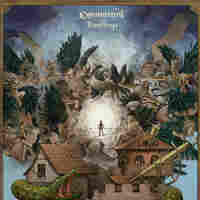 Dwellings is an emotionally and musically complex progressive metal album which wrestles with our desperate and sometimes violent attempts to secure a place in history. It's a heady concept, for sure, and normally I'd eye such academic subject matter with a suspicion, but Cormorant instills an emotional weight into each story and each flawless riff. There's a surprisingly swinging rhythm section between blast beats and an attention to dynamic songwriting that often goes missing in the work of technically-adept metal bands that like to dismantle the genre.

Stream Dwellings in its entirety here and pre-order at Bandcamp. 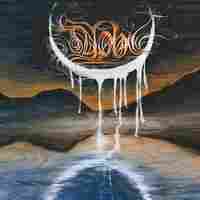 "Prepare the Ground. Awaken." The last words from Atma's lead-off track have been my mantra since August. And that's what YOB's second album since the band's 2009 return from a brief hiatus (and sixth overall) is: A metallic mantra based on repetition that reaches deep spiritual meditation. But outside that ritual is an enveloping doom metal record that sees Mike Scheidt and company stretching beyond the riff. There is a flowering soul here, perhaps best exemplified in Scott Kelly's (Neurosis) anguished guest appearances throughout. The riff is not the thing, the thing is the thing. 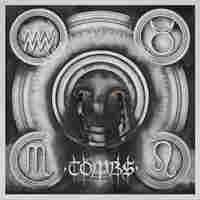 Tombs' second album obliterates everything in its path, gnashing blackened gutter-teeth in the shadowy depths of New York City, which is appropriate given its cryptic lunar-eclipse-referencing album title. It's hard to believe that a distinguished sound this massive and diverse — meshing Godflesh-like industrial poundage, primal grind, droning Joy Division misery, and wintry Darkthrone blast beats — comes from only three members, and that all comes together as something completely new.

Path of Totality is available from Relapse Records. 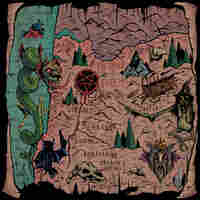 Wing of the Lord

First of all, South of Salem is the best-sounding metal record of 2011. Witch Mountain's first record in a decade was absolutely made for vinyl and the mastering favors a rich, round ring that demands a vintage pair of speakers. Nothing flashy here, just a great live-in-the-room sound. Second of all, few can match vocalist Uta Plotkin's raw soul, a gut-level howl that can just as easily turn into a sinister coo. Finally, those massive, rumbling doom riffs aren't just there to get your slow-motion headbang on (well, they're good for that, too), those riffs want to bore into your skull, crack open a beer and make you a lifer.

South of Salem is available at Bandcamp and will get a re-release by Profound Lore in 2012. 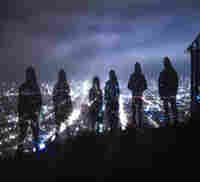 Yes, I was bummed that Ludicra broke up this year, too, but if that gives guitarist John Cobbett more time to focus on Hammers of Misfortune, I'm willing to make the sacrifice. 17th Street was my most anticipated album of 2011 and it did not disappoint in the least. Cobbett loves the hard rock gods of old — Thin Lizzy, Queen, Iron Maiden — and what he takes away is an understanding that solid songwriting can run through his rigorous twists and turns. Just listen to "The Grain" and try not to get the chorus stuck in your head for days. 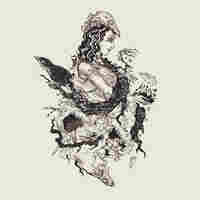 In recent years, shoegaze and black metal have seemed like a luscious idea: Take the dreamy noise of the former and marry it to the harsh mistress of the latter. Too bad most of the results have been uninspired. After a promising demo, Deafheaven signed to Deathwish Inc., a hardcore label good at finding youthful acts (and attracting like audiences) — an odd move, but ultimately a winning decision. My Bloody Valentine's gauzy sheen and post-hardcore's heart-on-sleeve passion drive the turbulent, blackened waters on Roads to Judah, probably one of the more honest displays of anguish I've heard from a genre that tends to be angry for anger's sake.

Roads to Judah is available from Deathwish Inc.

The One and the Many

Sometimes black metal is at its best when it's bonkers-gone-mad weird. Look elsewhere on this list and you'll notice the one-man-hammered-dulcimer faunaphiliac Botanist. And just barely making the cut was Kurdaitcha by global-beat-trance-freaks Mamaleek, seriously one of the strangest black metal records I've heard in years. But strip away the relentless reverb from Negative Plane's second album, Stained Glass Revelations, and what's left is a blackened King Crimson experiment. Or take any of the Possessed guitar solos from Seven Churches, back it into a corner and put it in one of those stretching torture devices ... well, you get the picture. That doesn't make Stained Glass Revelations any less bizarre, just that its abstract Romanticism is every bit as black metal as Darkthrone.

Stained Glass Revelations is available from The Ajna Offensive. 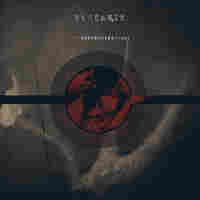 8. Ulcerate, 'The Destroyers Of All'

Set in dark earth tones, Ulcerate's third album, The Destroyers of All, is like a hulking Georges Braque painting come to life. The New Zealand trio reaches inside technical death-metal's machine-gun blast beats and riffs and pulls out a knotted series of entrails. The effect is something like Deathspell Omega's consistently brilliant black-metal abstraction, and likewise makes good use of industrial melody to break up the insanity.

The Destroyers of All is available at Bandcamp. 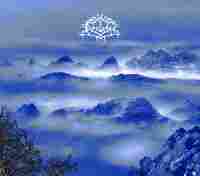 As always, Krallice continues to be very good at what it does, that being mind-melding, long-form discourses through the polymath-metal-cal strata. Eight months after Diotima's release, I'm still finding new layers and new riffs that sharply counterpoint a frankly unbeatable rhythm section on the band's third album. Krallice gets the hipster tag sometimes, but Diotima is not so-called highbrow black metal. It's total sense-obliteration. 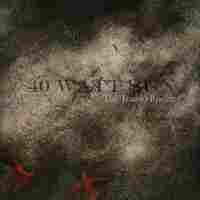 Sad bastards have a place in heavy music — Harvey Milk, Mournful Congregation, and Loss, to name a few — after all, what's more depressing than a bunch of grizzly dudes strumming slow and low at full volume? But sadness can be pretty, too, and former Warning member Patrick Walker gets that. The songs on 40 Watt Sun's debut, The Inside Room, are bleak and beautiful, full of melancholic melodies, a funereal pace and Walker's desperate yearning.

The Inside Room is available from Metal Blade Records.