Note: This is a recurring series in which we ask our unimaginably young interns to review classic albums they've never heard before. Charlie Kaplan is an intern for NPR Music. 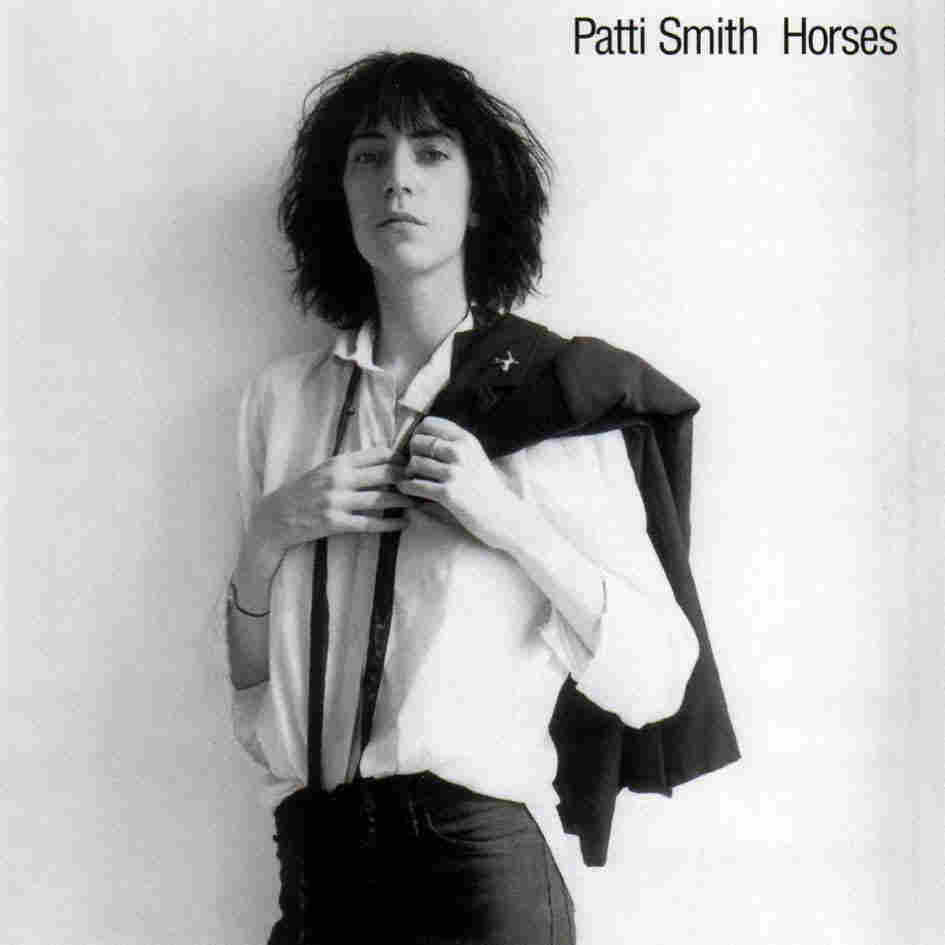 I was loosely aware of two things about Patti Smith and her 1975 album Horses when I signed up to write about them for this feature:

When New York Was 'On Fire': A Mid-'70s Musical Revolution

The first was her status amongst rock's elite, which was mysterious to me. The first major event in my development as a listener happened early in the ninth grade — 2003 or 2004 — when my Dad bought me a copy of Rolling Stone's "500 Greatest Albums of All Time" issue, a pithy exercise in antiquarianism that proved to be as much a musical roadmap as it was an affirmation of the sensibility I'd gotten from my household. The top ten records on the list were things I'd grown up with: the Beatles, Bob Dylan, the Beach Boys, etc. The next 490 instantly became priorities on my trips to Tower Records (doesn't that seem like a long time ago?), and became the albums of my adolescence. I listened to "Ramble On" from Led Zeppelin's II (#76) on repeat before my first real date with a real girl. I kept Otis Redding's Otis Blue (#74) in my CD alarm clock for most of my sophomore year in high school and couldn't listen to it for years afterwards because it gave me a Pavlovian feeling of not getting enough sleep. Other kids might have found their favorite music from friends or the Internet or radio, but I discovered The Strokes' Is This It (#367) and D'Angelo's Voodoo (#480) from an increasingly ratty issue of RS.

So how did I miss Horses, #44? It's nestled between two albums I've spent a lot of time with — Pink Floyd's Dark Side of the Moon and the Band's eponymous album — but I didn't know anyone who had heard it, or had gone out of their way to recommend it to me. Not that this should have been such a deterrent; I had taken leaps on other albums I hadn't heard about — Love's Forever Changes (#40), or Creedence Clearwater's Green River, (#96) — and they had paid off. Maybe it was the cover; there is something disquieting and alien about that black-and-white photo showing Smith leaning against a white expanse in a dress shirt, one hand slinging a blazer over her shoulder, the other clawing her suspenders. I'm sure the androgyny of her outfit and Joey Ramone haircut was shocking by 1975 standards, but that's not what threw me off — I thought she looked cool. It was something about her cold, distant expression; it's like she's thinking about something really terrible that she has to live with in secret. She's leery and suspicious of who she sees on the other side of the record. I knew Horses was important, but there was something about it that set it apart from the rest of that list that made me wary.

The second thing I knew about Horses came from a friend, who told me Patti Smith is considered a poet before anything else. So I decided that, despite being prompted to approach the record with no preconceptions, I would listen to it with the lyrics in front of me, in the hope that they would bring me closer to getting what Horses is all about. That's all had to prepare myself.

I give this back story to express how unprepared I felt for Horses while I listened to it. Song to song, it is challenging, exciting, and so much different from anything I've ever heard. To me, Horses is only music in a strictly technical sense; sure, Smith sings, and she has a band that plays really well, and sometimes she picks up on recognizable styles like reggae or hard rock, but these are only a sort of dramatic backdrop for her lyrics, like a film score, or a beat poet's bongos. Rolling Stone's list had conditioned me to expect the rigidity of song structure, melody, etc., and Horses does not play by those rules.

And as helpful as the lyric sheet was, Smith's performance was the really compelling element to me. The album's opening intonation, "Jesus died for somebody's sins, but not mine" would feel like a stale trope or pose coming from someone else, but feels radical and terrifying when Smith says it. Part of what's so gripping about Horses' first track, "Gloria — In Exelcis Deo — Gloria" (an interpolation of Them's "Gloria") is how changeable and unpredictable Smith makes every element in the song. Nothing takes a single shape for long: not the tempo, the instrumentation, her accent, or the song's idea of gender. Smith sings from the perspective of a male narrator, all lupine lip-licking, but even his personality is in chaotic flux, distorting grotesquely as his libidinal advances intensify. Smith's narrator isn't rejecting atonement in his opening statement — he is relishing the depravity of what he can't wait to do, acts Jesus probably wouldn't have bit the big one to atone for, if he could take it back. And all this is coming from a woman, narrating as a man, preying on a woman. It really makes you rethink Van Morrison's early material.

The album then gets increasingly demanding and confrontational, and focuses on themes untouched in rock music preceding it. Disfigurement and escapism — surrealistic and almost one and the same here — emerge as prevalent themes. On "Break It Up," both the narrator and the boy she fixates on tear their skin off, turn into angels, and fly away from their hellish, earthly existence. On "Birdland," Smith's voice vacillates between beat poetry, Sprechstimme, and rock vocals as a boy realizes that his late father is, in fact, not dead but an alien, right before he is mutilated by a flock of birds, abducted by said aliens, and transported to another dimension. "We love birdland," she concludes.

Suicide also recurs as a theme. On "Redondo Beach," Smith settles into a stylistic form — peppy, jerky reggae — to sing about her narrator's girlfriend committing suicide. Suffice it to say, this juxtaposition is dissonant, dark, and left me feeling a little sick; in other words, it was effective. In the album's incredibly powerful and upsetting centerpiece "Land/Horses," — which reminded me of the band Suicide's "Frankie Teardrop," which would come out two years later — a boy named Johnny is raped, gets addicted to cocaine, and commits suicide. Smith's poetry is affecting here; Johnny's emotional collapse is a herd of horses, "white shining silver studs with their nose in flames," his ultimate act "a butterfly flapping in his throat."

"Land/Horses" also reprises lyrical themes from "Gloria — In Excelsis Deo — Gloria," again conflating rock references — particularly to dance — with sexual predators and assault. Close to the end of the song, Smith repeats a line from "Gloria," "humping on the parking meter, leaning on the parking meter," now transformed from an image of sexual appetite into a motif of victimization. This perspective and reinterpretation of the optimism and sexual liberation of the '60s is, to me, the central idea behind Horses. An outsider to that moment in time, Smith sees the injustice obscured by the pop patrimony.

Horses was hard to enjoy, but I think that was the point. Having been squired by Rolling Stone, whose '60s-centric sensibility was much of what Smith took aim at, I probably had a similar initial reaction to this album that critics swaddled in the Beatles and Stones did. Going back to the "500 Greatest Albums of All Time," for the first time I picked up on the obvious bias of the list; it was compiled, the issue's introduction proudly proclaims, by "An eclectic and stellar panel of experts — including the Rolling Stone editors, Fats Domino, Flea and Britney Spears," who "voted on the following albums, by everyone from Abba to ZZ Top, from Robert Johnson to the White Stripes." After listening to Horses, the Hands-Across-America diversity represented by "Flea and Britney Spears" and the faith-restoring ecumenism that somehow managed to place Robert Johnson and the White Stripes on the same list doesn't sound quite as impressive to me as maybe it did to Rolling Stone when they wrote it.

And stylistic or mainstream homogeneity isn't the only problem; this list shows how inherent and rationalized misogyny is in rock. For every Patti Smith or PJ Harvey on this list, there are scores of Van Morrisons and the Doors — hell, almost half of Led Zeppelin's catalog appears in the top hundred. Patti Smith knows this. Again and again on Horses, she succeeds in abusing the conventions of rock to highlight what was taboo or unusual in the culture she was writing in, and, I realized, in Rolling Stone's critical gospel today. Horses sits high on that list, and sticks out like a sore thumb among the Chuck Berry Boy Scout Troop around it. It's a discouraging tribute to its continuing relevance that its roommates in Rolling Stone's pantheon bear such an uncanny resemblance to the landscape it was born into in 1975.

So my reaction to this album is a little complex. Its subject matter is painful to listen to, but the spirit of its exposition is inspiring. Horses is equally hard to return to because it feels so full of pain, but is so brilliant that it's hard to stay away from. I feel a little deeper having lived with it for a month, though, and I know it's a great work, even despite its weaknesses (I feel guilty at how much the karaoke instrumental of "Kimberly" reminded me of Wesley Willis). I still feel the chill of Patti Smith's suspicious gaze when I look at the cover of Horses, but now I feel like I can explain it a little better.

For more on Patti Smith and many other New York-based musicians who developed new sounds in the mid-1970s, listen to Bob Boilen's conversation with Will Hermes about Will's new book, Love Goes to Buildings on Fire: Five Years in New York City That Changed Music Forever.