Accessibility links
Leonard Cohen In New York : All Songs Considered The iconic singer/songwriter shares stories about life and the songs on his new album, Old Ideas.

The Crack In Everything Lets The Light In: Leonard Cohen In New York

The Crack In Everything Lets The Light In: Leonard Cohen In New York 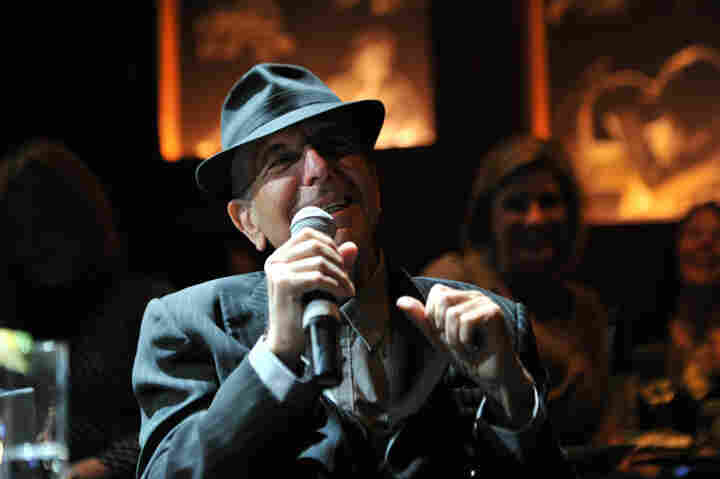 Leonard Cohen at Joe's Pub in New York City. Performing live after years away from the stage "warmed some part of my heart that had taken on a chill," he says. Mike Coppola hide caption 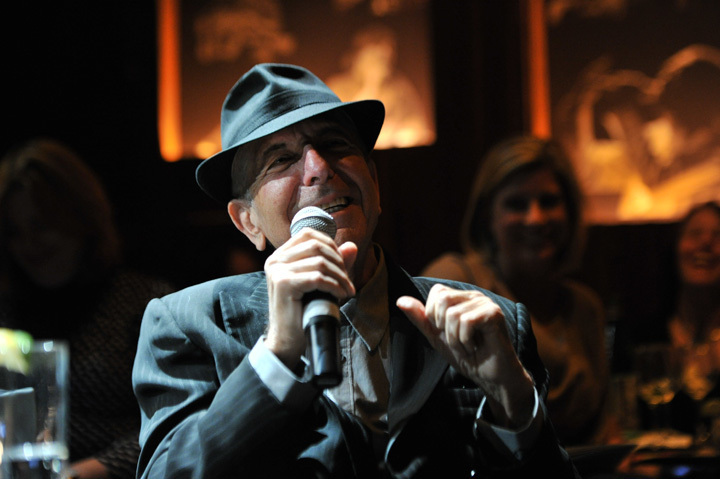 Leonard Cohen at Joe's Pub in New York City. Performing live after years away from the stage "warmed some part of my heart that had taken on a chill," he says.

Those are the words that open the new Leonard Cohen album, Old Ideas, out January 31. The the first studio recording of new songs by Cohen since 2004's Dear Heather, it comes on heels of a massively celebrated tour that marked his return to the stage after more than a decade away. Last Friday, members of the press got a chance to listen to Old Ideas in Cohen's presence. He appeared at Joe's Pub in New York City for a listening party that was followed by a Q&A session moderated by WFUV's Rita Houston. The album doesn't come out until next week, but you can listen to the album now; to complete the experience, we thought we'd ask Rita to fill us in on her conversation with Cohen.

The last time Leonard Cohen came to town, it was for a show at the Beacon Theatre, his first U.S. concert in 15 years. The subsequent tour was a huge success. Did it influence this new album?

"It couldn't not have," Cohen answered. "I was living a kind of hermit's life, for about 10 or 15 years, I didn't know if I'd ever go back on the road, and a certain distance grew ... I think the writing I did took a certain theological or philosophical bent, it became somehow distant from the beating pulse. For financial reasons I was forced to go back on the road, to repair the fortunes of my family and myself, and this was a most fortunate happenstance. I was able to connect with living musicians, and then with living audiences, and yes it did have a great effect, it warmed some part of my heart that had taken on a chill."

Cohen was a published writer and poet before he was 20, and began writing songs after that. The early earnings made him a traveller, a man of the world. The length of his creative run has rivaled the best of them, from those early days through to his late '70s.

Asked whether he's reached any epiphanies now that he's in his later years, Cohen quotes his friend and literary mentor, poet Irving Layton: "Leonard's mind has not been contaminated by a single idea."

His speaking voice is amazing to listen to, and like any good storyteller, he knows how to use it. His off-the-cuff anecdotes come out structured, with story arcs, colorful vocabulary and punchy endings. 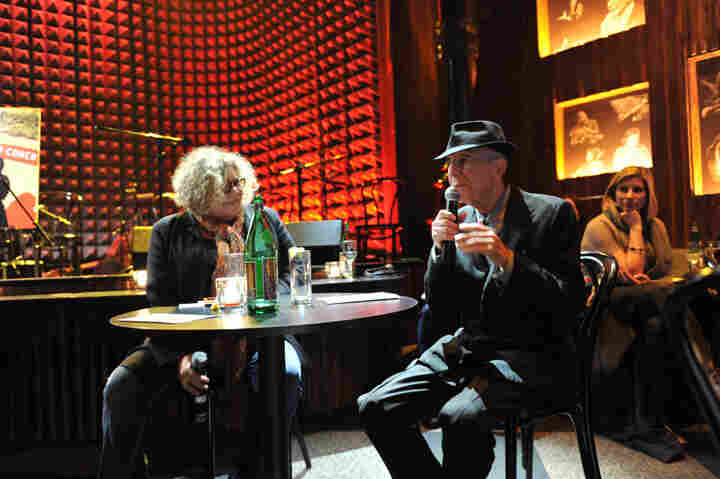 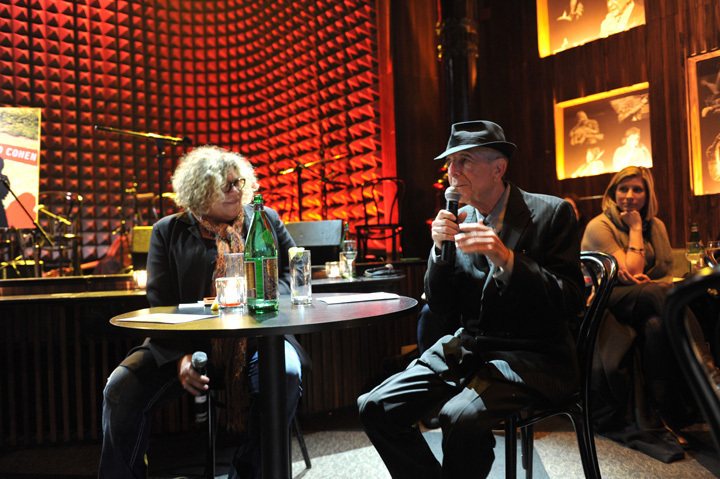 Were we imagining it, or is his voice lower than ever? "Yes, my voice is getting lower and lower, because I gave up smoking. I expected it to rise, but it's gone the other way," he says.

"I'd like to take up smoking again when I'm 80. One of the things that makes me want to tour again is smoking on the road." He hopes to rehearse a band and tour with these new songs soon.

When he is out on tour, he's accompanied by the women who sing through, around and behind him on his songs, creating his signature sound. Old Ideas is no different. Cohen credits Jennifer Warnes, Sharon Robinson, and Dana Glover with all the vocal arrangements, and says that when they talk, he listens. He brought them the songs and they took it from there.

He's reluctant to say too much about where his inspiration comes from, but reveals that "Banjo" came from Hurricane Katrina. "After Katrina ... I saw that culture dismantled, and I think that the image of a broken banjo floating in the dark came out of that deep discomfort that had been imposed on all our psyches."

Some of Old Ideas is quite new, some quite old, and some a mix. "Going Home," for one, has long-ago lyrics, while their transformation into a song is new.

Which of the new songs is the most meaningful? "I don't like to annoy or anger any of the other songs by stating a preference," he quips, "but 'Show Me the Way' came together with astonishing speed."

It's too tempting, sitting in the East Village, not to ask for any memories of his time living here. He thought a minute, coming up with one he could share, and pulled this from the time he lived in the Chelsea Hotel in the mid-1960s:

"Edie Sedgwick was living a few doors down. Through her door came all the most attractive men and women of the period, I was not among them, but I longed to be among them. There was, on the corner of 7th Avenue and 24th Street, there was a Mexican magic store, with potions, candles and powders, which could be used to draw influences into your life — to secure love affairs, or to guarantee successes. My situation was such at the time that I believed in them, so I bought a couple of candles, and a book about candles — I just read that, and the I Ching, though I couldn't follow anything from one paragraph to another. At a certain point, through some graceful accident, I was invited into Edie Sedgwick's room. It was filled with very beautiful young people. It was dark, and illuminated by candles, 30 to 40 candles, burning everywhere, on plates, on the stove ... I had no credentials at the time, there was nothing I could say. I walked into the room of her glittering crew, and I said, 'this display of candles is extremely dangerous.'

"So, I presented myself as ... an Expert in The Candle. And this did not go over well. So I left at an appropriate time. The next day, her apartment burned down, and my prestige soared."

While we're looking back, is there any advice he would give the young Leonard Cohen? He answers this question with another quote from Irving Layton. "We were close friends, and he'd ask me what my plans were, what I was doing, and I'd tell him, and he'd shake his head, and say, "Are you sure you're doing the wrong thing?"

Right or wrong, Leonard Cohen is back with a set of songs that bring some hints of optimism into the usually dark musical world he lives in. Asked about the sense of peace and acceptance you can hear in the new songs, and where that source of light is from in his life, he replies, "It's probably not a good idea to do an autopsy on a living thing."