Accessibility links
The Man/Machine That Makes The Tesla Coil Sing : All Songs Considered Watch musician Max Weisel "play" a bolt of lightning on the set of Bjork's Biophilia.

The Man/Machine That Makes The Tesla Coil Sing

The Man/Machine That Makes The Tesla Coil Sing 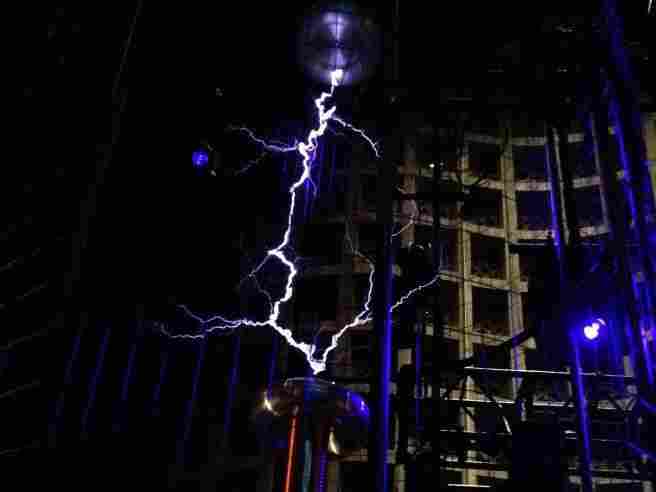 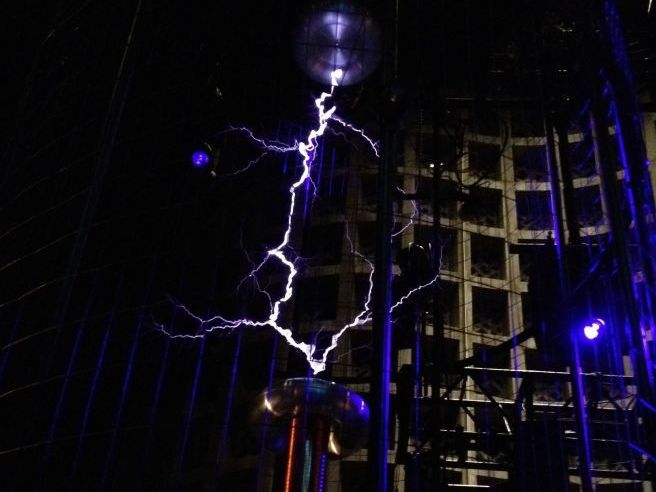 There were so many amazing moments during Bjork's performance of Biophilia at the New York Hall of Science this week: the four pendulum harps that made music, the dome-shaped wok-looking instrument that played beautiful bell-like sounds when struck.

You can find a review of the show's opening night by Will Hermes, with great photos, elsewhere on this blog, but I want narrow the focus a little bit. For me, the most memorable and mesmerizing instrument was the Tesla coil that played melodies. Melodies that were fierce, sharp and unsettling. It was somewhat frightening to see bolts of man-made lightning dangling over the audience and then fascinating to hear and see it play a song.

When the show was over I stuck around and saw the young musician who "played" the Tesla coil, something usually confined to horror films. And what I found behind the scenes was almost as compelling as the Tesla coil itself.

Max Weisel on the set of Bjork's Biophilia

I met Max Weisel, a software engineer who made apps before Apple had an app store. He's 20 years old and he plays most of the electronic sounds as a member of Bjork's band. In this video Max takes me on a brief tour of the instruments he plays, in addition to the Tesla coil. We begin with a strange musical instrument called the Reactable, a table that senses patterns on blocks and interprets them as music.

If you found the Reactable fascinating then you should try the Reactable App and, of course, Bjork's album Biophilia, the centerpiece for this live performance and these new instruments. Biophilia is not only an album but it's the first album-app designed for the iPad. As an app, it's an interactive experience that let's you play with "lightning," play with shapes and cells and all sort of objects that control the sound.

This all feels like a beginning with so much promise for new elements to shake up the song form. I recently played a concert and used an iPad in live performance. I used a program called Audio Palette, which I found incredibly expressive and endlessly fascinating. Knowing there are so many bright young creative teens and young adults out there who know a world bursting with amazing technology, meeting Max Weisel fills me with hope and has me excited for what's to come.