Note: This is a recurring series in which we ask our unimaginably young interns to review classic albums they've never heard before. Dominic Martinez is an intern for NPR Music. 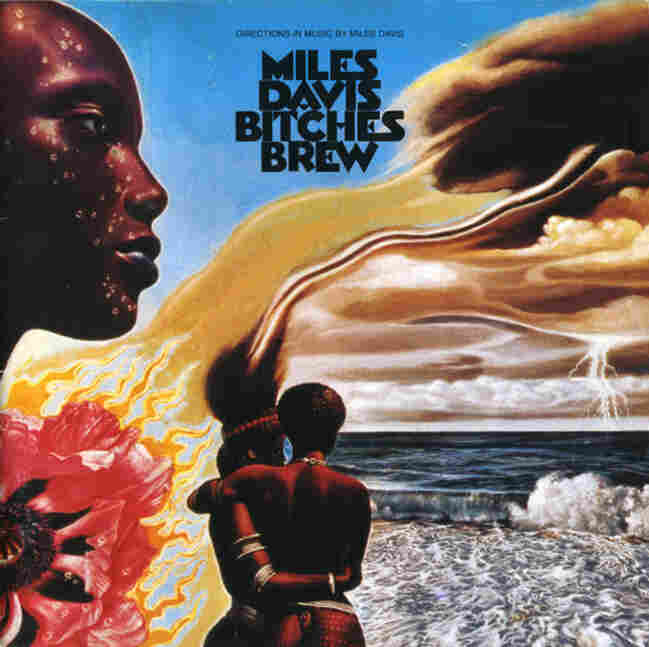 As a gigging jazz bassist, I am fully aware of Miles Davis' work and importance in the genre. "So What" was the very first jazz standard I ever learned, eight years ago in the ninth grade. Kind of Blue, as cliche as it may be, is one of my favorite jazz records of all time — it just never gets old for me. Like countless numbers of jazz musicians, Miles' music taught me a lot about how to be a jazz musician — how to musically express yourself clearly, how to be cool on the bandstand, and most importantly (for me), how to play in a combo as a tight cohesive unit.

I was digging everything Miles did ... except for his jazz fusion work. For a while, my entire knowledge of this era of Miles' career came from YouTube videos of live concerts or studio sessions from the '80s. It all was too weird for me. Seeing videos of his groups from that era just left me with a bitter taste in my mouth. I was confused. The Miles I thought I had figured out, who taught me so much about jazz, had become a washed-up madman. Why was he playing with an electronic drum set? What's with all the extra percussion, the 20+ piece drum kits? What in the world was he doing at the 1982 Grammys?

Now, I did not think jazz fusion as a whole was terrible — Weather Report's Heavy Weather was one of my favorite jazz records and I loved a good "Chameleon" (Herbie Hancock) jam every now and then — but from my first encounters with Miles' work in that genre, the borderline tacky over-instrumentation of the rhythm section and the overall sound just did not do it for me, thus leaving me with this negative association between this legend and this genre.

This negative association was the main reason I had never listened to Bitches Brew, the record that defines the start of Miles Davis' jazz fusion era. What also turned me off was the large number of musicians on the record — three keyboardists, two bassists, and two drummers — I thought this many musicians was quite excessive, which increased my skepticism about how the group would sound overall. I was afraid that this group would lack the tightness that was the trademark of both of Miles' great quintets.

It's really a shame that I ignored Bitches Brew because of impressions of other music that was not even from the same decade. The record was released in 1970 — Miles had shown himself capable of making big musical leaps in spans of a decade or less, like from Birth of the Cool (recorded in 1949) to Kind of Blue (released 1959).

When I finally decided to give the album the proper listen it deserved, as I was halfway through the first half of the opening track, "Pharaoh's Dance," I quickly realized that these notions of mine were fairly ignorant and flat out wrong. Not only was Miles still cool, but he brought cool to a whole new level. The music didn't sound tacky, not at all like the music in those bizarre YouTube videos. "Pharaoh's Dance" was a funkier and edgier continuation of In a Silent Way — established by the blended textures of the Rhodes, Dave Holland's bass, John McLaughlin on guitar, and Bennie Maupin on bass clarinet. That synth-driven sound that I often found so off-putting from Miles' work in the '80s was not to be found anywhere in this record.

I was mistaken in thinking that Bitches Brew's "new jazz sound" would come from an overload of electric instruments. This record certainly introduced a new sound in jazz, but it was achieved by the perfect combination of electric instruments (keys, guitars, bass), percussion instruments like the congas and the shaker and other spontaneous noises, like Miles' high-registered squeaks. There is certainly a greater presence of electric instruments than in his earlier records, even as recent as In A Silent Way, but they blend so well with the other instruments. The record may be a bit overproduced for my tastes (for example: a bit too much reverb with Miles in the title track), but the overall instrumentation still feels organic.

Bitches Brew does have the funk and rock grooves that I would expect from any jazz fusion record, and which did make me a little hesitant at first. After listening, I came to accept and appreciate these grooves as an integral part of the music. It is easy to get lost in the solos of 15+ minute tracks that at times sound almost abstract, yet the ever present groove grounds each tune for the listener.

What really sticks with me about Bitches Brew is that it is full of improvisation with a free/avant-garde spirit. Much like In A Silent Way, the musicians don't play within a certain form or set of chord changes, not even a head (or central melody). The rhythm section just lays the groove (sometimes even a non-rhythmic ostinato pattern of notes, like in the beginning of the title track) and each musician simply plays along, solely relying on what everyone else is playing.

The result is pure brilliance; aside from Miles' great quintets, I've heard very few ensembles play as closely-knit together as this group did. Even though the musicians are of such high-caliber (Chick Corea, Wayne Shorter, Joe Zawinul, Dave Holland, Jack DeJohnette, Lenny White, among others), it still amazes me to see that a group with that many musicians can create such a tight sound, following each other in whatever direction one decides to go. I'm astounded that this togetherness is achieved with not only multiple keyboardists and guitarists, but even more with multiple drummers and bassists. They may not all play at the same time, but everything still all flows so well — it's musical cohesion taken to a whole new level, sustained through all 94 minutes of the record.

Miles' group accomplishes this cohesion because of one element: groove. During my studies on bass, the importance of groove in music has always been emphasized to me — Bitches Brew is a true testament to this. Without the groove, it would just be cacophony.